Paradise ponders: another chaotic day edition...  When I last posted, I was anticipating getting more work done on the window frames for the cattery.  Guess how much I got done?  Nothing.  Nada.  Bumpkiss...

Early in the morning I took our little girl field spaniel (Cabo) down to the vet for her appointment to get spayed.  We've been worried about her and her brother Mako (who hasn't been neutered).  Sometimes their play looks more like ... doggie foreplay.  We wouldn't want her to get pregnant by her brother, and we wouldn't really want her to get pregnant by some neighborhood dog who jumped the fence when she went into heat – which could have happened at any moment (she's 14 months old).  So off to the vet she went.

In the afternoon I went and picked her up.  She was the very image of a totally miserable dog.  She whimpered piteously all the way home, and I could do nothing to comfort her (I was alone in the car, driving).  When I got her home, she was obviously frightened and we think still feeling the effects of the anesthesia.  We did our best to comfort her before we went to bed, but then her miserable, piteous whimpering tore us up.  I went out and got some pain meds into her, got her to drink a bit, then tried going back to bed again.  More whimpering, and she sounded very frightened.  Probably was, as this is the first time anything like sustained pain has happened to her, and she couldn't do anything about it.  So I went out and got her, and we brought her up on the bed between us.  She was trembling, panic breathing, and very upset.  About 15 minutes later she was calm, nodding off, and breathing normally.  A little while later she showed signs of engaging with Jahar, our Savanna cat (who was extremely unhappy about this canine in the bedroom, which so far as he is concerned is his territory).  So I took Cabo back out to the kitchen and let her stay outside her crate all night.  She was fine after that.  I got up around 3:30 this morning, and when I went out to our kitchen she scampered over to see me, all cheerful, tail wagging, and looking like her normal happy self.  She was excited when I got the leash to take her for a walk.  I'll be doing that for the next week, as we don't want her to start roughhousing with Mako, which is her normal daily activity. 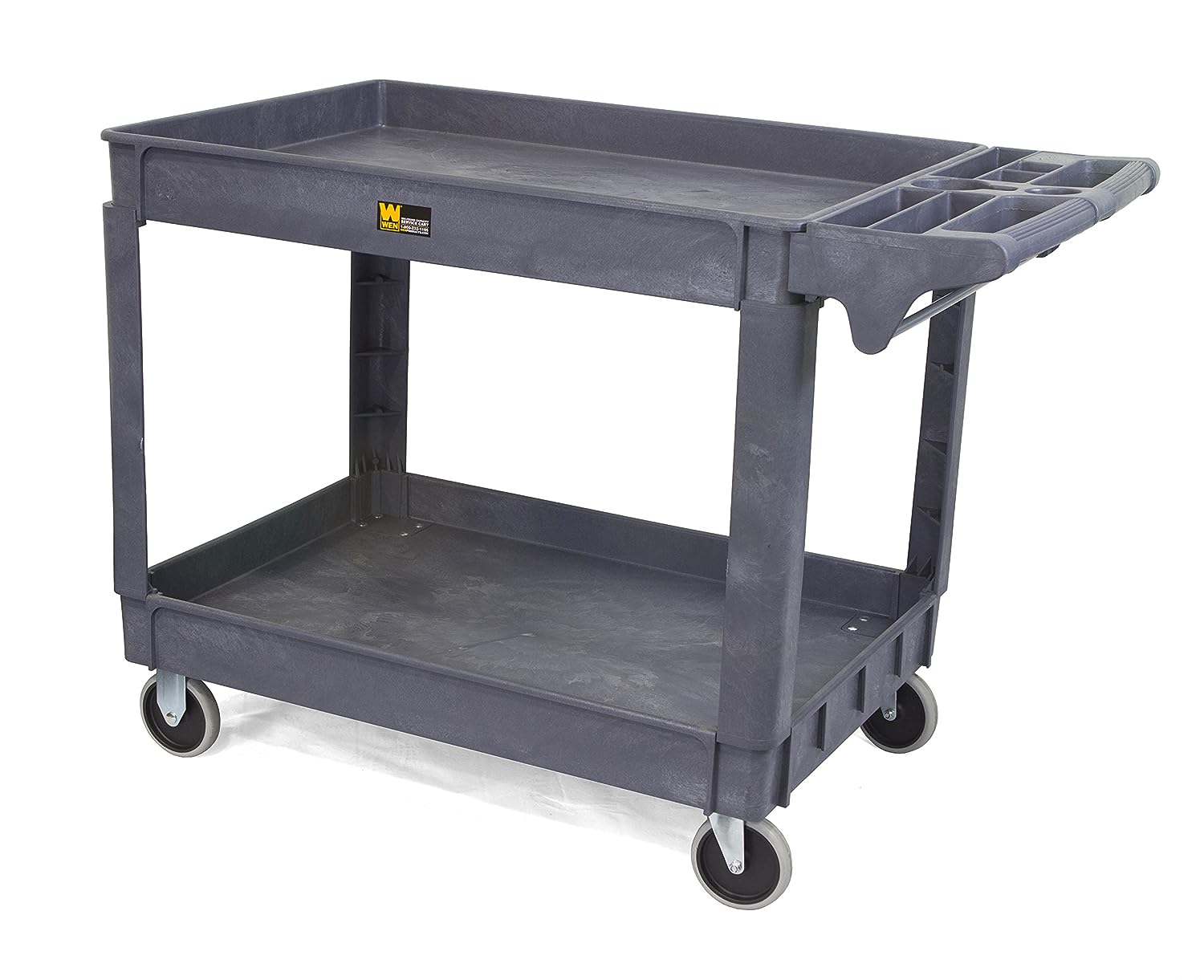 This morning I put together a tool cart I'd ordered that had been delivered yesterday afternoon.  It went together easily, all the parts were there, and the end result looks quite nice.  It's made in China, and the quality is very good.  But ... while I was assembling it, I kept running into stickers saying things like “The wheel treads contain chemicals known by the State of California to cause cancer” or “Do not eat” printed on a bag of nuts and bolts.  That got me to thinking ... the workers in China who put these notices on things ... if any of them can read English, they must be rolling around on the floor laughing at the stupid Americans (most especially the Californians).  What kind of idiot has to be told not to eat a bolt?  And really, if such idiots actually exist, could they read?  Wouldn't it really be better in the long run to let such people eat bolts and let nature take its course?

As scheduled, a two-man tech team (Dustin and Justin) from Comcast showed up to install our gigabit Internet service.  Turns out we're one of the very first people in Cache County to get this service installed, and we are the first on the particular distribution amplifier our home is fed by.  They warned me they were likely to be here a while, because the signal had to be perfect for the gigabit Internet to work, and in their experience nobody's installation was perfect.  So they did their testing for signal levels, and ... our installation was perfect.  That's because, of course, we've had two recent visits from other Comcast techs to fix the intermittent problems we'd been having, and in the course of doing that they replaced (literally) every coaxial connector between the tap on the utility pole and our modem.  They also bonded our cable ground to the power ground.  Some combination of this fixed our intermittent problem – we haven't had a single outage (not even for a few seconds) since the last part of that effort.

So the gigabit Internet modem worked on the first go.  We thought we had a kind of weird problem with the web management interface, but that turned out to be a browser compatibility issue: it worked fine on Chrome, but not on Firefox or Safari.  With Dustin's test equipment we got 1020 mbps download and 44 mbps upload.  On Debbie's iMac (the most modern piece of gear we own), she gets 818 mbps download and 43 mbps upload.  Awesome!  Our iPads are getting 200 mbps download over WiFi, which we've never seen before.  Out in my office I'm still limited to 100 mbps down because of my underground backhaul being limited to that speed, but I am getting 40 mbps upload.

But my favorite part of getting the new gigabit Internet has nothing to do with the speed.  It's a privilege derived from being one of the first.  I now have in my position the cell phone numbers of Dustin and his supervisor – and an invitation to call for help directly should I need it.  They'd also like feedback of any kind.  They'll probably regret giving me these numbers.  Or maybe they'll change their numbers after a while.  But I'm cherishing the thought that I won't have to go through the automated voice messaging system to get to a tech the next time I have an issue...

Yesterday's UPS brought the components for my new 1,400 mbps radio backhaul link to my office.  Another project! :)  The antennae are larger than I'd imagined, over a foot in diameter.  Once I get those puppies up, I'll have super-duper high speed Internet in my office, too.  Woo hoo!

These days my attention to politics is mainly limited to trying to anticipate what the government might do that I need to react to in some manner (change investment strategy, buy more guns and ammo, change insurance, move to Mars or Estonia, etc.).  I can't help but learn about some “Trump stuff” along the way, and as always, it's a seriously mixed bag from my perspective.  Some things I really, really like (such as his appointment of Neil Gorsuch to the Supreme Court).  Some things make me cringe (like inviting the evil Duterte to the White House).  Others demonstrate an ignorance of policy or politics that make me think he really is the blithering idiot the progressives make him out to be (like the timing of the Comey firing, or his tweets on trade policy).  What throws me the most, I think, is that he doesn't seem to have any of the motivations of the “normal” politicians I detest.  You'd think that might be a good thing.  But I can't figure out what his motivations are, either.  I've pretty much given up on trying to predict how he might decide to come down on any particular issue.  I've also pretty much concluded that he has no more power to get Congress to take action than Obama did (both came into office promising they'd change the way Washington worked, and neither were able to do so).  I won't be very surprised if he resigns tomorrow, nor will I be surprised if he declares martial law and sequesters Congress without food or water until they pass a budget, tax reform, and health care (I might actually support that move!).  Bottom line: planning in the age of Trump is even harder than in the age of Obama.  At least with Obama I could be fairly certain that he'd come down on the wrong side of every issue I cared about, from my perspective.  I have no idea at all what Trump is going to do!

I spent quite a bit of time yesterday with Mark T., who's starting the installation of a pop-up sprinkler system for our lawns and landscaping.  The first step is for him to plan where all the sprinkler heads will go, and to figure out what kind of head is needed for each spot.  I'd never really considered this before, but it's actually fairly complicated.  First there's the question of flow rate: the water laid down per square foot needs to be the same for all the sprinkler heads in any given zone (because they'll all be turned on-and-off simultaneously, and therefore need to complete their job in the same amount of time).  Then there's the “throw” needed for each sprinkler.  Our yard is very oddly shaped, so the sprinklers can't be placed in a regular pattern.  Another consideration for placement is to keep as much water off paved surfaces as possible – and that also means controlling how broad the pattern is (360°, 180°, etc.).  Yesterday, after lots of questions for me, he finished laying out all the sprinklers for our front yard and the “golf course”.  Those areas will take 141 sprinkler heads.  I'd have guessed perhaps a third of that!  He'll be laying out the back yard this morning, and there will likely be another 50 or so sprinkler heads back there.

The booster pump, filters, and controllers for the irrigation system are all going to be mounted near our fuel tanks, on a concrete pad behind our outbuilding.  These need to be protected from the weather, so I've ordered an 8' x 10' cedar shed to contain them.  Assembling that will be yet another project, once it arrives! 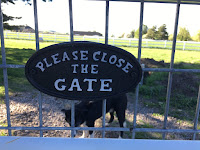 I posted a few days ago about the scary escape of Cabo and Mako when a construction worker accidentally left one of our gates open.  Debbie had a brilliant (and simple!) idea the next day: to put signs up on all five of our gates asking people to keep them closed.  I ordered the signs the next day, and they arrived yesterday afternoon.  I put them up as my last work of the day.  They're painted cast iron, and should last longer than we do (though they may need painting every few years)...
Posted by Unknown at (permalink) 6:56 AM No comments: