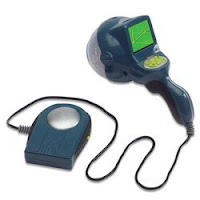 Amazon had a toy on sale just before Christmas, at a price I just couldn't resist – so I bought one. Shipping was free, because I'm an Amazon Prime member. It was so cheap, I figured even if it was a total bust, I'd only have wasted the price of a couple cups of fancy coffee.

The thing is called an EyeClops, and it's a combination microscope/video camera/still camera – and you can upload the results to your computer.

The results exceeded my expectations, by a long shot. Below are three photos I took this afternoon with my new toy. The first one is a digit on a wooden slide rule, at 100x magnification. The second is another digit, at 200x. And the third is the very fine fabric covering my mouse pad, at 400x. Considering the price I paid, I'd call these results absolutely remarkable. Click on the small photos to get a larger view... 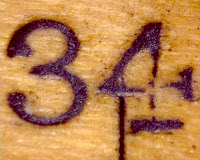 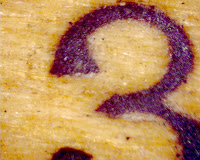 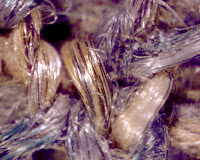 Posted by Unknown at (permalink) 4:08 PM No comments:

What Israel Is Fighting...

In an interesting article in the Jerusalem Post, I learned two things. First:

Hamas legislators marked the Christmas season by passing a Shari'a criminal code for the Palestinian Authority. Among other things, it legalizes crucifixion.

Hamas's endorsement of nailing enemies of Islam to crosses came at the same time it renewed its jihad. Here, too, Hamas wanted to make sure that Christians didn't feel neglected as its fighters launched missiles at Jewish day care centers and schools. So on Wednesday, Hamas lobbed a mortar shell at the Erez crossing point into Israel just as a group of Gazan Christians were standing on line waiting to travel to Bethlehem for Christmas.

Aren't those Hamas folks just the warmest and friendliest you've ever heard of?

Makes me think of a cheap way to dispose of a few of our excess nuclear weapons, creating a nice layer of multicolored glass in the process...

There is a great deal of ignorance in the West about what the likes of Ahmadinejad and his colleagues in Iran, Syria, Hizbullah and Hamas stand for. But this isn't their fault. They tell us every day that they seek the destruction of the Jews and the domination of the West in the name of Islam. And every day they take actions that they believe advance their goals.

The reason that the West remains ignorant of the views and goals of the likes of Hamas and Iran is not that the latter have hidden their views and goals. It is because the leading political leaders and foreign policy practitioners in the West refuse to listen to them and deny the significance of their actions.

As far as the West's leaders are concerned, Iran and its allies are unimportant. They are not actors, but objects. As far as the West's leading foreign policy "experts" and decision-makers are concerned, the only true actors on the global stage are Western powers. They alone have the power to shape reality and the world. Oddly enough, this dominant political philosophy, which is based on denying the existence of non-Western actors on the world stage, is referred to as political "realism."

The "realist" view was given clear expression this week by one of the "realist" clique's most prominent members. In an op-ed published Tuesday in Canada's Globe and Mail titled, "We must talk Iran out of the bomb," Richard Haass, the president of the Council on Foreign Relations, argued that given the dangers of a nuclear-armed Iran and the dangers of a US or Israeli strike against Iran's nuclear installations, the incoming Obama administration must hold direct negotiations with the mullahs to convince them to end their nuclear weapons program.

Moreover, Haass bizarrely contends that in negotiating with the mullahs, the Obama administration should offer Iran the same package of economic and political payoffs that the Bush administration and the EU have been offering, and Teheran has been rejecting, since 2003.

Even more disturbingly, Haass ignores the fact that Teheran made its greatest leaps forward in its uranium enrichment capabilities while it was engaged in these talks with the West.

Until I read this piece, I didn't know that these knuckleheads were still at it! The author is right – it is just plain bizarre that after repeated failures of discussion and diplomacy to accomplish anything at all, the proponents of more talking call for … more talk.

How does someone with such a miserable track record get to be “prominent” in a field, anyhow?

Posted by Unknown at (permalink) 8:51 AM No comments:

In the few days since the Israelis commenced their latest attacks on Hamas in the Gaza strip, the media has (as is totally usual and expected) been filled with heavily-spun, pro-Palestinian propaganda. To hear these “journalists” reports, you'd think that the Israelis were some sort of neo-Nazi organization bent on a twisted effort to wipe out Palestinians. I often wonder how these reporters would feel if those Hamas rockets were raining down on their homes and families. I wonder what sort of response they'd think was appropriate in that case?

I don't expect to personally unravel the craziness of Middle East politics. All by themselves, the Israelis have managed to create one of the screwiest democracies around. Reading about their internal politics is enough to make me feel thankful we have the Congress we do, Reid, Franks, Kennedy, Dodd, and Pelosi included...

But watching the Israeli Defense Forces (IDF) in action fills me with the same sense of awe and even pride that I get when watching our own forces in action. The IDF is doing a bang-up publicity job – on the Internet, since for the main part they can't get the world's press to pay any attention to them. Below is one example of their precision weapons in action, and here there are lots more.


The left-leaning media spins the Israeli attacks as reckless, with great civilian cost (and somehow they always neglect to compare this with Hamas, who is deliberately targeting Israeli civilians). In fact, the IDF has been remarkably successful at hitting exactly those targets they set out to hit, with very light civilian casualties – especially when you consider that Hamas deliberately locates their facilities in densely populated areas, knowing that Israel is loath to cause unnecessary civilian casualties (and once again, the left-leaning media consistently fails to point this out in their stories).

Posted by Unknown at (permalink) 5:13 AM No comments:

Pakistan's Moment in the Spotlight...

Over the past few days evidence has been accumulating that Pakistan's intelligence agency was directly involved in planning, preparing, and executing the recent terrorist attacks in Mumbai. Here's a nice summary by Bill Roggio:

Ajmal Amir Kasab, the only Mumbai terrorist captured by Indian police, admitted his 10-man team trained in Lashkar camps in Pakistan with the support of the Inter-Service Intelligence agency and launched their attack from the Pakistani port city of Karachi.

Meanwhile, the United States is pressuring Pakistan to turn over Zaki-ur Rehman Lakhvi, the military commander of the Lashkar-e-Taiba, Dawn reported. The US has provided Pakistan with communications intercepts between Lakhvi and the Mumbai terrorists. Lakhvi was also detained by Pakistani police during the sweeps against Lashkar offices and camps.

Immediately after the Mumbai attack, Indian police recovered a satellite phone with a number that was directly traced to Lakhvi in Muzaffarabad. Indian intelligence also intercepted conversations between Yusuf Muzammil, a senior Lashkar operative and the Mumbai attacks.

Pakistan has rejected the evidence of Lashkar’s complicity in Mumbai that was turned over by India, the US, and the UK. Pakistani officials said the information is "inadmissible in court," Dawn reported. "They said that since the confessions had been obtained under severe pressure by the Indians, this could not be admissible in judicial process. They have insisted that the information provided would not stand scrutiny in any court."

But Pakistan has been duplicitous in the investigation of Kasab's nationality, refusing to admit he is even a Pakistani despite overwhelming evidence to the contrary. Pakistan's position on Kasab, which US intelligence views as "incontrovertible," has frustrated US officials.

So it is obvious – and “incontrovertible” – that Pakistan's forces were directly involved. So far, Pakistan is dodging responsibility, doing exactly the opposite of what any rational country would do. They're protecting the people who did this. What's going on?

The only explanation I can think of is that Pakistan's government really does support the terrorism against India. It fits in with the overall ideology (based on radical Islam) of the recently elected Pakistani government. It is, in fact, an example of what many observers feared would happen when that government was elected.

This is a great example of the weakness of one of the left's standard positions: talking to the Pakistanis is failing, and will continue to fail. Some kind of well-enforced sanctions might coerce the Pakistanis into something resembling good behavior, but it won't change their beliefs and it will breed resentment (does anyone remember what happened in Germany after the Treaty of Versailles?). And don't forget that the Pakistanis have proven their ability to produce functioning nuclear weapons that they can deliver via missile...

Sometimes force is the only thing that actually solves this sort of dispute. Though those on the left would be loathe to admit this, in fact the application of force has successfully and lastingly resolved more international disputes than any other method ever tried. Most likely that's why wars are a recurring phenomenon. I'm not saying this is a good thing; I'm just observing a historical fact.

And suspecting that's where we're headed on this occasion...