Progress in Paradise...  We drove up to Home Depot to get a few things we needed, and on the way up our neighbor (Tim D.) called us.  It seems that a wandering driveway sealing guy was going house-to-house looking for customers.  Tim is a retired paving supervisor for a large highway construction company; he knows this stuff inside and out.  He'd used this guy in the past, and he'd done good work.  Tim also knew that we were looking to get our driveway sealed, so he called us to make sure it was ok to sic this guy on our driveway.  We said “Hell yes!” and while we were at Home Depot the fellow measured our driveway's area.  He'll be back tomorrow morning to actually do the job: pressure-wash our driveway, then apply the sealer (hot pure asphalt, with no fillers of any kind).  All for about 1/3 the price of a crappy sealing job (with no cleaning) in California.  Sweet!

The imminent driveway sealing derailed me for the day, though – I had to run around like mad to move everything that was sitting on the pavement.  That took a couple hours, and a lot of muscle work.  But 'tis done! 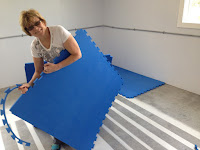 Debbie, meanwhile, started actually installing the foam for the floor of her (soon-to-be) indoor agility court.  As I write this, about half the foam is down, except for one skinny row near a wall.  For that row, we've got to cut each “tile” before we lay it down.  We do that with a hot knife: easy, but tedious and needing a steady hand.  Another couple days and we'll have all that installed – and then there will be a couple of very happy dogs turned loose on this beautiful blue agility practice court!
Posted by Unknown at (permalink) 4:30 PM No comments:

What do dogs do after a vigorous morning walk? 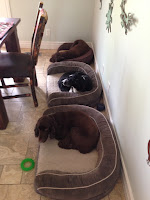 What do dogs do after a vigorous morning walk?  See for yourself:
Posted by Unknown at (permalink) 4:14 PM No comments:

Flowers in Paradise...  These are all from our yard.  The wild roses smell really good right now, all along the irrigation canal.  The horticultural varieties of columbine, and the poppy, are far happier this year than they were last year – I suspect because of the three weeks of rains we had this year.  That most likely means that if we were smart enough to irrigate them, we'd have them every year.  But we're not that smart :) 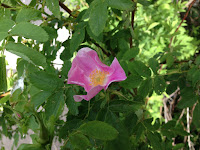 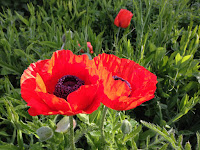 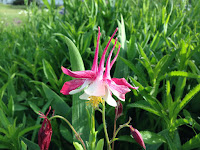 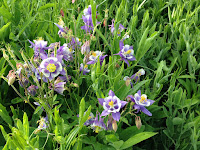 Posted by Unknown at (permalink) 8:01 AM No comments:

Robins in Paradise...  This is an update on the robin's nest we found in the half-dead tree in our front yard.  They've (of course) grown a lot in just a couple days.  There are still four babies... 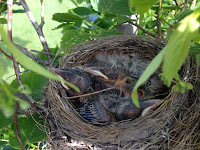 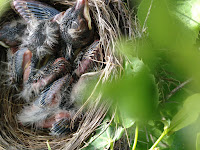 The rise of creamy yogurt...

The rise of creamy yogurt...  Well, here's another case where the U.S. is over 20 years behind Europe.  Click the first link to read the article.  The bottom line: U.S. yogurt manufacturers are starting to offer tastier yogurts made from whole milk (depending on where you live, that means 5% to 8% butterfat).

I first ran into these “full fat” yogurts on a trip to Estonia, while buying my lunch from a grocery store (a favorite mini-adventure of mine).  The labels on the yogurts were mostly not in English, but I could make out the butterfat analysis on most of them anyway.  Some of the German brands had butterfat contents as high as 18%!  I still remember the first time I had one of those – a little container of German strawberry yogurt.  It was to U.S. low-fat yogurt as Hagen-Daz is to ice milk.  I thought my brains were going to fall out.

We still have a ways to go to hit that European yogurt yummy goodness.  But any step along the way is bound to be better than what we used to have.  I can hardly wait to find this in our local stores!
Posted by Unknown at (permalink) 6:34 AM No comments: Hyperion...  As seen by the Cassini robotic spacecraft, as it approaches the end of its long and incredibly successful mission to explore Saturn and its moons.  Via APOD, of course...
Posted by Unknown at (permalink) 6:09 AM No comments:

Quote of the day...  This is from Starri Hedges, a Director at the Gaia Democratic School (a private school whose logo appears at right) in Minneapolis, Minnesota:


“It was certainly the first time we have taken that kind of field trip and it will probably be our last, which I feel bad [about] because the kids had so much fun.”

The field trip she's referring to was for a dozen students of middle- and high-school age for a sex education class – to the Smitten Kitten, a “progressive sex toy” store.

Sex education when I went to school consisted of a single session, perhaps 30 minutes long.  The class was boys-only, there was a short film that taught me exactly nothing I didn't already know, and then the teacher (a gym teacher!) mumbled something about talking with our dads and seeing the school nurse “if we had a problem”.  That was it.  No field trips anywhere.  I'm not sure if sex toy stores existed back in the '60s.  I don't remember them.

What the hell is a progressive sex toy, anyway?  Are they gender-neutral?  Are they free for low income folks?  Are they engraved with the collected wisdom of progressive thought-leaders (plenty of room on even the smallest sex toy for that!)?  Or maybe it's just that the store makes a contribution to the Democrats when you buy an anatomically-correct “personal massage” device?
Posted by Unknown at (permalink) 5:51 AM No comments:

I'm not a death penalty advocate...

I'm not a death penalty advocate...  But there are stories that make me less certain of my position...
Posted by Unknown at (permalink) 5:13 AM No comments:

3.9%?  According to this report (click first link) from the Wall Street Journal, that's the percentage of people who test positive for drugs on corporate drugs testing programs.  That percentage has been declining for almost 20 years, but this year it went up.

Something to remember: these are the positives from people who knew they would be tested (though they might not know exactly when).  You can bet that the actual percentage of drugs users is much higher, because basically everyone who cares about keeping their job would have stayed clean for the test.

Every time I see a test like this, I have to laugh at the impression it leaves.  More recently, I also remember a casual conversation I had with an executive at a company I worked for (the company and the executive shall remain unnamed).  I asked why the company didn't participate in drugs testing.  He said “Because if we did, you’d be the only programmer here!”  Hah!  I don't think that's actually true – but I'd bet you it was a more accurate assessment than that 3.9% number.  Just from incident observations and conversations, I'd guess the actual percentage at the last few companies I worked for was more like 50% to 60% (just counting illegal drugs), and I wouldn't be a bit surprised to find the number was actually 10% to 15% higher.

Since I worked with (primarily) engineers and executives, we're talking about a group of above average intelligence and function – which is enough to make anyone question the alleged brain and motivation destroying properties of casual drug use.

3.9% of American workers use illegal drugs?  Don't you believe it!  That number is far too low.  It's still not as high as the (perfectly legal) use of alcohol, though – despite alcohol use having a much worse impact on workers...
Posted by Unknown at (permalink) 5:12 AM No comments: