TJIC commenting on the low quantities and late availability of the H1N1 (swine flu) vaccine:


Man, it’s a good thing that the flu vaccine isn’t being left in the hands of the free market – we might have the same horrible production and distribution bottlenecks that we run into with Coke, pizza, books, and pajamas – you can’t find those things anywhere.


And, hey, on the bright side, socialized medicine is coming!

This past Sunday, Debbie and I took a little four-wheeling trip to a nearby place that we've never been before: to the top of Otay Mountain.  This was a trip more interesting than it was pleasant, as we traveled through areas mainly comprised of low, dry chaparral (not that attractive in the first place) that burned just two years ago.  The views to the south and southeast on the way up were very pretty – the morning mists in the low valleys in the southern U.S. and northern Mexico.

On the other hand, both the geology and the plant life were interesting and different than our home, which is only about 10 miles away in a straight line.  We saw a few familiar things (particularly some oaks), but a great many of the plants were unknown to us.  A large shrub or small tree was particularly common, but appears to be completely wiped out after the fire – we saw skeletons of these plants, with the remains of very odd seed structures (at least, we think that's what they were) all over the place.  When they were present, those must have made this drive a much more attractive one. 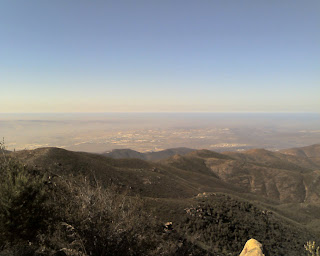 The view from the top (at about 2,500 feet altitude) was the best part of the journey.  To the west was an unobstructed view of the ocean and coastal plains, as Otay is the westernmost peak of the coast mountain range at this latitude.  To the east was the bulk of the coastal mountain range, including Lyons Peak, Lawson Peak, and Gaskill Peak – the heights ranged around our home.  We've never seen them from this angle before, and it took a while to get our bearings.

On the way home we stopped at a locally famous place to have lunch: the Dulzura Cafe.  I've only been here once before, some 30 years ago, and all I could remember was that I had a good hamburger there.  Debbie ordered machaca and eggs; I ordered a hamburger and fries.  Most of the meal was mediocre at best, but the hamburger was very good.  The one-woman service crew was completely overwhelmed by the lunch crowd, so the service was naturally spotty.  We greatly enjoyed the collection of antiques scattered all over the restaurant – particularly the collection of a couple hundred license plates tacked to the walls, and of old-fashioned egg beaters arrayed overhead.  One item made us think of our German friend Franz M. (who has helped me a great deal with my slide rule collection): an old, very beat-up Remington typewriter, of exactly the era that Franz collects.

Some more photos from the trip. The third photo is of one of the many radio and television transmission facilities that are on all the peaks of Otay Mountain. The last two are mostly of interest to locals: they show the western flanks of the coastal range, with Cuyamaca Peak prominent in the background: 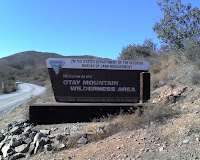 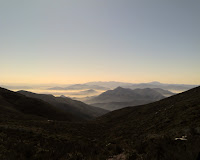 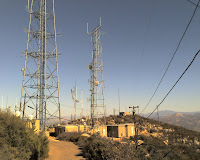 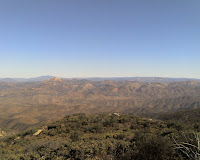 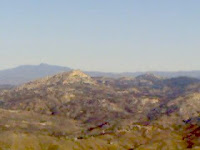 Posted by Unknown at (permalink) 4:24 AM No comments: