Listening to Obama and the lapdog lamestream media's reports, you'd think that the U.S. was burning up with record high temperatures, burning down from wildfires, being blown apart by tornadoes and hurricanes, and so on.

Unless you are a very strange person, you will never before have heard a ukelele that sounded like this:

A judge in Tennessee has told the parents of a 7 month old baby boy that they must change its first name to “Martin” instead of the name the parents wanted.

My first reaction upon reading that was to wonder how it could be possible for a judge in the U.S. to even have that power.  It doesn't seem to me that a judge should be able to do that – if a parent wants to assign some particular name to their child, why should a judge be able to overrule them?

Then I read the name the parents had chosen: “Messiah”.  Ah, ha!  They must have offended a Christian judge, I thought – and the article confirms that.  This seems like particularly egregious overreach on the part of the judge, imposing her Christian sensibilities on the parents, who may or may not be Christian themselves.  My guess is that if the parent's fight the judge's order, they will prevail.

But what to do with a judge that exhibits such blatantly inappropriate prejudice and partiality?  Get her out of there!  She doesn't belong in a position with such responsibility to be impartial with respect to faith...
Posted by Unknown at (permalink) 5:57 AM No comments:

The IPCC and it's gang of warmists (Hansen, Mann, etc.) love to tell us that the science is settled with respect to global warming.  Their models, upon which virtually everything they assert rests, are chock full of questionable assumptions and faulty data, but the warmists nonetheless assure us that the models tell the whole truth, the only truth, and nothing but the truth.  Amongst these “truths” is that variations in the brightness of the sun have almost no effect on global average temperatures – so little, in fact, that the majority of the models used by the IPCC reports don't even bother to include it.

This morning I read a report by several climatologists that claims they have discovered the cause of the (roughly) 100,000 year Ice Age cycle.  This cycle has long been known, but was unexplained (at least, in any rigorous and plausible way).  These scientists claim to have solved the riddle (by producing a computer model that can reproduce Ice Ages).  The cause, they say, is a cyclical variation in “insolation” (a five dollar word meaning sunlight striking the Earth).

A couple of times a week I check out the “Recent Seismic Activity” link at right, which shows the latest data collected by the seismometer installed in my home office (about four feet from where I'm typing this).  Usually there will be one or two entries posted each week.  This time, there were four entries just from the last two days – and they were a large enough magnitude that I knew they must be from relatively close earthquakes.

The map below shows the location of the cluster of small earthquakes (largest one is magnitude 3.8), located about 30 miles ENE of our home.  Not close enough to be worrisome, but certainly closer than most earthquakes the seismometer sees!  The cluster is almost due east of Mt. Laguna, close to S2 near the mouth of Canebrake Canyon.  This is an area I know quite well, as I walk there looking for Desert Lilies many winters. 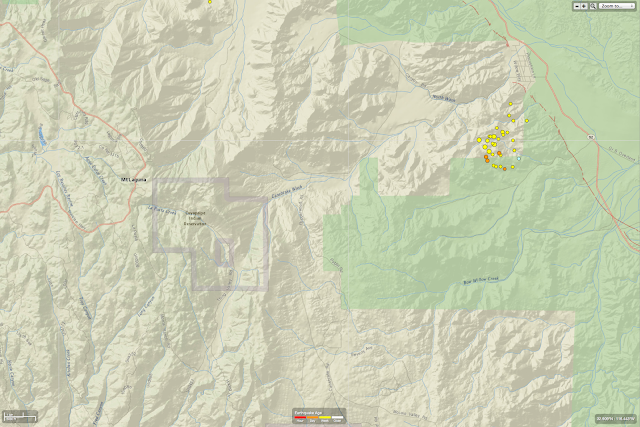 I got up extra early this morning (about 3 am) so I could go out and watch the Perseid meteors, which peaked tonight.  They put on quite a show!  In 20 minutes I saw 27 meteors.  Most of them were the typical streak of light about as bright as a star, but four of them were much bigger and brighter than any star.  One of these came more-or-less straight toward me, making only a short streak just to the north of the Pleiades.  Another of them went straight overhead, moving toward the southwest – and making a visible smoke trail that persisted for a minute or so.

Awesome!
Posted by Unknown at (permalink) 5:13 AM No comments: