Some interesting observations about the web sites used by Al Qaeda and their supporters:

Al Qaeda web sites are making a lot of noise about "why we lost in Iraq." Western intelligence agencies are fascinated by the statistics being posted in several of these Arab language sites. Not the kind of stuff you read about in the Western media. According to al Qaeda, their collapse in Iraq was steep and catastrophic. According to their stats, in late 2006, al Qaeda was responsible for 60 percent of the terrorist attacks, and nearly all the ones that involved killing a lot of civilians. The rest of the violence was carried out by Iraqi Sunni Arab groups, who were trying in vain to scare the Americans out of the country.

Today, al Qaeda has been shattered, with most of its leadership and foot soldiers dead, captured or moved from Iraq. As a result, al Qaeda attacks have declined more than 90 percent. Worse, most of their Iraqi Sunni Arab allies have turned on them, or simply quit. This "betrayal" is handled carefully on the terrorist web sites, for it is seen as both shameful, and perhaps recoverable.

This is a good example of the (vastly) more complete information that is available on alternative news sites and blogs. You just don't see this sort of thing reported in the lamestream media. I guess it's just not “sensational” enough to make the cut – though certainly any indication that Al Qaeda is suffering sure sounds pretty sensational to me!

Posted by Unknown at (permalink) 4:54 AM No comments:

The polar bears are doing just fine, thank you very much.

So says Alaska Gov. Sarah Palin, who announced last week that her state would sue to block Washington from listing the animals as "threatened" under the Endangered Species Act.

And it's a good thing, too - because the new bear-population protections mask what may be the most serious threat to American economic might in decades.

The polar bear, you see, marks the first species on the "threatened" list whose supposed predicament is linked directly to global warming.

The current Alaskan polar-bear population may be near an all-time high.

But Interior Department computer models - such as they are - project widespread melting of the polar ice the bears need to hunt.

And that's a big problem, given the near-limitless powers embedded in the Endangered Species Act.

Go read the whole thing to understand how your elected representatives are conspiring to (a) keep your gasoline prices high, and (b) waste more of your tax dollars than you thought possible.

Meanwhile, my thoughts are drifting in this direction (as they so often do): 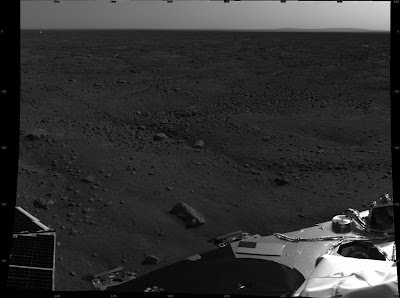 Here's a fine mosaic put together by the Phoenix team from many individual images. Eventually they'll have the entire site mapped with full-color, stereographic photos. The technology used for surface imagery keeps getting better and better – this mosaic is, for all practical purposes, competely free of seams and other artifacts that usually appear. They've got the techniques and technology pretty much nailed...

This photo shows the scene from one side of the lander all the way to the horizon. Notable things immediately visible include the hummock-and-trough terrain extending right up to the lander (this is good, because the scientists want to dig both in a hummock and in a trough), the low hills on the horizon (very useful for figuring out exactly where the lander is), the wide expanse of similar terrain (good because it tells us that the lander didn't happen to squat on an anomalous piece of Mars), and, just for fun, a white artifact in the upper left corner of the scene. 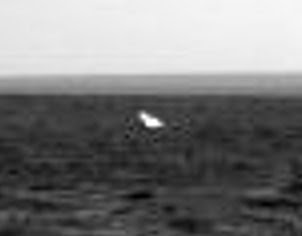 That artifact appears at right, blown up just as big as I can make it. It's very tempting to conclude that it's something man-made, as it doesn't look like anything else in the surrounds.

There are several candidates for such a man-made object: the “backshell”, the heat shield, and the parachute.

The backshell is the shroud that protected Phoenix as it cruised from Earth to Mars; it is most likely still attached to the parachute. As Phoenix descended through the Martian atmosphere, first it decelerated through atmospheric drag, protected by the heat shield. Once it had slowed down sufficiently, the parachute deployed to slow it still further. While under canopy, the heat shield was discarded. At about 1,000 meters of altitude, the lander separated from the backshell (which was still attached to the canopy), dropping away, then using rocket motors to descend slowly to the surface.

Given this sequence, the heat shield is most likely several kilometers (or more) away from the lander, but the backshell and parachute could be within a few hundred meters – just where this artifact appears to be.

Or it could be a Martian, playing a joke on us by rolling up a nice big snowball.

My bet is on the backshell/parachute...
Posted by Unknown at (permalink) 4:16 AM No comments: