Paradise ponders: an eventful 24 hours edition...  Well, I didn't get far on my plans yesterday to start the cattery window frames.  Not far at all.  Events conspired...

First, I'm finding myself swamped with paperwork and phone calls of various kinds.  All just routine stuff, but I've been neglecting it and now there are starting to be consequences. :)  So I started catching up with all that, both yesterday and today.

Right in the middle of that paperwork, I got an unexpected text message from our mason, Randy Bingham.  He asked if I was home.  I replied that I was.  He said “We have your cap!”, meaning the rock slab that would form the roof of our little filling station.  I asked if he wanted to deliver it, and he said “We’re here right now!”  So I ran out to greet him and his partner Jeffrey.  The big chunk of rock weighs about 1,100 pounds, so they used their handy-dandy loader to put it in place.  Jeffrey's running the loader, and that's Randy with his back to me.  It's going to be a few weeks before they have time to put the rock veneer on the sides, but now we've got a roof! 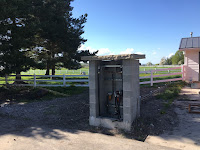 The filling station presented me with a new challenge.  I've discovered that the height of the tanks doesn't provide enough pressure to operate the nice auto-closing nozzles I bought.  So now I've ordered a couple of fuel pumps that we'll mount in the block structure – which means the plumbers will have to re-do part of the plumbing.  It's always something...

While I was out with Randy and Jeffrey, I noticed some workers alongside the irrigation canal that runs along the east side of our property.  They were cleaning up the big piles of brush that had been left there by the canal cleaners a month or so ago.  I've been after them for three years now to clean up the mess they made, and finally they did it.  The workers did an especially nice job, too – right down to cleaning up the twigs with a leaf rake.  I've been planning to get a burn permit to burn those piles myself, as I'd given up on them cleaning it up.  Good thing I procrastinated: they did even better, picking it all up instead of burning it.  Nice!

Then we went to lunch at Los Primos with our friend Michelle H.  A most pleasant (and delicious!) lunch that was.  We tend to go on Tuesdays because that's the day they have our favorite menu item: vegetable beef soup.  Yesterday they had just one bowl left, which Michelle and I decided Debbie should have.  Our waiter saw our disappointment, and he told us the soup often runs out early in the day.  But ... he also said that if we called in the morning and told him we were coming in the afternoon (normally our big meal for the day), he'd reserve as many portions as we'd like.  Woo hoo!

I had a nice long (literally at the fence) conversation with my friend and neighbor Tim D.  He's recovering from back surgery, and doing very well, but his physical activity is strictly limited and he really hates that.  It's hard for him to stick to the guidelines his doctor gave him. 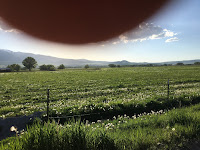 Debbie and I took a drive in the afternoon to see if we could spot a local bird that we really like: the yellow-headed blackbird.  We struck gold, and got several nice, long viewings of males – including one doing the full-on mating call and display behavior.  Nice!  We also saw large numbers of Canadian geese and white-faced ibis with their beautiful iridescent breeding plumage.  The photo at right (you'll have to click to embiggen it) shows one scene full of geese and ibis.  My finger is there to shield the lens from direct sunlight, as I was shooting straight into the evening sun.  We also saw a couple of other interesting things: a herd of buffalo, apparently being raised for the meat, and a young lady practicing steer roping.  Just driving through the bottoms of the Little Bear River is beautiful right now, with green everywhere and lots of flowers (especially around houses).

This morning we got an especially good piece of news for Debbie's recovery.  She just finished the third trial run (month-long) using a drug called Forteo that helps build back new bone for people with osteoporosis.   Her endocrinologist recommended it as the best drug for her situation.  After the two previous trial runs, she had to stop using it because her blood calcium levels got too high, which increases the risk of a heart attack.  Not good!  But after this trial (which we'd all agreed would be her last), her blood calcium levels were normal!  Yay!  This is mostly because she stopped taking calcium supplements and also stopped getting too much calcium in her diet.  She's now carefully monitoring her calcium intake to keep it within normal range, neither too high nor too low.  And apparently that was all it took to let her respond normally to Forteo.  So now she's going on it for the next two years, to get her bones built back up faster and stronger.  We were all primed for another round of bad news on this, so it was one of those very pleasant surprises for us to hear the good news.  Debbie is over-the-moon, and demanded a celebratory dinner tonight.  So we're headed to Le Nonne's at 5:30. :)
Posted by Unknown at (permalink) 11:52 AM No comments: