I guess we're just counter-cultural and/or primitive out here in the sticks. Any miscreant showing his face at our home will be met with warnings, curses, and supersonic lead. But mostly supersonic lead.

Posted by Unknown at (permalink) 3:55 PM No comments:

From Sign On San Diego, an article that sounds a bit pessimistic about the prospects for the Jamul Indian Casino. From the article:

Federal recognition is required for tribes to receive federal aid and participate in government programs. It's also necessary to conduct gaming.

For a tribe like Jamul, the Supreme Court's decision “raises questions about the status of the land,” Indian law expert Kathryn Rand said.

“Those questions might ultimately be decided in favor of the tribe, but . . . they are dependent upon the particular circumstances surrounding the tribe's recognition and the land taken into trust,” said Rand, a law professor who co-founded the Institute for the Study of Tribal Gaming Law and Policy at the University of North Dakota.

Rand said she would expect state and local officials – who have battled Jamul's plans to build a casino – to raise those issues.

Good. Jamul with a casino would be forever changed for the worse...

Posted by Unknown at (permalink) 3:54 AM No comments: 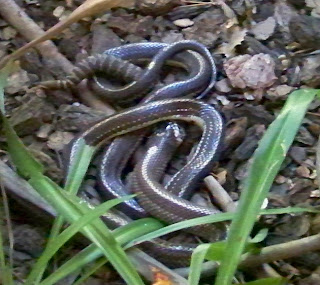 Reader Linda I. sent in this photo of a 3 foot long King snake that's just about finished with his lunch: a smaller rattlesnake. The only part of the rattlesnake that's still visible is the rattles, and I'm sure those didn't last long!

Many people have such a fear of rattlesnakes that they tend to brand all snakes as vermin. The reality is that we have more good snakes (King snakes and gopher snakes, especially) than bad snakes (if you subscribe to the notion that rattlesnakes are bad). Rattlesnakes are especially good at controlling the populations of small rodents, so they're not entirely evil themselves – but if your pets or small children have the run of your yard, you might find it hard to think of rattlesnakes as anything other than a mortal enemy...

Posted by Unknown at (permalink) 3:35 AM No comments:

An anonymous reader sends this word:

I just want to say about the whole Johnny Dallo situation that on your blog it says he got a year and he did but, I just want to say that at the end of it all--he didn't even serve that he barely served 2 1/2 months for killing Jodi and now he's getting married. Well just to let you know the 1 year came down to that. What ever sentence anyone gets it doesn't mean that's the time that there really going to serve it gets cut down.

Assuming this is accurate (I have no way to verify it), it gives the appearance of “justice” being purchased.

If you don't remember the Jonny Dallo case, read my previous posts on the matter. The short version: Jonny Dallo, a repeat traffic offender, was travelling down Campo Road (State 94) at around 100 MPH around 4 am on June 28, 2006. He rear-ended Jodi Burnett's pickup while she was in the left-turn lane, killing her. Jonny Dallo's father is a wealthy local businessman. Jonny was charged, but the case was plea-bargained down to a guilty plea for involuntary manslaughter and he was sentenced to one year in jail (a travesty all by itself).

Somehow I don't believe that I'd end up so lightly punished, were I to find myself in Jonny Dallo's position...