Intel 4004...  This was the very first microprocessor, and it has a special place in my memory.  Today is the 44th anniversary of its announcement, on November 15, 1971.  It wasn't immediately available; in fact, it wasn't available to ordinary individuals until about 3 years later.  I don't remember the exact date, but sometime in 1974 – about 41 years ago – I bought one of these magnificent parts.  Mine looked just like the photo above, with a ceramic case and gold-plated (literally!) pins and lid.  It was an expensive part when sold at retail – over $100, as I recall.  At the same time, I bought a kit from some long-gone company.  It was a bag of parts and a schematic; the entire kit had to be wire-wrapped.  The schematic was the key bit.  I had never designed anything like a microprocessor before, and having a schematic was mighty comforting.  There was also a PROM (programmable read-only memory) with a small test program.  I put the thing together in a single evening, staying up until quite late to do it.  The “input”  was a set of four toggle switches and a momentary push button; the “output” was four LEDs.  I fired it up, and it worked – first try!  Then I spent weeks understanding what I had built, and what it could do. 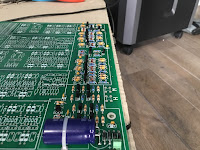 Paradise ponders...  Just finished assembling the prescaler on my clock kit (photo at right).  It doesn't work :)  That's not surprising, given that I just loaded and soldered a hundred or so parts.  I troubleshot it for a few minutes, and discovered that an “or” gate has one input permanently stuck low.  My next job will be to figure out why that should be.  It's fun to be doing electronics again, and it's even fun for me to troubleshoot.  It's been a good many years since I've troubleshot digital logic at the component level – takes me back to my days in the Navy...
Posted by Unknown at (permalink) 8:35 AM No comments:

Edumacayshun...  Oh, my.  This feels distressingly on point...
Posted by Unknown at (permalink) 3:56 AM No comments:

Our doctor in San Diego retired earlier than he'd planned to...

Our doctor in San Diego retired earlier than he'd planned to ... and ObamaCare was a contributing factor.  Anecdotally we've heard of several other doctors doing the same thing, including one who changed careers from surgery to truck driving.  They are not alone...
Posted by Unknown at (permalink) 3:44 AM No comments:

Our government's ineffectiveness isn't just a recent phenomenon...  One of the best examples I can think of to illustrate this is the fact that homeopathic “medicines” are still legally advertised and sold in the U.S.  The notions underlying these quack remedies has been thoroughly debunked.  By the 1940s, scientists and doctors knew for certain that at the very best homeopathic remedies were placebos.  There is no disease or condition that any of them can help.  We know this – and yet, the makers of homeopathic “remedies” are allowed to advertise them as effective.

Why is this?  It's a combination of corruption (the homeopathic industry dispenses a lot of money in their lobbying) and political expediency (no politician wants to tell a mom that she can't get “medicine” for her baby – even if that “medicine” is utterly worthless).

If our dysfunctional national government can't even outlaw homeopathic “remedies”, how are they going to tackle something that's actually hard, like, say, immigration?
Posted by Unknown at (permalink) 3:01 AM No comments: 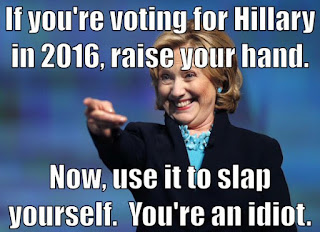 Do it now!  Friend, reader, and former colleague Simon M. passes along some excellent advice.  However, I think his advice is just a wee bit too specific.  You could insert the name and photo of any of the 2016 presidential candidates and it would be just as useful...


Posted by Unknown at (permalink) 2:38 AM No comments:

Like a dead bug on a windshield...  A delightful essay on the strangeness of English.  A teaser:


Old English had the crazy genders we would expect of a good European language – but the Scandies didn’t bother with those, and so now we have none. Chalk up one of English’s weirdnesses. What’s more, the Vikings mastered only that one shred of a once-lovely conjugation system: hence the lonely third‑person singular –s, hanging on like a dead bug on a windshield. Here and in other ways, they smoothed out the hard stuff.

Do go read the whole thing!
Posted by Unknown at (permalink) 2:34 AM No comments:

Inquiring minds want to know...  Well, at least one inquiring mind – and even that is assuming that you believe the readers of this blog have a mind in the first place :)  A reader (who shall remain unnamed, but he knows who he is) wrote to ask:


“Where’s all the political commentary?  Your blog used to be where I went to catch up on political events!”

I'm teetering on the edge of completely giving up on our political leadership, especially at the national level.  Watching the sausage factory known as our Congress doesn't exactly inspire one, does it?  And the closer I watch the process and participants, the more I realize just how corrupt and ineffective Congress has become.  It's overwhelmingly corrupt and ineffective.  It's gotten to the point where the most reliable way to predict an outcome from Congress is to imagine what the most corrupt outcome would be.  To fix it would require something dramatic and, I'm afraid, unlikely.  Something like a wholesale revolution at the ballot box, exchanging the current bunch of bozos for a new group of untainted Senators and Representatives.  Or a revolution that threw them out by force.  Or some horrible event that unified the country's leadership behind a non-political cause (but even 9/11 wasn't enough for that, was it?).  Will any of that happen in my lifetime?  Most likely not.

Then there's the joke of a campaign for President in 2016.  It's hard to even imagine a more unserious collection of uninspiring, ill-prepared ego-maniacs.  Not one of these people, on either side, look to me like effective leaders.  I don't really expect to be presented with a candidate who agrees with all of my policy views, but ... every single one of these candidates has huge swathes of policy views (whether stated or inferred) that I find completely unacceptable.  There's nobody left in the race that I'd be comfortable voting for.  If some miracle occurs and the GOP successfully drafts Mitt Romney, he'll get my desperation vote – at least he looks like an effective leader.  But that doesn't seem very probable; instead, the choice seems likely to be The Hillary versus The Donald, Dr. Carson, or (maybe) Cruz or Rubio.  And my response to any of those is “What’s the point in voting?”

Hence my teetering on the precipice.

It's not that I no longer care.  It's that I don't think any substantive change in a positive direction is likely.  That's a negative and discouraging view, and I'm by nature an optimistic fellow.  I don't get to such a negative place easily.  But I'm there...

There won't be zero political commentary here.  Occasionally I may be moved to comment despite my overall despair.  More often, you'll find my virtual comments in my Twitter stream, in the form of re-tweets.  As the 2016 election approaches, I'm sure I'll be drawn in some more – with the same sort of morbid fascination some people (not me!) have for automobile accidents and suicidal jumpers...
Posted by Unknown at (permalink) 2:28 AM 1 comment: