Paradise ponders...  Now that Miki is back and things have calmed down just a bit, it's time for me to do a little catch-up! 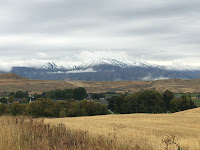 About a week ago we had quite a rainstorm – dumped four and a half inches on us.  The mountains got a nice (and quite early) coating of snow, too, as you can see at right.  I took this while walking the puppies – that might be more challenging that you'd imagine! :) 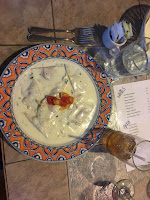 On this past Saturday evening, friends of ours (Michelle and Jimmy B., and Terry and Tio V.) rolled in for a short visit.  Michelle and Terry are sisters; the four of them were on the last leg of a driving trip that took them across the country and then back to home near San Diego.  On Saturday night we took them to Le Nonne's for dinner.  My entree – crab ravioli – is at left.  Wonderful stuff, that was.  This time we got a perfectly normal waitress instead of the pretentious man-child we had the last time we were here.  That made the meal much more enjoyable for me.  On Sunday we all made the (now ritual) trip down to the Red Iguana, partly because we found out that Tio (who is Hispanic) absolutely loves mole sauce – and Red Iguana is famous for their moles.  Tio looked like he'd died and gone to heaven as he was eating.  It was a lot of fun for us to watch him enjoy it so much.  Everybody else enjoyed it, too!  From these two meals there were enough leftovers that Debbie and I made a meal of them on Monday.  Oh, boy, those were good! 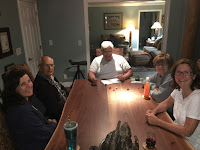 Much of the time we spent with these folks we were talking.  There might have been some alcohol now and then. :)  And past my bedtime, there were games – dice and cards that the others stayed up late to play.  In the photo at right, clockwise from the lower left, are Michelle, Jimmy, Tio, my lovely bride Debbie, and Terry.  They're all sitting at our dining room table, which actually got used during their visit – first time! 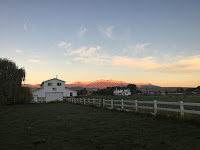 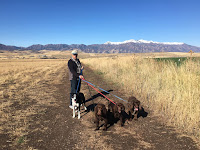 Sunday morning there was a beautiful sunrise.  I love the pink/orange light that's first visible on the Wellsville Mountains to our west (leftmost photo).  Later, Jimmy and I took all four dogs for a walk together, something we've never done before.  The most I can handle by myself is two, so I generally walk either Miki and Race, or Cabo and Mako.  All four together make quite a group!  Jimmy didn't have much trouble holding them all, though if they set their mind to it, I'm sure they could have dragged him into the next county!  Left-to-right, the dogs are: Race, Mako, Cabo, and Miki.  Hmmm ... all four-letter dogs!

If you've been reading my blog regularly, you know about Miki going walkabout, and his subsequent return.  I told the story of how our neighbor's kid did a really good job of letting us know about his spotting of Miki.  Yesterday we stopped by his house to say thank you personally, and to give him the reward we'd intended to post for Miki's return (assuming his folks were ok with that).  He wasn't home, so I'm going back to do that this afternoon.  In the morning I took Miki to the groomer, where one of the people there (a young lady named Talisa) did a bang-up job of getting all the burrs off of him, then giving him a credible haircut so he didn't look ridiculous despite his short 'do.  She talked to him constantly to keep him calm, and worked carefully to avoid inflicting any more misery than he was already feeling.  Miki was still looking frightened, so I stayed with him while she worked, and I think that actually helped.  Last night we let Miki sleep in our bed (something he loves more than most dogs love life), and he thanked us in his inimitable canine fashion: he positioned himself with his head by our feet, butt aimed at us, and he farted all night.  We really didn't care. :)  I slept like the proverbial log, thanks to the relief of having him back with us, safe and sound.

This morning I took a lovely walk with Miki and Race, intended really to be a treat for Miki.  He got tired after just a half mile or so, so we turned around and came home.  The entire walk I was watching dramatic skies and lighting.  There were rainstorms to our west, and the early morning sun made great rainbows in them.  To our east, the sun was rising over the Wasatch Mountains through patchy cloud cover, and that made for spot lighting all round.  When an area was in shadow, it was quite dark, as the sun was just barely over the horizon.  Where we were standing was actually still in the shade of the Wasatch Mountains.  Some photos, all inadequate: 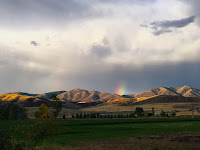 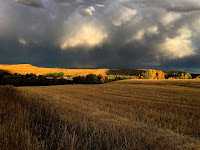 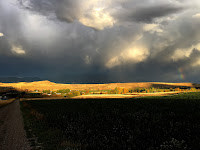 Posted by Unknown at (permalink) 12:23 PM No comments: