Via my mom, who finds this history eminently believable:


During the recent royal wedding, the millions around the world saw that Prince William chose to wear a uniform that included the famous British "red coat." Many people have asked, "Why did the British wear red coats in battle?"

Well, a long time ago, when Britain and France were at war, during one battle, the French captured a British Colonel. They took him to their head-quarters, where the French General began to question him. Finally, as an afterthought, the French General asked, "Why do you British officers all wear red coats? Don't you know the red material makes you easier targets for us to shoot at?"  In his casual, matter-of-fact, way, the officer informed the General that the reason British officers wear red coats is so that if they are shot, the blood won't show, and the men they are leading won't panic.

And that is why, from that day forward, all French Army officers have worn brown trousers.

Since the recent announcement that an experiment at CERN is measuring the speed of neutrinos as faster than the speed of light, there has been no end of commentary.  But of all that I've read, I think Charles Krauthammer (generally known for his political commentary) has said it best.  His conclusion:


But if quantum mechanics was a challenge to human sensibilities, this pesky Swiss-Italian neutrino is their undoing. It means that Einstein’s relativity — a theory of uncommon beauty upon which all of physics has been built for 100 years — is wrong. Not just inaccurate. Not just flawed. But deeply, fundamentally, indescribably wrong.

It means that the “standard model” of subatomic particles that stands at the center of all modern physics is wrong.

Nor does it stop there. This will not just overthrow physics. Astronomy and cosmology measure time and distance in the universe on the assumption of light speed as the cosmic limit. Their foundations will shake as well.

It cannot be. Yet, this is not a couple of guys in a garage peddling cold fusion. This is no crank wheeling a perpetual motion machine into the patent office. These are the best researchers in the world using the finest measuring instruments, having subjected their data to the highest levels of scrutiny, including six months of cross-checking by 160 scientists from 11 countries.

But there must be some error. Because otherwise everything changes. We shall need a new physics. A new cosmology. New understandings of past and future, of cause and effect. Then shortly and surely, new theologies.
Why? Because we can’t have neutrinos getting kicked out of taverns they have not yet entered.

Remember This When You Vote...

On the evidence of past elections, one must assume that the average American voter's memory is approximately as capacious as that of an earthworm.  Therefore I feel quite safe in assuming that by the November 2012 elections, the average voter will have completely forgotten the promises and projections of then-candidate Obama with respect to unemployment.

So I present the chart at right (courtesy of Innocent Bystanders) to refresh everyone's memory.  According to projections by Obama and his trusty sidekick Tim, at this point we should be at 7.2% unemployment if we hadn't implemented the Obama stimulus program at all.  And with the stimulus program, we should be at a much more comfortable 6.3% unemployment (all of these unemployment numbers are the bogus, “cooked” numbers that leave out the “discouraged” (but still very much unemployed) workers.

So what's the lesson here? That Obama and his cronies are lying sacks of shit?

No, I don't think so.  I think they really believed those projections, and that the real lesson (as if it was actually needed!) is that they have no idea what they're doing.

So please, dear American voters...remember this when you vote next November...
Posted by Unknown at (permalink) 7:00 AM No comments: 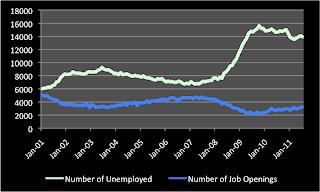 A few months ago, my company brought in a motivational speaker, who did a fine job of firing us all up.  A refrain heard throughout his talk (and explained in it), was “Glad to be here!”

Anyone with a job should be glad to be there.  Look at the graph at right (click to enlarge) and consider what it implies to those unfortunate enough to be unemployed (currently 1 in 6 Americans of working age).

This graph was part of a fine article by Megan McArdle on a different question: whether the demonstrations on Wall Street could morph into an actual platform for the Democrats...
Posted by Unknown at (permalink) 6:43 AM No comments:

An excellent article about the dangers of relying on computer models to predict future events.  They had me at the introductory quote, one of my old favorites:

Last American Who Knew What the F*$! He Was Doing...

Via reader Simon M., the Onion (ground zero for satire on the web) notes the death of Steve Jobs in their usual irreverant fashion.  Only I'm none too sure that that headline is satire...
Posted by Unknown at (permalink) 6:32 AM No comments: