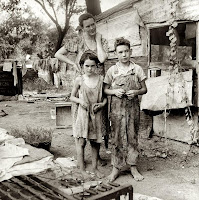 The press of late has taken to calling our current recession “The Great Depression”.  Accepting this characterization requires either a breathtaking ignorance of history or a complete disregard for the objective truth.  Either way, not a vote of confidence in our lamestream media.

The photo at right is one of many iconic photos of impoverished Americans in the 1930s.  My own father remembers those years – just 70 years ago, a mere blink ago in the historical record.  In that Great Depression, millions of Americans were under existential threat – lacking such basics as food and shelter.  The recent history of the area where I live (Southern California) was greatly affected by the mass migration of the “Okies” from the dustbowl of Texas and Oklahoma.

Interesting how the much-disparaged Justice Thomas is the one to successfully ressurect the 14th Amendment's “Priveleges and Immunities” clause...
Posted by Unknown at (permalink) 4:18 AM No comments: