Storm total ... is 2.85 inches, as of 7 pm this evening.  We still have more rain in the forecast, too – tomorrow afternoon through Thursday.  Our fields are saturated, and the baby alfalfa plants are practically leaping for joy, while the rye and orchard grass is growing almost visibly.  What a difference from the desert of California!
Posted by Unknown at (permalink) 6:10 PM No comments:

Raindrops kept falling on our heads...

Raindrops kept falling on our heads ... nearly all day long.  It stopped around 2 pm, but now (at 5 pm) it looks like it's going to start again.  I didn't have a chance to work outside today at all.  Maybe tomorrow morning.

Debbie and I took a drive up to Hardware Ranch today, and a few miles beyond.   We saw a male Lazuli Bunting, a gorgeous male meadowlark, and – best of all – a pair of Sandhill Cranes with two chicks, much like the photo at right (which isn't mine).  We sat and watched the four of them for quite a while, enjoying the show.

We picked up the mail on the way home, and in there had quite a surprise.  Just a week ago Wednesday, Debbie and I got our cars registered in Utah.  Debbie ordered a custom plate for her truck, and the clerk there told us it would take 6 to 8 weeks for them to arrive, along with her new registration (the standard plates they just handed us on the spot).  Then they issued us a temporary registration good until July 31st.  Well, her new plates showed up today.  That's ridiculously fast – just nine calendar days, and seven working days since we ordered them.  And that includes delivery by U.S. Post Office, which may well have eaten up half of that!

We love living here!  It's like the exact opposite of the dysfunctional California DMV.  Anyone who lives there can tell you that to get your custom plates there is going to take a lot longer than that – and you'll be lucky if they don't screw it up...
Posted by Unknown at (permalink) 4:25 PM No comments:

Caution!  Put down your morning beverage and prepare to waste a couple hours before reading any posts on this site.  Via friend, former colleague, and proud papa Simon M. (with one kid an up-and-coming golfer, and the other an accomplished computer scientist)...
Posted by Unknown at (permalink) 5:10 AM No comments:

Precomputation renders Diffie-Hellman vulnerable...  The Diffie-Hellman key exchange algorithm is at the heart of a great many cryptographic systems, including those that you likely use every single day.  News that it may be vulnerable isn't exactly comforting, even when that vulnerability costs hundreds of millions of dollars to exploit.  That cost is only going to go down, too.  Today only a major state actor (like, say, the NSA or FAPSI) could afford this, but that could change relatively quickly.

The new attack is enabled by the use of an enormous table of precomputed partial results for a particular prime number used in the Diffie-Hellman scheme.  The details aren't important to understanding the vulnerability.  The key is that you need one of these tables for each possible prime number being used – and that most Diffie-Hellman implementations use one of a very few number of such primes.

There are three main mitigations available, but both are going to be challenging to roll out.  One mitigation is to use longer keys (this always seems to be the mitigation for a vulnerability!).  Another is to stop using the magic few prime numbers, and switch to using frequently generated prime numbers. The last is to quit using classical Diffie-Hellman.

It will be interesting to watch how the world reacts to this.

Much more technical information in the original paper, and here, here, and here...
Posted by Unknown at (permalink) 4:13 AM No comments:

Robot employment act...  The image at right is from the article The Robot Employment Act? on Marginal Revolution.  The article discusses in some detail how a rising minimum wage causes an increase in automation (robots).

The economics of this are very straightforward.  Take a job that needs to be filled 24 hours a day, 7 days a week (typical for a factory job).  That's 21 shifts (8 hours each) per week.  To hire a minimum wage worker at $15 per hour costs the employer $131,040 per year in direct wages, plus roughly $25,000 more in social security, unemployment insurance, etc.  Call it $150,000 a year.  That actually understates the cost a bit, because there is more overhead associated with management, human resources, parking lots, break rooms, rest rooms, etc.  We'll ignore all that (though it's actually not insignificant).

What does a robot cost?  Well, that depends entirely on exactly what that minimum wage worker was doing.  Some jobs are very easily handled by robots: repetitive assembly work, welding, parts painting, etc.  Some are less easily handled: short order cook, maid, house painter, etc.  These are difficult precisely because they require (or seem to require) human judgment, analytic capability, and motor skills.  However, progress in these areas is happening very quickly.  There are, for instance, fully operational short-order cook robots right now.  They don't look anything like the photo above; they're more like automated stoves with food and implement handling capability.  But they work, and they cost about $300,000 - plus $20,000 or so a year in maintenance and power.  Ask any businessman what he'd choose: a worker who costs $150,000 every year, or a robot that costs $300,000 up front and $20,000 a year thereafter, and you'll get the answer very quickly.  The robot wins!

This is how robots are going to take over.  They're going to be the cheapest way to get something done.  The minimum wage raising accelerates this process by forcing workers to cost more – and precisely the class of workers whose job is most easily automated.

Jeff Bezos at Amazon, with his robot armies in his warehouses, is leading the way...
Posted by Unknown at (permalink) 3:54 AM No comments: 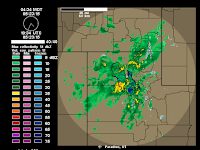 Rain drops in Paradise...  I thought I'd be working outside this morning, finishing up the brush burning.  As I write this, it's gently raining in Paradise, and the weather radar shows more on the way.  It might be just a tad wet out there for a while!

Yesterday afternoon, my rain gauge was showing 2.4 inches for the storm total.  It's been raining since about 8 pm last night, so we're probably getting close to 3 inches at this point...
Posted by Unknown at (permalink) 3:38 AM No comments: