Paradise Ward 3 High Priest's picnic...  A “high priest” in the Mormon Church isn't what it sounds like to non-Mormon ears.  The locals tell me that it's basically the older men in the ward, and in practical terms that's true: most of the local men over about 55 years old are high priests.  But if you read the linked article above, you'll see that it's a bit more than that.

In our local wards (at least; it may well be a church-wide practice), the High Priests of each ward hold an annual picnic.  Though we're not Mormons ourselves, we've been invited to four of these now.  Sometimes it's just me who's invited, as the gathering is men-only.  Sometimes the wives are invited, so we both go.  Obviously the picnics are open to invited guest as well, because we got to go! 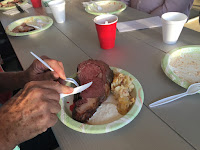 A couple days ago, our neighbors Gary and Elaine invited us to the Paradise Ward 3 High Priest's picnic.  We actually live in ward 2, but the border between ward 2 and ward 3 is State 165, which separates Gary and Elaine from us.  The picnic was held at the Paradise town park, and the festivities started off with a blessing on the meal and some spectacular prime rib.  Gary (in photo at right) – who doesn't look like he could possibly eat a hunk of meat like that – ate two servings of prime rib, along with a healthy selection of the other goodies on offer: rolls, fruit, potato salad in several varieties, cole slaw, and about twenty kinds of desserts.  Debbie and I stuffed our faces very well.  I particularly enjoyed the prime rib (nice and rare like I like it!) and one particular potato salad made with lots of dill and homemade mayonnaise.  Yum!  Debbie destroyed a giant chocolate chip cookie for dessert; I was too full to partake.  Someone there made homemade chocolate sodas that were delicious.  The recipe was simple enough: club soda, a little cream, and some unusually good chocolate syrup (Ghirardelli Black Label Chocolate Sauce).  Good stuff, that was! 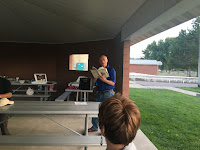 After the meal there were a series of people giving us a little entertainment.  First there was a sing-along to a song I didn't know: Homegrown Tomatoes.  Debbie and I sang along, but we noticed that not too many other people were. :)  After that, we had a reading of cowboy poetry – a funny poem about someone trying to tag a calf by pulling its head into the truck window.  It didn't end well, but it was definitely funny.  Then someone else read a short story, also a very funny one, about getting lost and survival.  All of it was great good fun, with lots of good-natured ribbing and smiling involved.  We got to see a few people we already knew, but a great many more that we'd never met before.  Even though we're not LDS ourselves (and therefore not a member of a ward), most of our neighbors belong to ward 2 and many of the things we get involved with are ward 2 activities – so those are the people we're most likely to meet.  That's a direct consequence of the concentration of LDS members here.  Our closest non-Mormon neighbor is about a mile north of us – quite literally everyone else within about a mile radius of us is a member of the LDS church, including, of course, every single one of our neighbors.

It's a good thing for us that the Mormons are so accepting of non-members in their midst, as we're seriously outnumbered!
Posted by Unknown at (permalink) 6:43 AM No comments: