A paean to capitalism...

A paean to capitalism...  By Claire Berlinski, with a geekly bent, so you really should read it.  The comments are good, too.
Posted by Unknown at (permalink) 6:38 AM No comments:

This is your state...

This is your state ... when progressives take over!  California, New York, and Massachusetts aren't far behind...
Posted by Unknown at (permalink) 6:31 AM No comments:

This just in!  Liberals surprised when reality smacks them upside the head...
Posted by Unknown at (permalink) 6:24 AM No comments:

A mature star ... with a mess of objects around it.  What is it?  One possibility: an advanced civilization.  There are other possibilities, too, but that one is exciting.  Naturally, scientists are all over it...
Posted by Unknown at (permalink) 6:19 AM No comments:

Paradise ponders...  Yesterday I ended up spending almost all day helping with the generator installation, including several runs for parts (and I have another run to make this morning!).  In the morning the “gas guys” showed up and connected the generators to the propane tanks.  To my surprise, they used black iron pipe – which means they had to cut and thread the pipe to length.  In the case of the shed that was easy; for the house, not so much – the regulator was missing from that tank.  I had to make a run first to get the regulator, then to get the special connector to hook it up to the tank.  Late yesterday afternoon we discovered that the regulator was the wrong kind (it's pressure output was too high) and this morning I have to run to get a replacement.  The “run” in this case is 12 miles (each way) to the south end of Logan.  I'm going to be there at 8 am when they open :)

The first photo below shows the shed's backup generator, now completely installed and tested.  I was surprised at how quiet it was when we lit it off for testing – we could easily hold a conversation while standing right next to it.  Of course, this is the smaller one – we'll see how quiet the big one for the house is.  The other two photos are some details of the final wiring and startup process for the generators.

That startup process was far more involved than I'd have imagined.  Most of the work came from installing cold weather kits: a battery warmer (basically a heating pad wrapped around the battery) and a block heater (a circulation pump with a 1500 watt heater that keeps the coolant well above freezing).  Both of these ensure that even on the coldest days the generator will start quickly.  At least, that's the claim :)  The block heater involved considerable plumbing work, including working on components apparently designed for midgets with no skeletons.  Some of that was really challenging to get done!  Also challenging: swapping out the pre-installed carburetor orifice for natural gas for the smaller one needed for propane.  The main problem there was that none of us had the right tool – a very wide, thin flat blade screwdriver would have done the trick, but the ones we had that were wide enough were too thick, and the ones we had that were thin enough were too narrow.  Arggh!  Gerard (the startup guy) solved the problem with a little hammering.  It wasn't pretty, but it worked.

The fact that we had the wrong regulator on the house's propane tank prevented us from test starting the house generator.  In addition, Tyler (the electrician) was short a couple of components, and he'll be back today to finish that up.  Yesterday afternoon the power was turned off to our house for a couple hours, and also to the pump house (the building whose side is visible in the last two photos below).  Tyler got it all turned back on before he left for the day.  However, as I was taking my shower last night – just as I lathered up my hair with shampoo – our water completely shut off.  I took a guess that Tyler forgot to turn the breaker for the pump back on, and that we'd been using water out of the pressure tank all evening.  So I wiped off the shampoo lather with a towel, got dressed, grabbed a flashlight, and wandered out to the pump house (which is about 100' east of hour home).  Sure enough, the pump breaker was off.  Dang.  I flipped it on and by the time I got back in the house and re-undressed, the shower was good again.  Tyler's going to get some grief from me this morning :) 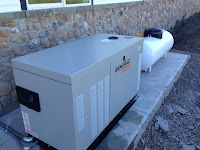 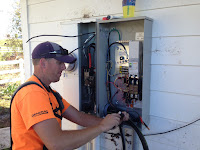 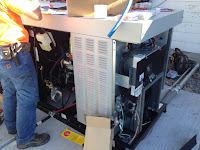 We had a very nice wildlife watching drive on Tuesday evening that I forgot to write about.  We drove out toward Hardware Ranch and up Ant Flat Road where we'd seen the baby beaver a few days before.  On the way up there, we had a kingfisher flying parallel to us, 15' or so from the truck's passenger side.  That was a short, but great view of him!  Then a little further along, pretty close to the turnoff to Ant Flat Road, we spotted a norther harrier hunting out in a big pasture – and watched him for a good ten minutes.  What spectacular low-altitude flyers they are!  After we left there and meandered up Ant Flat Road, we spotted a little gray bird down along the stream – and then saw it bobbing up and down.  A dipper!  That's one in the photo at right (not mine).  We knew they were hear from our reading, but hadn't spotted one before.  We've seen them in the San Juan Mountains, but always briefly.  Here we got to watch this fellow for ten minutes or so, with all the classic dipper behaviors: the bobbing, the swimming, the short hunting flights.  It was great!  Just before we headed for home, we drove out to the Hardware Ranch overlook, where we've seen all sorts of things.  This time there were a few people there with telescopes and binoculars, and when we looked that way with our binoculars we saw why: a herd of elk descending down a hill to the north of the overlook.  They're coming into the winter enclosure (which is the reason the overlook is there) where they'll be protected and fed during the winter.  What a great wildlife adventure!
Posted by Unknown at (permalink) 5:34 AM No comments: