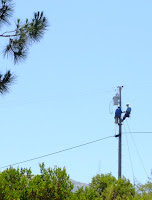 We had a bit of an unusual occurrence here today: SDG&E needed to replace a utility pole, and they did it with a helicopter.  The pole in question was an old wooden pole carrying a “pole pig” (one of the big, cylindrical things you see on lots of poles out in the sticks; the things weigh about 250 pounds).  This particular one supplies the 120VAC to my neighbor's house, but it's actually located within our property line (on an SDG&E easement) – but nowhere near any roads.  It is a hard-to-access piece of dense chaparral.  The SDG&E workers could barely hike to the old pole; they weren't too excited at the thought of carting a new one up there, with a new pole pig, and then hauling the old pole pig out.

You can see them working on the first step above right: they're disconnecting the old pole pig.  After they did that, they lowered it to the ground.  But they didn't start on this until they'd disconnected power from my neighbor's house – and unfortunately for us, that meant our power went off as well.  Apparently they had already dug the hole for the new pole, because just after they finished this step, they started the fun part with the helicopter.  At left you can see the helicopter “parked” and being rigged up to the new steel pole.  This is about a quarter mile from my house.  The bottom of the new pole is toward the right side of the photo, with some men working on it.  In the background, between the helicopter and the pole, you can see the new pole pig all ready to be hauled up there.  A little to the left of that, you can see a red gadget of some kind.  I only figured out what that was after watching them work.  Once the helicopter had dropped the new pole into the hole, the pilot dipped it a few feet to put some slack in the cable holding the pole, then triggered something that caused that red gadget to disconnect from the pole.  It was very slick; just left a loop of cable attached to the pole, and the helicopter was free to depart.

Once the pole was all rigged to the helicopter, I walked back up to my yard to watch the action.  Shortly after I got back, the helicopter roared up from where it was parked, dangling the big steel pole beneath it (at right).  On the way to the new pole's location, they went right over my head, about 50 feet above me.  This was mildly disconcerting :-)

Then the pilot swooped over and down, and dropped it right in the hole with a minimum of fuss (at left).  A couple of men on the ground guided it in, but the pilot was darned close right from the start.  I clocked it: it was 2 minutes, 40 seconds from the time the pilot flew over my head until the time he disconnected from the pole and left.

Once the pole was in the ground, there was still more work for the helicopter.  The next step was to haul that nice, shiny new pole pig up to the new pole to install it.  After that, the helicopter hauled the old pole pig back down to the SDG&E trucks.  Then the helicopter's work was done, and the pilot flew off into the sunset.  Well, not really, but you know what I mean.  Speaking of the pilot, in the photo below (taken as he was lowering the pole) you can see him leaning quite a long way out of his window.  This is all so he could see directly below him.  If you know anything about flying a helicopter, you'll know that it takes two hands to fly one: on your left is the collective, and between your legs is the cyclic.  To hover generally takes constant manipulation of both.  It's a mystery to me how that pilot was able to fly while hanging halfway out the cockpit window!

But the rest of the SDG&E crew wasn't nearly finished yet.  They had to move all the wires (both power and telephone) from the old pole to the new one.  Then they had to connect the new pole pig.  Finally, last step: they had to go back to a different pole (this one was reachable by truck) and reconnect power to my neighbor and us.  Total time for the job: 5 hours, 34 minutes.

One more mystery remains for me.  The crew was up on the new pole working away within a few minutes of the helicopter dropping it off.  Normally for a pole like that you'd need some concrete poured around it – and you'd have to wait for it to cure.  No waiting here!  I'm wondering what magic they used to make that pole safe and secure in such a hurry...
Posted by Unknown at (permalink) 5:44 PM No comments:

Posted by Unknown at (permalink) 5:48 AM No comments:

This time from the lamestream leader (the New York Times), nicely caught and laid out by Mollie Hemingway...
Posted by Unknown at (permalink) 5:46 AM No comments:

A strange twist on a subject I've blogged about before: the problem of hard radiation exposure on any manned space mission beyond the near-Earth environment.  This involves reality TV shows, Mars, and Snooki...
Posted by Unknown at (permalink) 4:36 AM 1 comment:

Astronomers at the InfraRed Telescope Facility in Hawai'i captured this video of a small asteroid that passed quite close to the Earth just a couple of days ago:

Posted by Unknown at (permalink) 4:33 AM No comments:

The Most Arrogant Man in the World...

The interesting, hardball campaign commercials have already started, long before the election...

Posted by Unknown at (permalink) 4:28 AM No comments: