Dog agility (?) contest fail, but dog win...  The video at right is labeled as being a Finnish dog agility contest, but if so, it's different than any other agility contest I've seen.  This is more like an obedience trial, wherein the dog is asked to ignore all sorts of treats and distractions to do what his handler asks.

Anyhow, in the video the golden retriever's handler is quite disappointed – but the dog is thinking “Best game evah!”

Hearing the Finnish language, and seeing the Finnish faces, brought back all sorts of good memories.  Finland is across the Baltic Sea from Estonia; the languages are closely related, as are the people...
Posted by Unknown at (permalink) 5:57 AM No comments:

Transistor radios...  The photo at right is from this article about the Regency TR-1, the original transistor radio.  It was introduced for Christmas 60 years.


I never had that particular model of transistor radio, but I did have two transistor radios when I was a kid.  The first one looked very much like the TR-1, except that its case was beige.  I can still remember the raised letters on its front proudly declaring that it was a “7 Transistor Radio!”.

Of course I took that radio apart to see what was inside, and it was very much like the image at left.  That radio was AM only, its audio was horribly bad, the battery didn't last very long, and I thought it was a technological marvel.  The only other “portable” radios available back then were based on vacuum tubes.  Those things were the size of a toolbox, and weighed 10 pounds or more.  They used gigantic batteries (“B batteries”) that also didn't last long, and cost a small fortune.  By comparison, the transistor radio was a technological marvel, though today we would think it was a piece of junk. 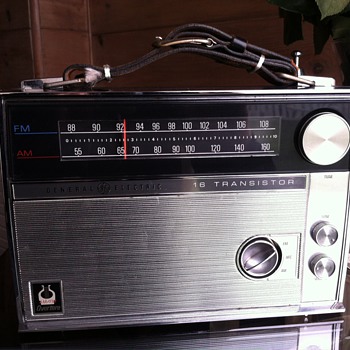 Later, when I was 15 or so, I bought myself a General Electric AM/FM transistor radio, quite possibly the model at right.  It was a major upgrade: a 16 transistor radio (modern radios have hundreds of thousands of transistors).  I took that thing nearly everywhere I went for several years, most especially to several jobs that I had.  Its audio quality was a bit better than the first radio I had, and the batteries lasted much longer – a couple weeks at a time.

These days I rarely listen to the radio unless I'm driving – and even then, I'm more likely to listen to the music stored on my phone.  Back in the '60s, though, the radio stations were my primary access to music.  I couldn't afford to buy many records, and there was no Internet to download music from.  There were no iPods (or even Walkmen).  If you wanted to listen to a diverse set of music, the radio was just about the only option open to most people.  So we listened.

As I'm writing this, I'm listening to Bob Dylan – from my computer, not my radio.  “Baby Blue” is on a playlist, and I can play it whenever I feel like it, not when the DJ gets the urge.  Even for someone like me, who lived through the '60s, it's hard to imagine listening to music the way we did then...
Posted by Unknown at (permalink) 5:52 AM No comments:

American composer is a hit in Estonia...

American composer is a hit in Estonia...  My mom knows that I love all things Estonian, so when she read this article about Susan Nelson, she sent it along to me.  Susan is a composer of music for hand-rung bells and guitar, like the piece Avalon in the video at right.  She's a resident of Hamilton, New Jersey, near the farm I grew up on.

Estonia comes into this story in an interesting way.  For it to make sense, you have to understand that music has a very special place in Estonian culture.  For its size (Estonia has just 1.5 million people), Estonia has an amazingly diverse and intense music scene, including several symphony orchestras, dozens of music schools, and more music venues than you can shake a stick at.  The 1991 peaceful revolution that earned Estonia its independence is called “The Singing Revolution” because of the central role that music and song played in unifying the Estonian people.  Estonians are as serious about their music as they are about their beer (with more breweries per capita than any other country on earth).

Estonian musicians noticed Susan's work, and started playing it.  Her pieces became quite popular there.  As that article relates, Susan didn't even know about this until an Estonian conductor wrote her on Facebook a few years ago.  Last year, the Estonians honored her with a concert of her own work (on YouTube) – an “Author’s Concert”.

What a great story!  And now at least two Americans from Hamilton Township, New Jersey have been to Estonia :)
Posted by Unknown at (permalink) 5:25 AM 2 comments:

“He spilled the beans on our entire deception.”

“He spilled the beans on our entire deception.”  Hitler finds out that Gruber revealed the ObamaCare deception.  I love the little hook at the end – you know there's another one of these coming :)
Posted by Unknown at (permalink) 5:09 AM No comments: