The hits just keep on comin':

Yet another egregious error in the IPCC report.  This time it turns out that their claim of AGW-caused 50% reduction in African agricultural production is not based on science at all.

In a good read, Walter Russell Mead discusses why climate science is in trouble.  And of all places, Canada's uber-liberal Globe and Mail publishes a skeptic-friendly piece by Margaret Wente on the great global warming collapse.
Posted by Unknown at (permalink) 7:53 AM No comments: 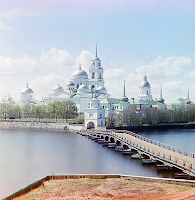 Fascinating collection of early color photography in Russia, by Sergei Mikhailovich Prokudin-Gorskii. Click to enlarge the example at right.
Posted by Unknown at (permalink) 7:44 AM No comments:

The Benefits of Snowstorms...

From TJIC, too short and too monolithic to excerpt:


Apparently the seat of the national government is snowed in and everone is trapped in their houses.

I predict that with government officials unable to govern and convene press conferences, nationwide the economy will be stable and mass layoffs will be put on hold.

…at least until the plows get out there and let the politicians and bureaucrats back into their offices.

As he would say: Har!
Posted by Unknown at (permalink) 7:39 AM No comments:

NeoNeocon, who has some knowledge in the field, is quite disturbed by Obama's overt narcissism.  Her last paragraph chills me:


I’m not saying it will come to pass in exactly that way, and that Obama will declare himself to be a deity. In fact, I’ll even go on record as saying he won’t. Nevertheless, something is very wrong with this man, and it is growing stronger every day.

Posted by Unknown at (permalink) 7:34 AM No comments:

Gwynnie at Maggie's Farm does the math on the “Cash for Clunkers” program.  It ain't pretty.
Posted by Unknown at (permalink) 7:29 AM No comments:

I watched Sarah Palin's Tea Party Convention keynote this morning on YouTube.  Awesome speech, and chock full of points I agree with.  Some nice comedic moments, too, like her one-liner aimed squarely at Obama: “How's that hopey-changey thing workin' out?”  There was relatively little that I flat out disagreed with, or that grated.  In particular, the overt religious ideology that permeated her book was absent.

The woman can sure give a speech.  I'll take her folksy, common-sense style over Obama's supposed oratory magnificence any day of the week.

Could I support her in a run for President?  Possibly, though I don't think it's likely.  It's impossible to predict now what's going to happen in 2012, though one scenario being frequently batted around is an Obama vs. Palin matchup.  What would I do then?  Most likely I'd be torn between sitting out the election (for lack of a candidate I believed in) or voting for Palin as a way of saying “No more Obama!”

Watching her give this speech gave me another thought, though: it seems at least possible that Sarah Palin will emerge as the leader (or figurehead) of a political movement whose aggregate capability was attractive to me.  It would be, then, more like a team of people running rather than just Sarah Palin.  If that turned out to be the case, I'd find a vote for Palin much less troubling.

One prediction I think is a safe one: Sarah Palin will somehow be involved in the 2012 presidential race (even if not as a candidate), and her presence will make the race much more interesting – and probably more about the issues that I care about than otherwise...
Posted by Unknown at (permalink) 7:25 AM No comments: