Wow!  We got 1.3 inches of rain overnight, and there's a lot more coming.  When this storm is over and the lawns dry out a little bit, I think I'll be putting away my irrigation pipes for the season...
Posted by Unknown at (permalink) 7:21 AM No comments:

It's raining in Paradise...

It's raining in Paradise...  It started last night, got intense a couple times during the night (the noise on our steel roof woke me up!), and we're expecting the most intense part tonight and tomorrow.  It's still dark here, so I can't read our rain gauge to see how much we got.

Yesterday afternoon we feasted on leftover chicken and dumpling soup, again with new dumplings.  It just keeps getting better as it sits in the refrigerator!  I'm looking forward to it again today – the perfect “rainy day food”...
Posted by Unknown at (permalink) 5:47 AM No comments:

Plans for LEO satellite Internet network filed...  Elon Musk's SpaceX has filed plans for a low earth orbit (LEO) network of satellites to provide broadband Internet service to the entire world.  This is a key step toward bringing the plan to fruition.  Funding seems to be assured, especially with Google's enormous commitment.  LEO satellites are vastly superior to the geosynchronous satellites used by existing satellite-based Internet service providers, for the simple reason that they're (much) closer to Earth.  This reduces the latency from awful (for the geosynchronous birds) to normal (for the LEO birds).

If Google and Musk pull this off, the world is going to suddenly get very much smaller, again...
Posted by Unknown at (permalink) 5:31 AM No comments:

Salmon in Paradise...  Debbie and I took a drive last night to Cinnamon Creek, the main source of water for Porcupine Reservoir.  We'd been told by a friend that “the salmon were running” up the creek, a twice-annual event (once in September, again in October).  This was the first we'd heard anything about salmon in the local waters!  The video at right is not mine, but it shows the salmon run in Cinnamon Creek in 2013.

I did a little research into the topic, and discovered that the salmon we have here are sockeye salmon (Oncorhynchus nerka) – the same salmon found in the northern Pacific Ocean – but part of a landlocked population that never makes it to the ocean.  These are called “kokanee salmon”, but are actually the identical species to the ones found in the ocean.  In our case, the population is based in Porcupine Reservoir itself, and they spawn up Cinnamon Creek (and perhaps some of the smaller feeder creeks as well, but I'm not sure about that). It turns out that Porcupine Reservoir is one of just three in Utah that were stocked with a sockeye population.  How Porcupine Reservoir was selected for that is something I'd like to find out.

When we got to Cinnamon Creek (after seeing some nice fall color along the way), we discovered that the trail down to the water was too rugged for Debbie to attempt on crutches.  So poor Debbie waited for me in the truck while I hiked down to see what I could see.  Here are some photos of what I found: 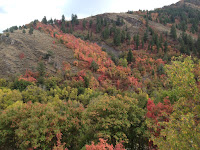 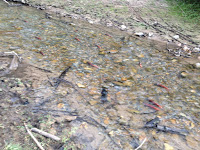 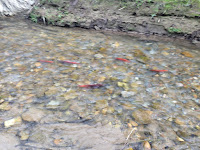 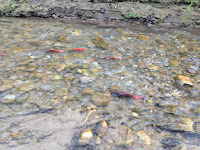