Anniversary today!  One year ago today, I retired.  Yay!
Posted by Unknown at (permalink) 8:26 AM No comments:

California leads the way ... to new heights of nanny-statism.  Starting January 1, it is now illegal for sushi chefs in California to make sushi with their bare hands.  They are now required to wear gloves.  Seriously.

The bill instituting this requirement was AB 1252, approved on October 4, 2013 by Governor Jerry “Moonbeam” Brown.
Posted by Unknown at (permalink) 8:24 AM No comments:

Listen up, That One! 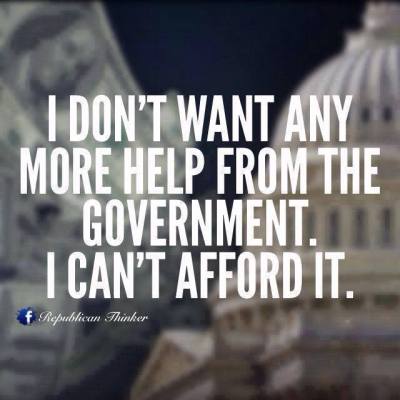 Listen up, That One!
Posted by Unknown at (permalink) 8:13 AM No comments:

The week in images...

The week in images...  Steven Hayward, writing at Powerline, has a wonderful collection of images from the week, like the one at right...
Posted by Unknown at (permalink) 8:12 AM No comments:

Senatorial pressure getting attention...  Senator Udall's attempt to quash the release of ObamaCare cancellation numbers is getting a lot more attention today...
Posted by Unknown at (permalink) 8:03 AM No comments:

Analog computers coming back into vogue?

Analog computers coming back into vogue?  Well, maybe.  New metamaterials are providing opportunities to build components that perform basic analog computation (amplify, invert, add, subtract, multiply, divide, differentiate, integrate, etc.) with light, rather than electricity.  These could be used either directly as an analog computer, or indirectly as components in a light-based digital computer (much as transistors, resistors, capacitors, and inductors are used to make electronic computers).

Back in the '70s, when I was in the U.S. Navy, our ship still had quite a few analog computational systems still on board and in use.  The biggest, baddest of them was the all-analog fire control computer that ran the Terrier anti-aircraft missile system that was my ship's primary defensive weapon.  These analog systems were electro-mechanical beasts, full of precision electronic components, synchro motors, gears (some of them very complex), and oddly shaped cams that implemented arbitrary math functions.  Maintaining those computers was a never-ending job, mainly involving cleaning (dust and dirt actually affected their accuracy!) and lubricating.  A few systems also had electronic calibration that needed regular tuning.  But...these systems were (at that time) smaller than digital systems with the same capability, and in certain cases were faster.  These days a digital computer would win the race hands down, but back then, when our mainframe had a blazing 100KHz clock, an analog computer doing a few multiplies, divides, and differentiations, would beat the digital computer handily...
Posted by Unknown at (permalink) 8:01 AM No comments:

Cosmic magnifying glass...  An anomalously bright supernova was originally classified as a new type of super-bright supernova, because it was 30 times brighter than expected.  Now another astronomer proposes that it's actually a well-known Type Ia supernova, but is seen from earth as magnified by the gravitational lensing of an intervening galaxy (as seen from Earth).  The evidence for this new hypothesis is at the fringe of data the best current telescopes can provide – but newer, larger telescopes coming on line in the next few years should be able to settle the question...
Posted by Unknown at (permalink) 7:50 AM No comments:

Geek: fast arithmetic entropy encoding...  This post, on finite state entropy encoding for lossless data compression, caught my eye for two reasons.  First, I have a general interest in data compression.  Secondly, the approach the author took has the same objectives as the decimal number formatting and parsing project I'm currently working on – accomplishing its job entirely with additions, shifts, and masks (no multiplies and especially no divides)...
Posted by Unknown at (permalink) 7:42 AM No comments: