Paradise ponders, “I am grout!” edition...

Paradise ponders, “I am grout!” edition...  That title is a nod to Guardians of the Galaxy, which many who know me might be quite surprised to find that (a) I've actually watched it, and (b) that Debbie and I thoroughly enjoyed it and the rest of the Marvel series it's a part of.

We just finished watching (on Blu-Ray) another series that I have a very different reaction to: The Hobbit, in three parts.  This is the preface, basically, to the Lord of the Rings.  That's also a three part sequence of movies, just as there were three books.  The Hobbit, in book form, is a single slim volume – far shorter than any of the three volumes of Lord of the Rings.  When making the Lord of the Rings movie, much material from the books had to be eliminated.  When making The Hobbit movie, apparently Peter Jackson felt the need to add a lot of material – including large quantities of stuff that Tolkien never had in any of his books.  The result, for me, was that I was almost constantly experiencing mental disjoints as I watched the movie.  Parts of the story were changed almost beyond recognition, without any reason that I could see.  The added parts were often distractions from the relatively simple and direct story line in Tolkien's original.  At times, especially in the last film, it seemed like the movie was mainly a vehicle for the (admittedly spectacular) computer-generated special effects – and I wanted The Hobbit, dammit, not someone showing off their render farm.  Call me a Tolkien snob if you will, but I was profoundly disappointed with The Hobbit as a movie.  I have some complaints about the Lord of the Rings movies, too, but they pale into insignificance compared with those I have about The Hobbit. 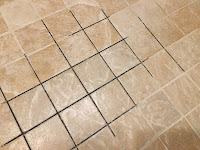 So, “I am grout!”  Today my big project was fixing the grout in our shower.  This has been a thorn in our side for three years now, ever since we remodeled our master bathroom.  The tile was originally grouted with a modern grout that is based on silicone, rather than old-fashioned mortar.  Our contractor insisted on using it, telling us that it was far more durable in an application like a shower, where it would frequently get wet.  That sounded great to me, until (after a few months) pieces of the grout on the floor (and only the floor) turned soft and came out.  We had holey grout until we got the contractor back in to redo it.  A few months later, we had holes again.  The poor contractor (whom we really liked) came back again, refused to charge us, and redid the entire floor.  A few months later (you guessed it), holes again.  At that point I basically gave up, and figured that when we got enough holes to really upset us we'd re-grout the whole thing with old-fashioned mortar-based grout.  I'm pretty sure that wouldn't turn soft!

Well, when we had the sun room and mud room tiled last month, I asked the craftsman about the shower.  He recommended a silicone-based sanded caulk (not actually grout at all), used only after thoroughly drying the floor with a hair dryer.  I ordered that caulk (found it on Amazon, in the same color as our grout), and it arrived a couple days ago.

So today I spent a few hours with a linoleum knife, poking and prodding all over the shower floor to find all the soft spots in the grout, and cutting it out.  I can see no pattern that would explain why certain areas of grout turned soft – it looks totally random to me.  About 5% of the floor's grout turned soft; the rest was in perfect shape.  Weird.  Anyway, with a hair dryer, linoleum knife, and vacuum, I got all the soft grout I could find removed.  Then I applied the caulk, which took only 30 minutes or so.  I have to let it cure for 3 days before using the shower.  The color match isn't perfect, but it's good enough.

Hopefully this was good advice, and the caulk will work where the grout didn't.  If not, my next step will be to find a contractor to remove the new-fangled grout and put the old-fashioned stuff in instead...
Posted by Unknown at (permalink) 12:17 PM No comments:

National Security Council changes...  Here's a good example where Trump has done something that worries me.  He's changed the membership of the National Security Council in three ways:
Some of Trump's other moves (example: appointing Mattis as SoD) I applaud, and I find comforting.  Other moves, like this one, disturb me.  It's impossible to put a single number on how good or bad each of them is, but if I tried and then tried to analyze them, at the moment I think I'd come out with something like this:
I sure would love to be pleasantly surprised, but I'm not counting on it.

Because we have so many LDS people here, our grocery stores prominently feature displays of food that can be stored for long periods of time.  I'm paying more attention to those displays these days.  I might even start buying some...
Posted by Unknown at (permalink) 6:41 AM No comments: