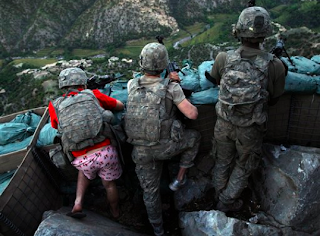 One of our warriors, caught by a firefight with the Taliban at an, err, inopportune moment. The photo made him famous. Now this:

FORT WORTH, Texas (AP) - The soldier who was photographed fighting the Taliban in his boxer shorts says he's glad to be back home in Texas after his yearlong deployment to Afghanistan—especially on the Fourth of July.

Specialist Zachary Boyd says he initially thought he'd get in trouble after an Associated Press photo showed him with other soldiers behind sandbags—while wearing his pink boxers and flip-flops, plus his helmet and bulletproof vest.

The Fort Worth soldier said he had jumped up from a nap when his unit came under fire and didn't want to waste time putting on his uniform.

But Boyd has been praised for his courage.

And now that he's home in Fort Worth he says his boxers will be displayed in the 1st Infantry Division museum at Fort Riley, Kansas.

Posted by Unknown at (permalink) 1:18 PM No comments:

Posted by Unknown at (permalink) 1:17 PM No comments:

Two hundred and thirty three years ago today, our ancestors declared this country's independence from Britain. Our soldiers fought the Revolutionary War to make that declaration reality, and in all the intervening years, through many skirmishes, battles, and wars, our armed forces have kept this country a free and independent nation.

If you happen to see one of our warriors today, take a moment to thank them, won't you? You'll be glad you did, too. A couple of weeks ago I bought a cup of coffee and doughnuts for a couple of Army soldiers as we all waited for our flights at the Houston Airport. I sat down with them for a short conversation. Turns out they were both headed to Afghanistan on their second tour, and they were looking forward to it – they feel like they're doing something that matters, that makes a difference. And their smiles and warm words told me how much it meant to them to be acknowledged and appreciated...

If you'd like to make a more tangible contribution, I can't think of a better way than donating items, money, or your time to Homefront San Diego. These fine folks – all volunteers – find ways to help out the families of our deployed warriors.

San Diego is an expensive area to live in, yet we have more military here than in any other County in the U.S. Many of our lower-ranking military really don't make enough money to make ends meet – and when they're deployed, things can get very difficult for the family they left behind. Simple things that most of us would consider just irritating can become almost insurmountable challenges for them. For instance, the wife of an E-4 Marine with a couple of kids may simply have no way to handle a transmission problem on her car – she can't afford to get it fixed, she can't fix it herself, and yet she absolutely has to have the car to get around. Homefront San Diego will step into such a situation and find a way to resolve it. They're very creative about the solutions – maybe they'll find a local shop to fix it for free (or for parts cost); maybe they'll find a replacement car; or maybe they'll simply pay for getting it fixed. But one way or the other, they'll get that family back in its car. One can easily imagine what a relief it would be to the deployed warrior to know that his or her family has a safety net like Homefront San Diego to fall back on...

The entire planet knows that the state of California is in the midst of an awful budget crisis. The legislature has been unable to agree on a budget, primarily because the politicians are unable to bring themselves to significantly reduce expenses, nor can they find any politically acceptable way to raise taxes to pay for what they want to spend. Meanwhile, the state is completely out of money and has taken to paying many with IOUs, and forcing state workers to take several days per month in unpaid furloughs.

So one could be forgiven for thinking that the state legislators would be busy in meetings focused on resolving the impasse. If that's you, then your innocence and naivete are showing. Our legislators are meeting, all right – but they're discussing just about anything other than the budget impasse. For example, here's some video of a committee debating the propriety of lopping cow tails (with Schwarzennegger's admonishments):

The Obama administration's total commitment to respecting the science.

Posted by Unknown at (permalink) 8:03 AM No comments: 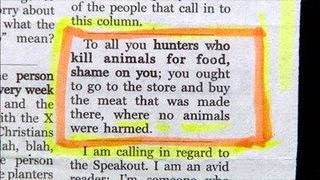 No animal was hurt in making that meat at your grocery store.

I really don't know what to say.

But consider this: the person who wrote this is (presumably) an adult – and an eligible voter. What does that tell you about the viability of a representative democracy? Hmm?

Posted by Unknown at (permalink) 7:58 AM No comments:

How the original Declaration of Independence, handwritten in ink on parchment, is preserved.