A Candidate I Wish I Could Vote For...

Allen West is running for the U.S. House of Representatives for Florida district 22.  I'm a resident of Taxifornia Mexifornia California, so I can't vote for him.  If his service in Iraq (which I've posted about previously) is any guide, he's exactly the kind of leader I'd like to have representing me – the kind of leader who's looking out for me!  Here's a recent campaign ad: 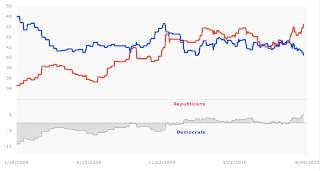 From RealClearPolitics, this graph nicely shows the so-called generic ballot tracking poll.  The questions asked on this poll gauge voters' perceptions of the Republicans (red) and Democrats (blue) generically, as opposed to any particular candidate.  If you compare the history of this poll's results to the actual election outcomes, what you find is that the poll slightly understates the outcome for Republicans.  That is, the respondents to these polls tend to vote for Republicans a little more than what the poll indicates.

Right now, the Republicans lead the Democrats by 6.5% – a 19.9% gain since Obama's first days in office.  That's a remarkable gain, the largest the poll has ever measured.  In 1994, the last time the Republicans took over Congress, the Republicans had just a 3.5% lead in this poll.

The portents are good for the Republicans...
Posted by Unknown at (permalink) 4:43 AM No comments:

Modern digital technology lets an artist superimpose photos taken during World War II onto modern photos of the same places.  I don't know about you, but I found the images to be very thought-provoking.  Perhaps this is because I'm currently reading about World War II...
Posted by Unknown at (permalink) 4:31 AM No comments:

On Mars, that is.  This image was captured by Opportunity, still hard at work on the surface of Mars, 6.5 years after its 90 day mission “ended”.  This is the first dust devil seen by Opportunity.  It's twin Spirit, halfway around the planet, has seen dozens of them.

Winter is just ending in Spirit's part of Mars, and NASA has not yet heard from it since it shut down to “hibernate” for the winter.  It may be the end of the line for Spirit; the reports from NASA don't sound very optimistic.  The main problem was that it got stuck in one place of soft soil (probably resting its belly on a rock), and couldn't move to a nice, sunny spot for the winter...
Posted by Unknown at (permalink) 4:27 AM No comments: 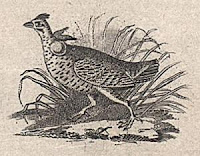 Found by historians on a New Jersey banknote.  The bird, if you're wondering, is the now-extinct (but then still living) kind of grouse called the Heath Hen...
Posted by Unknown at (permalink) 4:22 AM No comments: