Eight inch floppies still in use...

Eight inch floppies still in use ... in our ICBM silos.  They're older than the young men and women stationed there.  Does anyone still make those things?  All I could find were a few on sale, as rare antiques :)
Posted by Unknown at (permalink) 7:01 AM No comments:

California leads the way ... in attracting businesses to other states!  Some big employers are picking up and moving out, often to Texas.  What big businesses?  Well, how about Toyota America?
Posted by Unknown at (permalink) 6:55 AM No comments: 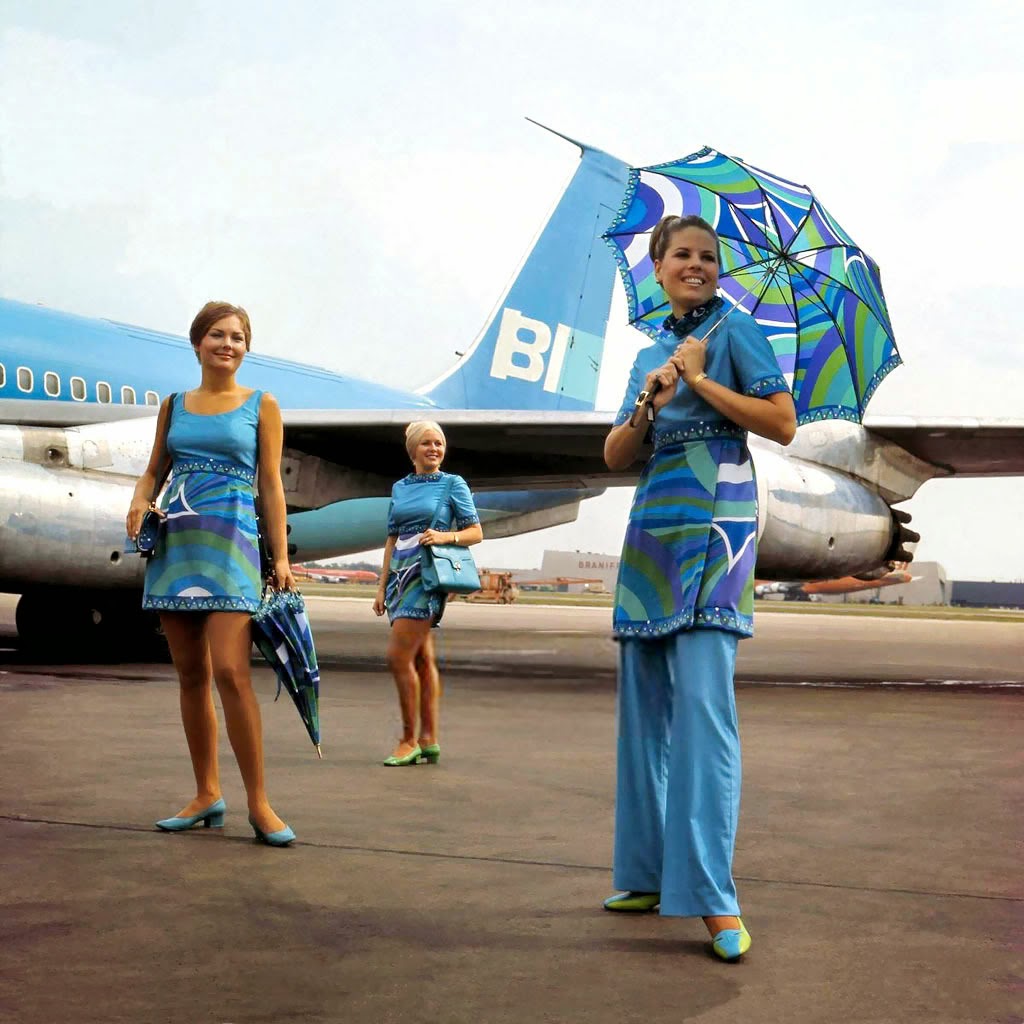 Vintage stewardesses...  Back in prehistoric times, before the oh-so-politically-correct term “flight attendants” entered our lexicon, there were “stewardesses”.  Generally they were attractive young women.  Oh, how sexist!  But rather nice, actually :)

Americans who haven't traveled outside this country might not realize that in much of the world, such stewardesses are still the norm.  That's especially true in eastern Europe and Asia...
Posted by Unknown at (permalink) 6:49 AM No comments:

Binary fractions bit Donald Knuth!  At infrequent intervals, Donald Knuth publishes notes on TeX updates.  Even though I haven't used TeX for years, I always read these because, well, Knuth.  This one has a passage that tickled my fancy, as it's about one of my own pet peeves: the use of binary fractions (including binary floating point numbers).  It seems that Donald Knuth, one of the pantheon of computer science gods, was bitten by them, too:


I made the foolish mistake of using binary fractions internally, while providing approximate decimal equivalents in the user interface. I should have defined a scaled point to be 1/100000 of a printer's point, thereby making internal and external representations coincide. This anomaly, which is discussed further in [5], is the only real regret that I have today about TeX's original design.

The gods are fallible, too :)

Companies I worked for have been burned by this issue a surprising number of times.  The most memorable case I ran into was a company that implemented an electronic stock and option trading platform that used binary floating point math to hold monetary values.  Big, big problems resulted.  To fix it, I had to do battle with a dozen or so senior engineers – very experienced and generally competent folks – who had a great deal of trouble accepting the simple fact that binary floating point numbers are incapable of exactly representing a great many decimal fractions...
Posted by Unknown at (permalink) 6:00 AM No comments:

History of computers in space...

History of computers in space ... NASA's pages.  Lots of good stuff for technology history geeks here...
Posted by Unknown at (permalink) 5:48 AM No comments:

Nutrition “science” ... is modern, politically-correct snake oil.  The more it is seriously examined, the less valid it gets...
Posted by Unknown at (permalink) 5:47 AM 1 comment:

The IPCC report is worthless...

The IPCC report is worthless...  That's not really news, if you've been listening.  The latest revelation just adds to the pile of evidence...
Posted by Unknown at (permalink) 5:45 AM No comments:

The future of orthopedic casts?

The future of orthopedic casts?  3D printing and 3D scanning are going to change a lot of things...
Posted by Unknown at (permalink) 5:43 AM No comments:

“Sometimes, it makes my blood boil...”

“Sometimes, it makes my blood boil...”  I'll say!  It's hard to believe this lawsuit could succeed, even in Canada.  I sure hope it doesn't...
Posted by Unknown at (permalink) 5:41 AM No comments:

The first computers I ever worked with (Univac CP-642A) used exactly this kind of magnetic core bit plane memory – 30 planes, each with 32,768 bits.  They occupied about one cubic yard of the computer, packed with not only the bit planes themselves, but lots of both analog and digital circuitry.  They required constant adjustment (read and write current levels, pulse length and timing, and sense line gain), a tedious and involved procedure that was part art and part science.  In the U.S. Navy school that taught me how computers worked, and how to repair them, I also learned about older technologies: storage tubes and mercury delay line memories.  Weird stuff, by today's standards – but exotic and bleeding edge stuff back then...

Along the same lines, this video talks about “rope memory” the first practical ROM.  The first computers I worked on had something even more primitive: plugboard ROM, where the bits were programmed by placing pins in a “plugboard”.  Those computers had 32 words of 30-bit ROM, and somehow we got a bootstrap loader in that tiny bit of space!  Later I worked on computers that had capacitive ROMs, where the bits were programmed by the presence or absence of small circular areas on printed circuit boards.  Those ROMs had 64 words of 30-bit ROM – double the size.  Woo hoo!

The first microcomputer I built used a 1702 UV-erasable EPROM, with 256 bytes of ROM – more than the biggest mainframe ROM I'd worked on.  Those chips, as I recall, cost about $50 then – which seemed dirt cheap to me.  My first digital design project was a programmer for those 1702 EPROMs, so that I could enter two hexadecimal digits for each byte on a keypad and automatically program it.  Before I built this programmer, the only way I could “burn” code into a 1702 was to mail it off to a friend in San Diego who had a programmer, along with a hand-typed listing of the code I wanted.  When my ship was floating around in the Indian Ocean, the round trip could take several months!  I had a big incentive to build that programmer :)
Posted by Unknown at (permalink) 5:38 AM No comments:

Another gray-haired programmer ... describing what his early days as a programmer were like.  Most programmers my age seem to have similar experiences.

My own programming beginnings were much different, primarily because I had no access to programming tools (compilers, assemblers, linkers, debuggers, etc.).  In the early '70s I began programming on Univac “mainframe” computers owned by the U.S. Navy.  These were in a lab used for training repair technicians.  The only way (initially) to load a program was by using the switches and lights on the front panel to load the program's machine code, one 30-bit word at a time.  I wrote that code on lined paper, assembly mnemonics on the left, octal machine code (hand-assembled!) on the right.  When I modified code, to avoid re-assembling all that by hand, I'd put a jump instruction at the first modified line of code, to jump to a patch that implemented the change, and then jumped back.  After a few rounds of debugging, my code could be quite a mess :)

Later, out of sheer desperation, I developed my own software engineering tools.  At the time, I had no idea that better tools existed elsewhere; I was just trying to save myself from the tedium of manual machine code entry.  I developed tools that were the rough equivalents of monitors, loaders, assemblers, debuggers, and linkers, though I didn't know them by those names.

I went through the same sequence when I first started programming microcomputers, in 1975 – though by then I knew of the existence of commercial tools.  However, those tools generally ran on minicomputers (like the PDP-11) that I had no access to and couldn't possibly afford to buy.  Even the software tools were out of reach financially.  So once again I wrote my own tools, for several microcomputers (especially the Motorola 6800, RCA 1802, Intel 8080, and Zilog Z80).

Today very few people would consider writing their own software development tools.  For one thing, excellent tools are readily available on the Internet for free, thus removing all the things that might force one into writing one's own tools.  It's also true, though, that the tools have become far more complex as the CPUs have become more and more powerful.  In 1975, one could write a functional assembler in a few hundred lines of code over a week or two.  A really nice compiler might be three or four times that effort.  A nice assembler for today's Intel chips would probably take several years of work.

I've often noted that having had the experience of writing my own tools gives me a much different perspective on programming than many younger programmers have.  Mostly this manifests in having a reasonably good understanding of how those tools work, whereas for many perfectly competent programmers, the mechanism by which their (say) Java source code actually gets executed is a complete mystery – and one which seldom needs to be explored...
Posted by Unknown at (permalink) 5:21 AM No comments:

A British foreshadowing...  Many American liberal academics (“liberal” is almost redundant in that phrase) point to Britain's less-than-absolute free speech as a model for the United States.  They'd like to enshrine a new right: the right to not be offended.  That British way has led to an absurdity that I find appalling, though I'm sure many on the left would beg to differ.

In Winchester, England, a British political candidate stood up to speak.  He quoted the great British leader Winston Churchill – and was arrested.  Really.

That's where we're headed.  Elements of this kind of speech nannyism are already in place on American college campuses, where such a speech would be similarly banned.  One more progressive on the Supreme Court and such arrests are likely to become possible here...
Posted by Unknown at (permalink) 4:45 AM No comments:

Cliven Bundy...  I haven't said anything about this incident because I was completely uncertain what the heck was going on.  Some time has gone by now, and it looks to me like most of the salient facts are public.  They are:
I think the main problem with all this is the last two bullet points and the simple fact that the federal government owns so much land in the west.  The former is simply inexcusable, and the latter is already under pressure through normal legislative and political means.  Dave Carter, writing at Ricochet, says it much better than I can...

Posted by Unknown at (permalink) 4:35 AM No comments: