Senator Christopher Dodd, Democrat, Connecticut, announced this morning that he will not seek re-election in 2010.  This is probably a smart move on his part, as the polls are showing that he'd lose even if he were running against Osama Bin Laden.  This drop in his popularity came about because his corruption has been exposed – he's been trading his powerful position on the Finance Committee for favors from the financial industry for years.  The most notorious examples of this are the sweetheart (low interest) mortgages he received from Countrywide, and the multi-million dollar “cottage” some “friends” in the financial industry gave him.  There's much, much more; it's now crystal-clear that Dodd is a corruptocrat of the first order.  He deserves to go to jail, but getting him out of office is a reasonable start.

But Dodd's bailing out can also be seen as part of a larger pattern here: Democrats have been retiring at a prodigious rate.  If I'm counting correctly, we're now up to 11 House members and 3 Senate members who are not coming back after 2010.  If the Republicans were to pick up some of those House seats and just one of the Senate seats, the Congressional balance of power would be significantly shifted away from the Democrats.  It would be a Congress much more conducive to complete gridlock – my favorite place for a federal government to be (because nearly everything they do is bad, so the less they can do, the better).

Some observers are predicting that the folks who have already bailed out are just the beginning of a tsunami of “retiring” Democrats.  If that's true, that's just lovely – and a very hopeful omen for the outcome of the 2010 mid-terms...
Posted by Unknown at (permalink) 5:12 AM 1 comment:

ClimateGate: See For Yourself... 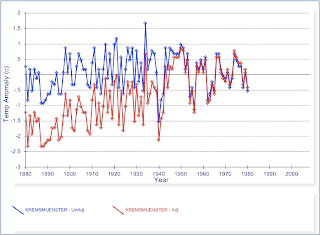 American Thinker is running a series of daily graphs showing how the AGW folks “adjusted” the raw station temperature data.  Oddly enough, those adjustments all seem to change data showing one thing into data showing another thing altogether!

The graph at right is their graph for yesterday.  It shows the raw data (in blue) and “adjusted&rddquo; data (in red) for Kremsmuenster, Austria.

Just by eyeballing it, you can see that the raw data shows little if any trend in any direction, while the adjusted data shows a clear warming trend.

As many observers have noted, if you take all the raw data that independent analysts have been able to obtain, there is no clear trend in it.  The trend emerges only after these sorts of adjustments have been applied.  It's as though you weighed yourself every morning for 10 years, plotted the resulting data, saw that there was no declining weight pattern – so then you go back and “adjust” the data to show that you had a higher weight in the past.  Now you can claim that your weight is going down!
Posted by Unknown at (permalink) 5:02 AM No comments: