Fireplace progress...  I spent much of the day working with the two masons as they got started on our new fireplace.  The first thing they did was to clean out all the poorly-done elements of the old fireplace, and there were several of them.  Then we had to re-mount the mantle because the mounting plate I used was the thickness of “normal” thin veneer rock, and the rock I actually bought was much thinner.  We finished up that stuff by about 2 pm, then the masons mounted their tarpaper underlayment and armature wire to the wall.

At that point they were ready to actually put up some rock, and they did – as you can see in the photos, the bottom two rows of rock are up.  It was fascinating to watch the masons work – the things they do range from the violent and coarse (like removing old blocks and mortar) to the delicate and fine (like the final step of brushing the mortar between the stones).  Some of what they do requires great skill and artistry, such as choosing rocks of the right shape and orientation to artfully fit with what's already up, and the fine work of “striking” – getting the mortar between the stones to look attractive.  They use a narrow, long trowel to do most of the striking, but finish it up with bare fingers and a light brushing at the end.  Like so many other things, masonry work requires more skill and experience than you might think... 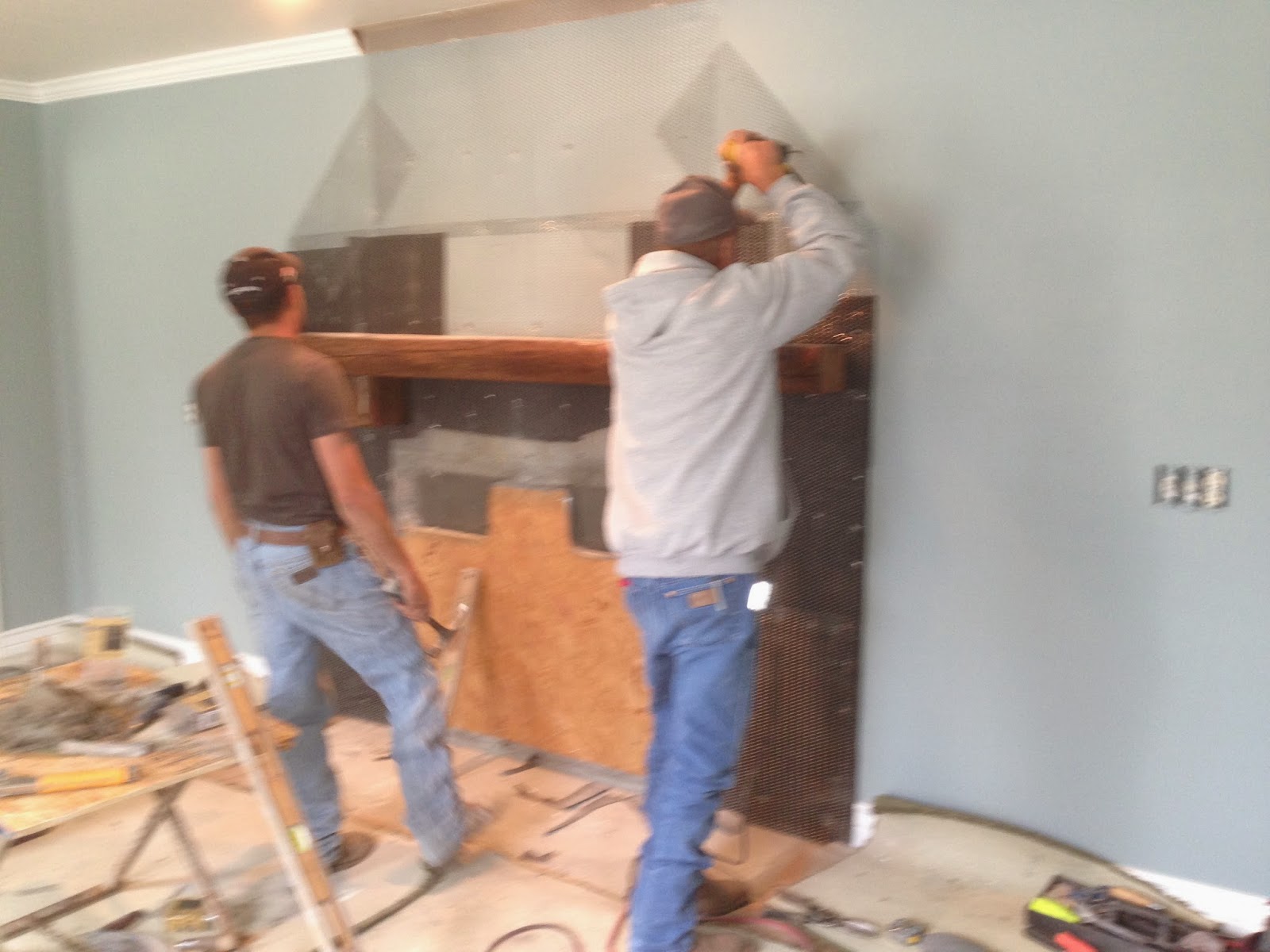 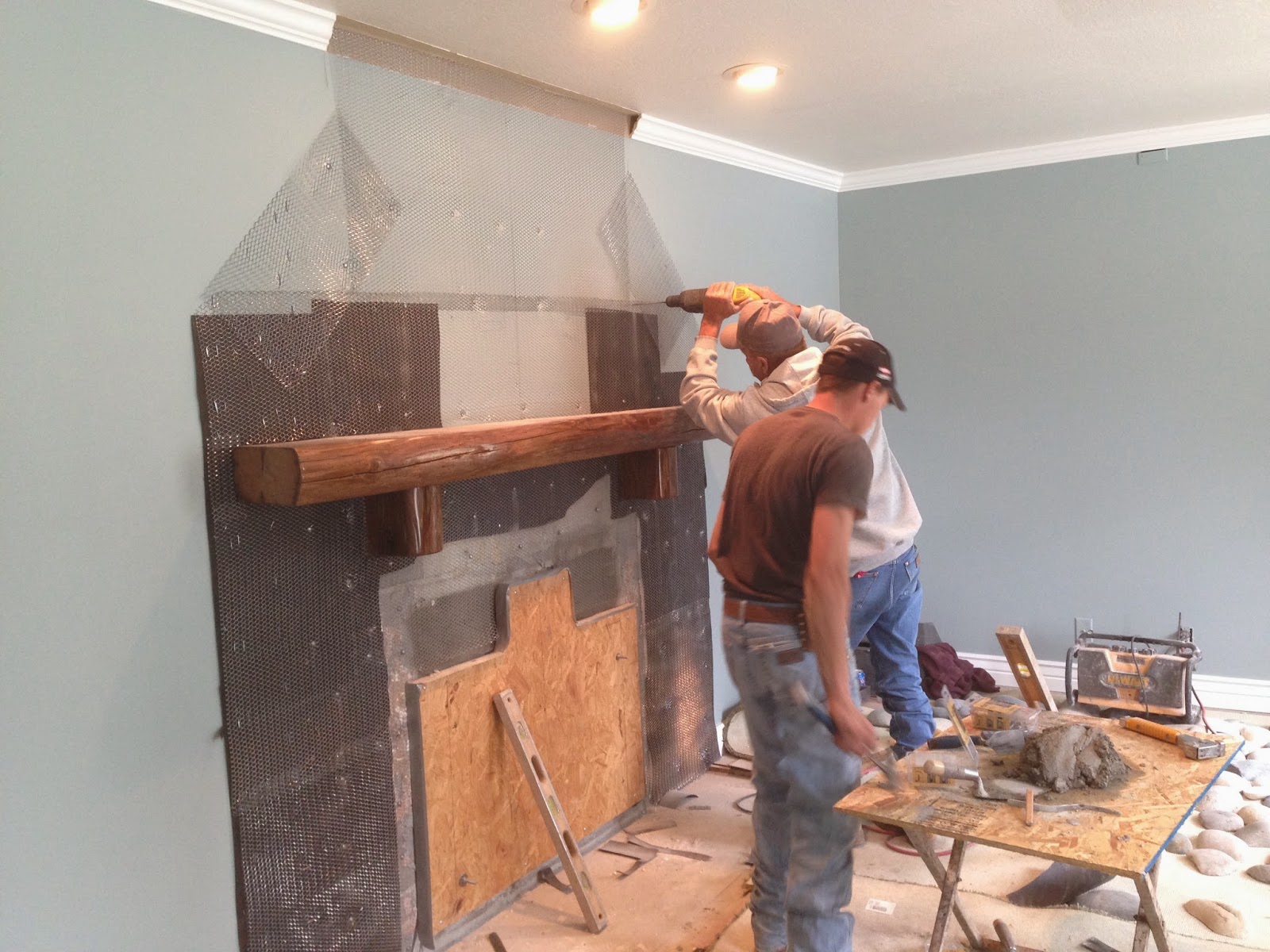 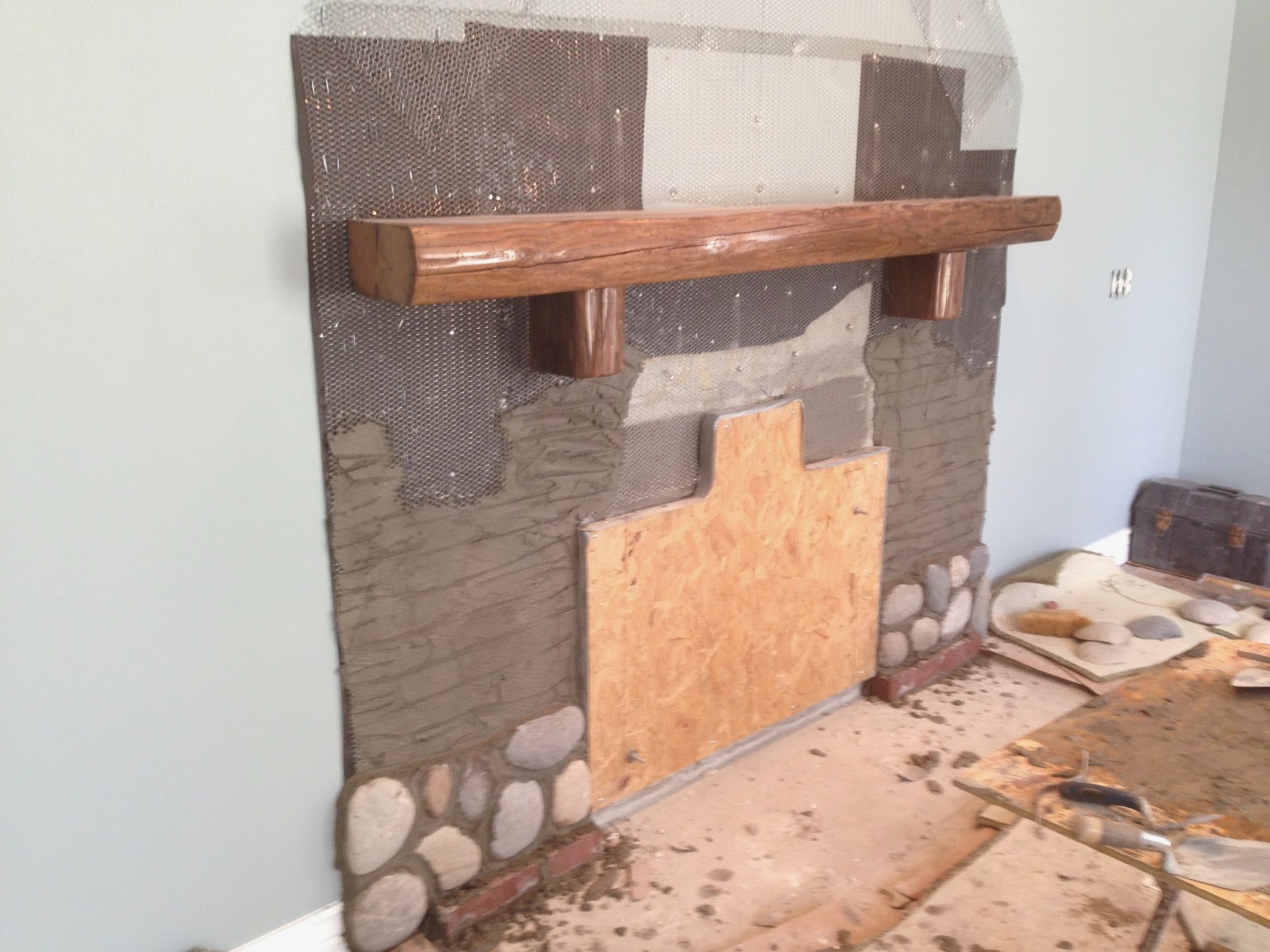 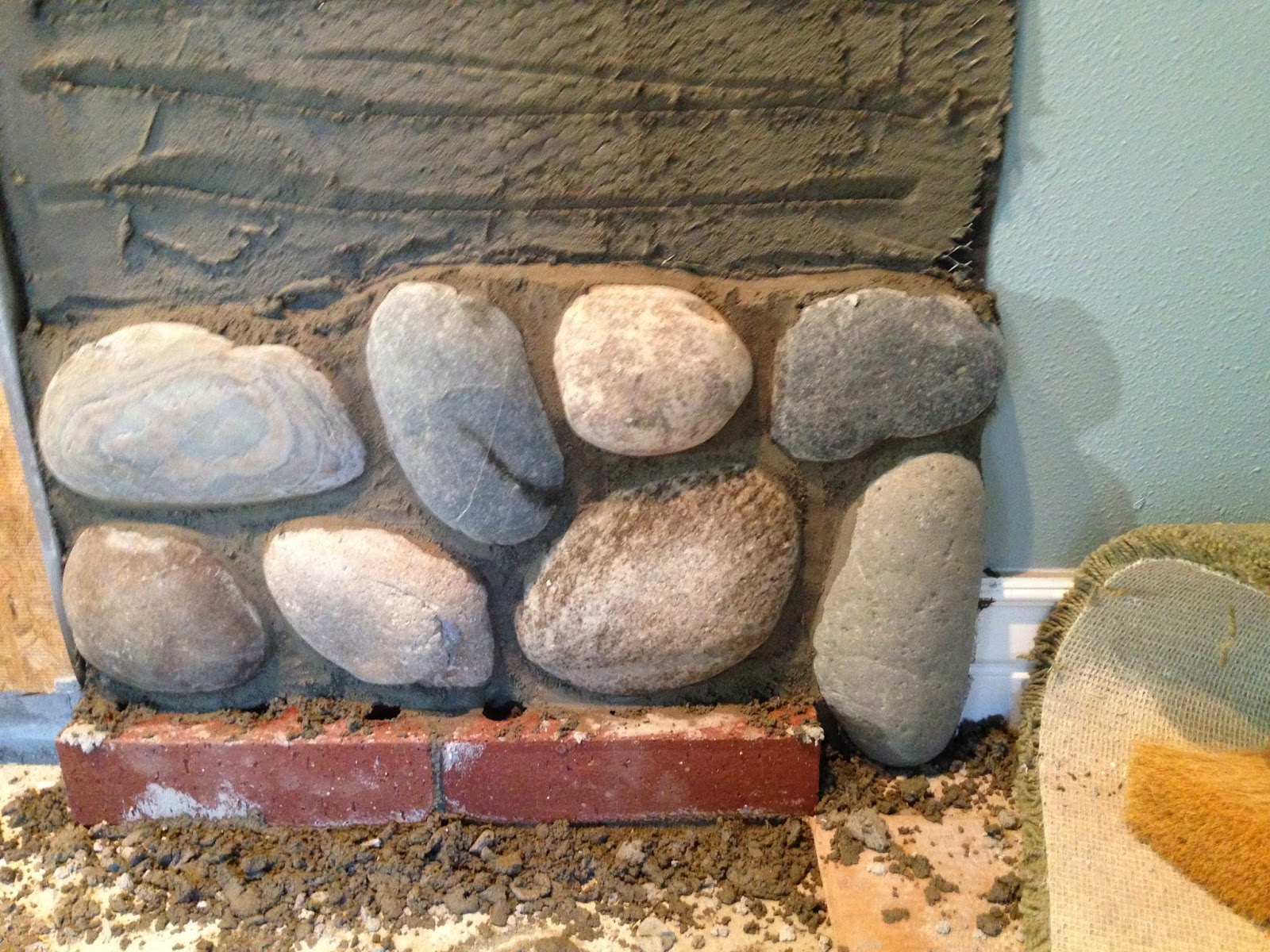 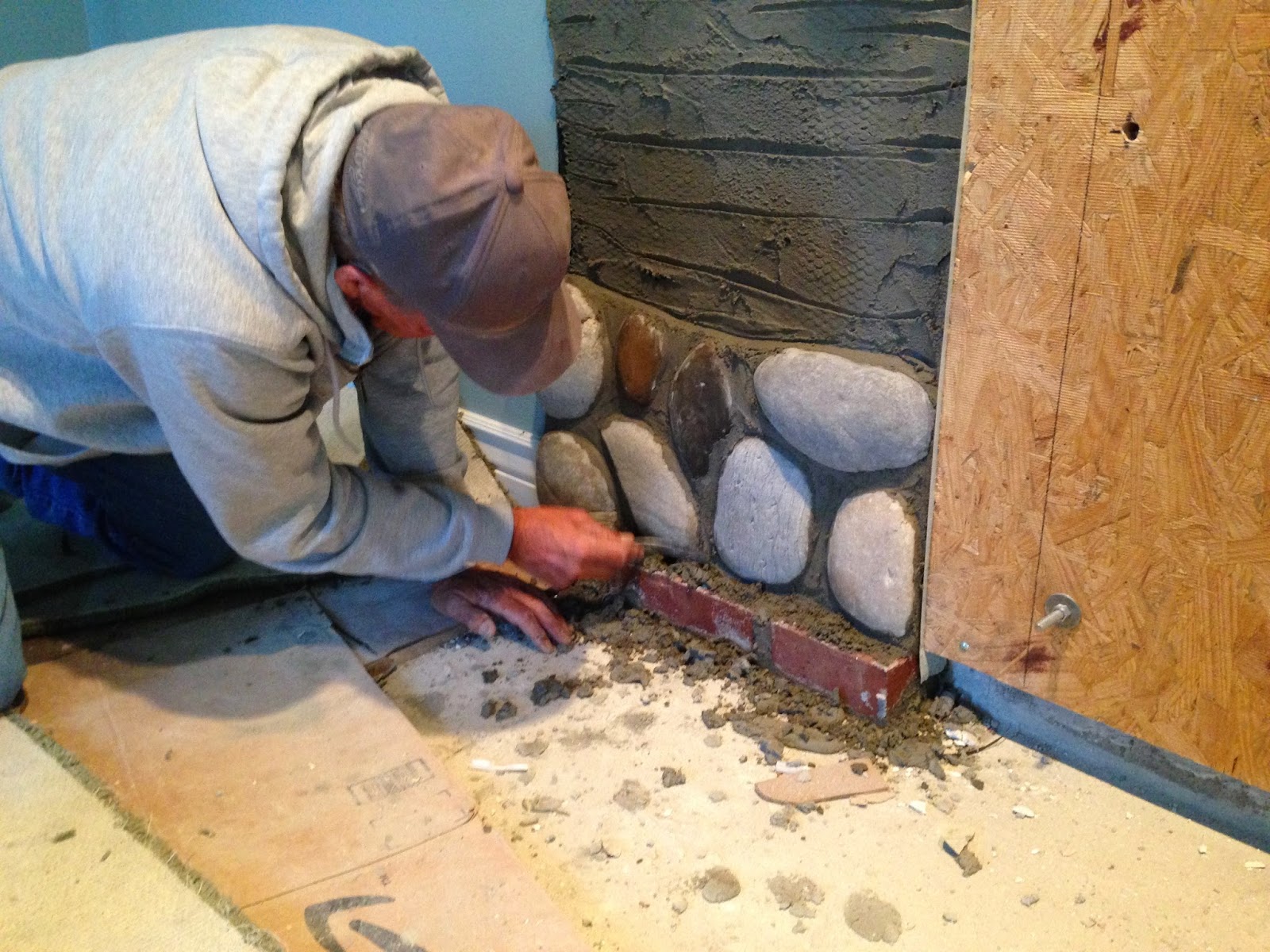 Posted by Unknown at (permalink) 5:39 PM No comments:

“That’s a lot of nonsense to pack into one paragraph.”

“That’s a lot of nonsense to pack into one paragraph.”  I read Foer's piece on the need to stop Amazon, and I had several simultaneous urges: to beat my head against a concrete wall, to smack him upside the head with a nice hard object (a sledge hammer would do nicely), and to write a rebuttal of it.  The latter seemed a bit overwhelming, as there was so much that needed rebutting.  But now I see that David Post has saved me the work, by doing a fine job himself.  The leading quote is from his piece...
Posted by Unknown at (permalink) 3:48 PM No comments: 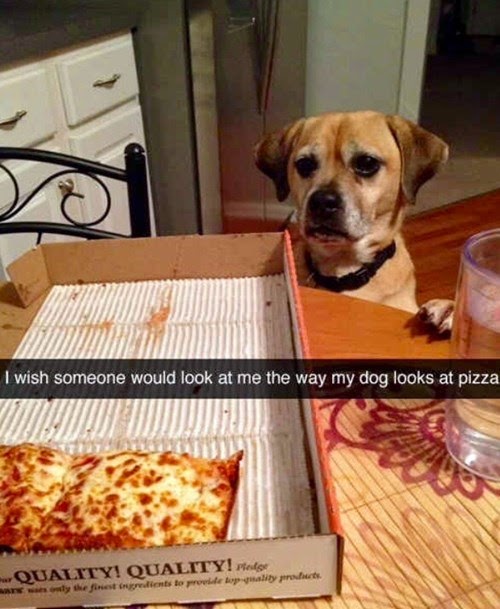 Posted by Unknown at (permalink) 3:44 PM No comments:

Microscopy...  The first photo below shows a piece of our fireplace river rock, at 40x.  The second is a 60x closeup of a detail on my tungsten carbide wedding band.  I'm surprised how beat up the surface of the ring looks in the microscope – to my eye, it looks like a perfect mirror! 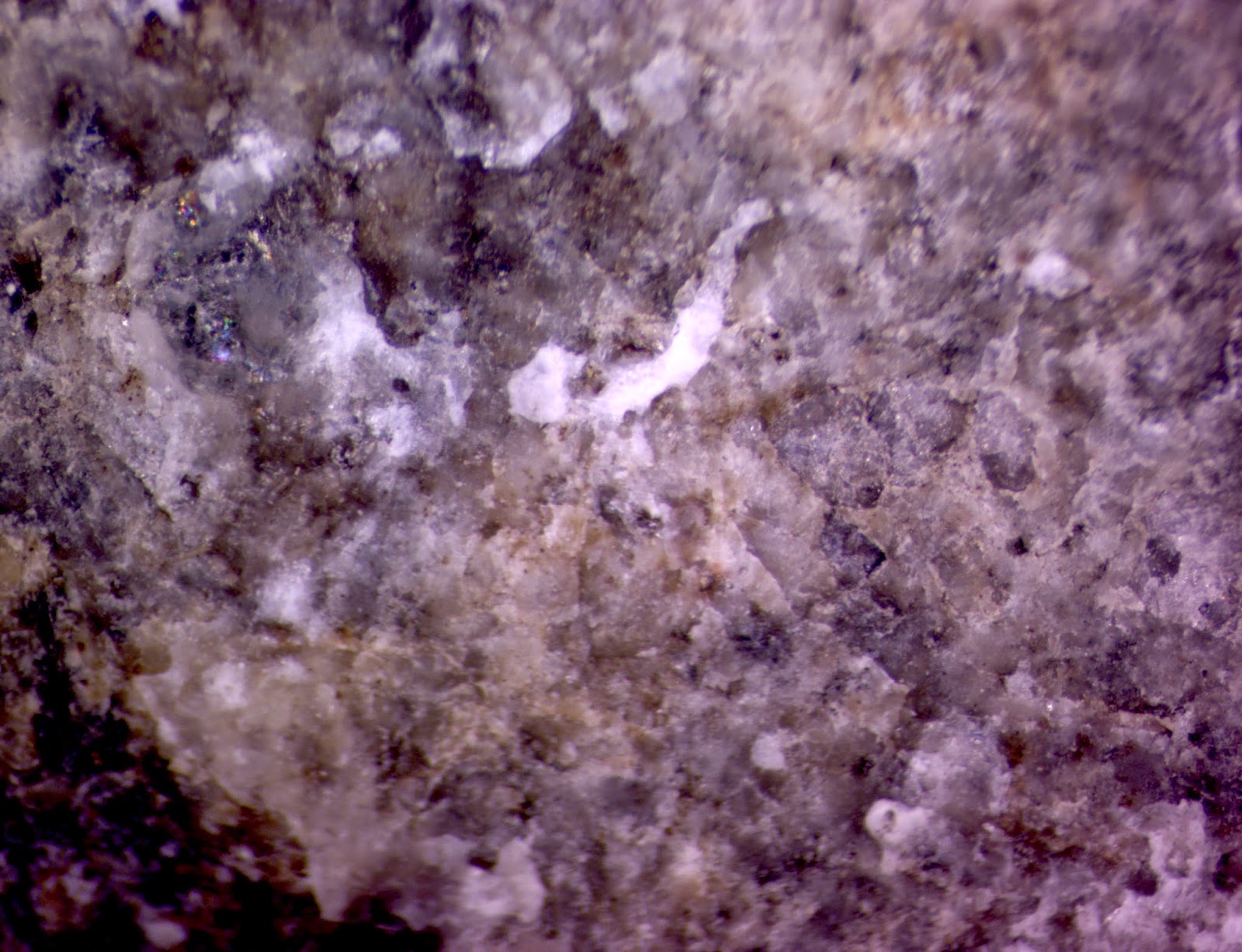 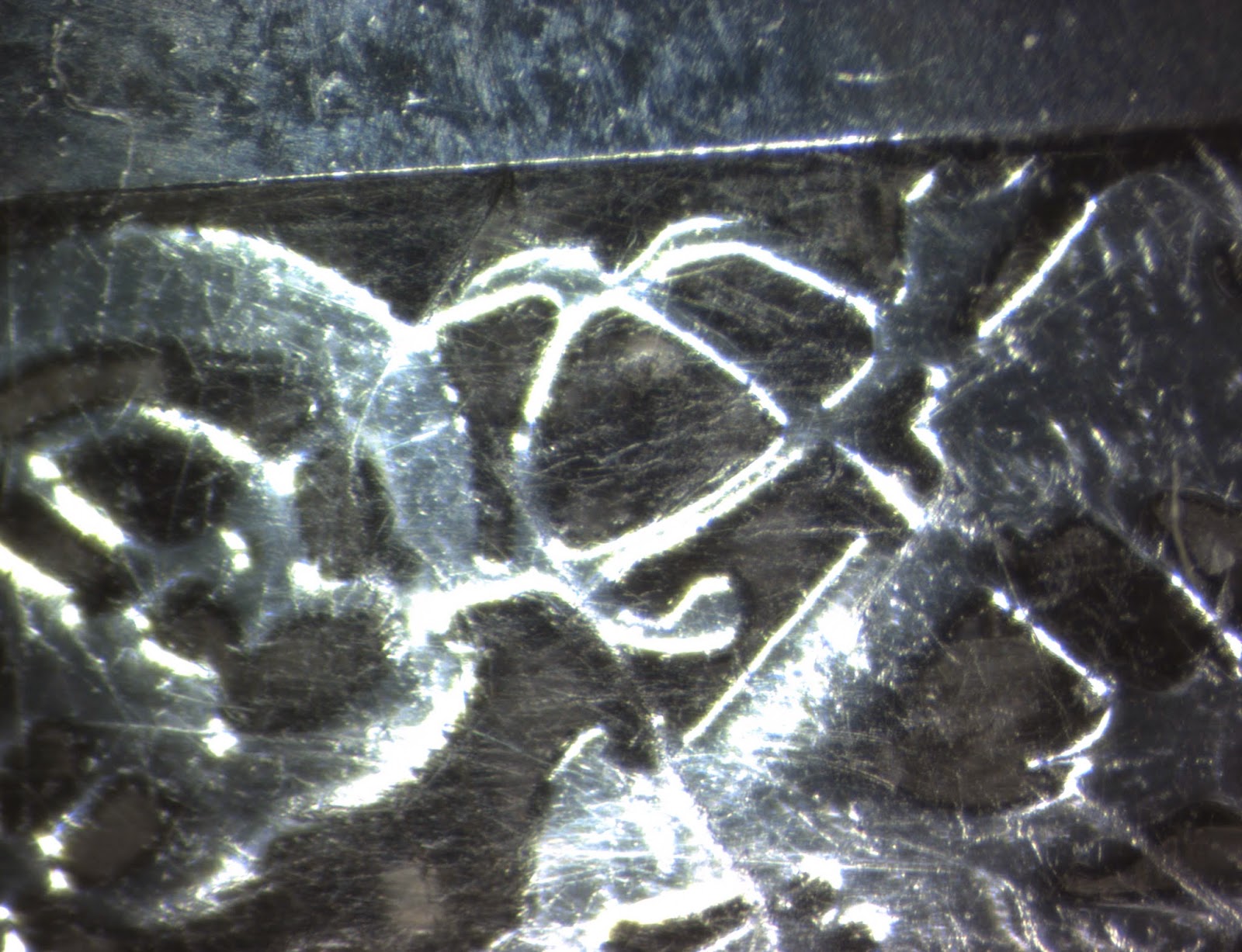 U.S. Marines vs. ROK...  The Marines overran the ROK forces, and used their own drums against them.  This is a good-natured and enthusiastic competition between the percussion sections of their marching bands.  Via friend, reader, former colleague, and Idaho mogul-of-everything Doug S...
Posted by Unknown at (permalink) 6:49 AM No comments:

The new fireplace is underway...

The new fireplace is underway...  On Monday a truck pulled up with the thin veneer river rock I'd ordered from Portland, Oregon.  It was a week late, but the product was beautiful.  Yesterday the mason who's building my fireplace started the work.

The first step was to clean the incredibly dusty pieces of rock.  They were dusty from the sawing operation, which uses saw blades with very fine pieces of diamond in them.  The “rock dust” that results is incredibly fine – it makes talcum powder feel coarse.  This dust had penetrated every tiny little nook and cranny in the surface of the rock.  The masons first washed all the rocks with a 3,200 PSI pressure washer.  Then they scrubbed them with dilute acid, and pressure washed them one more time.  The result was almost miraculously different than what they started with (see first photo below).

Then they brought all the stone inside and laid it out on our living room floor (see second photo below).  This is so they have a “palette” of stone to choose from as they build the fireplace.

Then they tackled the wall.  The big job here was to clean off the remnants of the three separate iterations of fireplace that were here before.  It started off in 1992 as a brick fireplace, then became a manufactured stone facade fireplace, and then a slate facade fireplace.  We're replacing the slate version with this river rock. 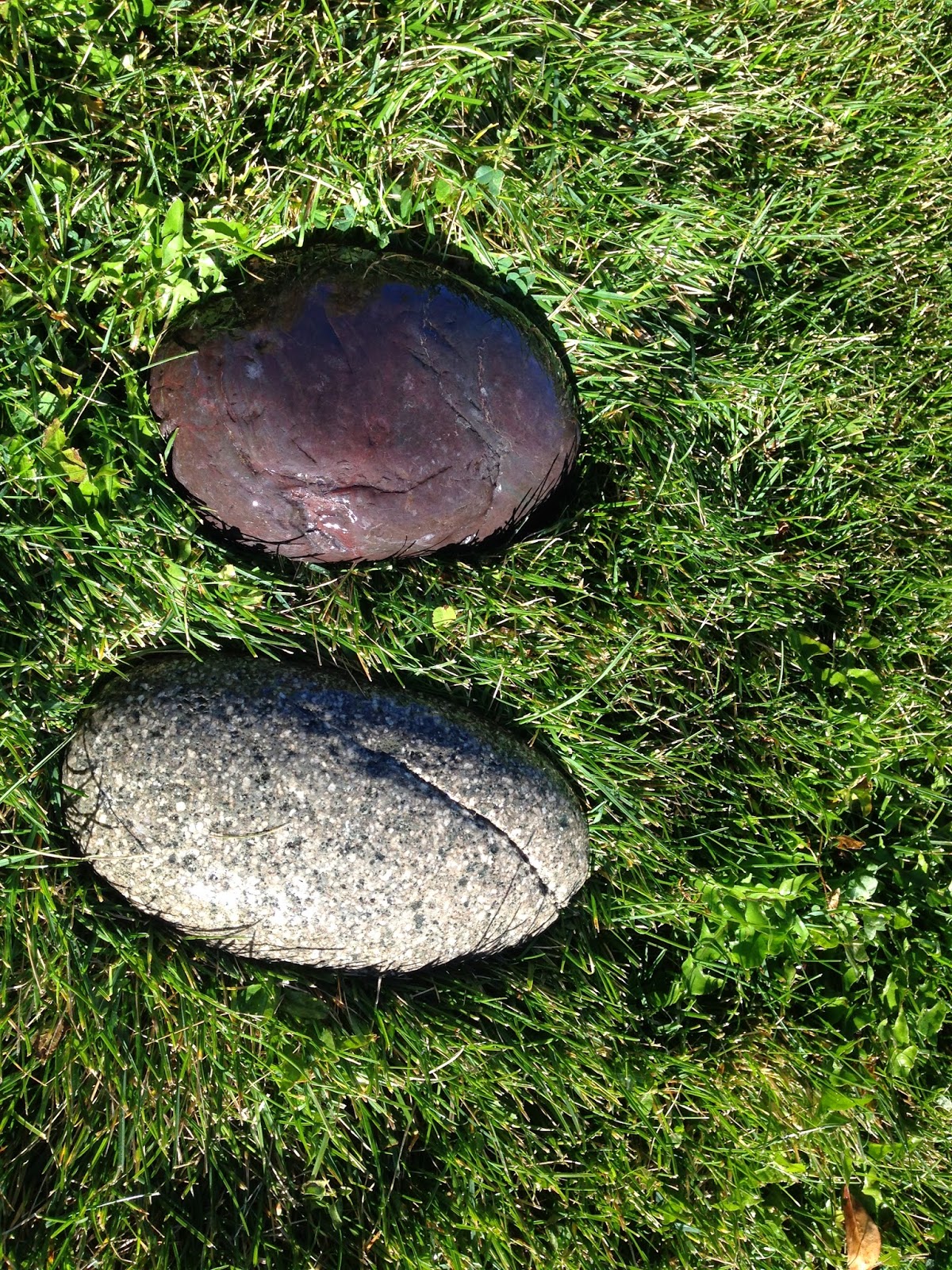 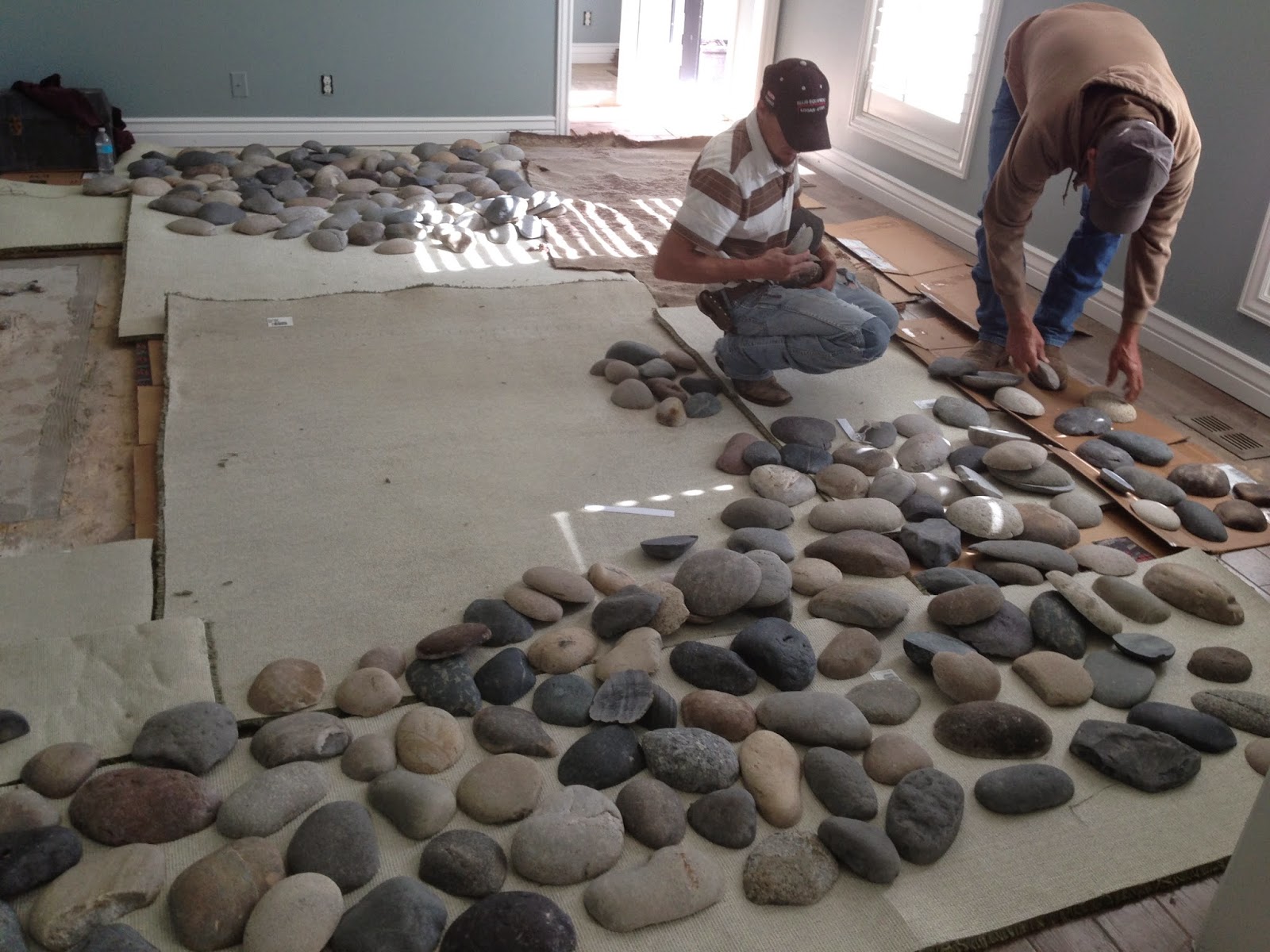 “...like a conservative’s hallucinogenic fever-dream of cultural life in Manhattan.”

“...like a conservative’s hallucinogenic fever-dream of cultural life in Manhattan.”  That's a line from one of the funniest things I've read in a long time – and it's a review of a production (by Kevin D. Williamson) of Shakespeare's The Winter's Tale.  How I, of all people, came to be reading that is a funny story itself, which I'll likely tell some other time.  I'm glad I did, though, because otherwise I'd have missed this:


Which brings us, strangely enough, to the recent performance of The Winter’s Tale, or something purporting to be The Winter’s Tale, staged by Public Works, a sub-fiefdom of the Public Theater’s inexplicably beloved annual outdoor program at the Delacorte Theater in Central Park. Far from speaking truth to power, the Public Theater has demurely presented power with its hindquarters like a rutting and not particularly choosy she-baboon. To endure it is to take a guided tour of everything that is low-minded, banal, cowardly, and loathsome about American theater.

To say that The Winter’s Tale is the worst thing I ever have seen staged would be an understatement. It represents nothing less than the complete abandonment of artistic and intellectual standards—to say nothing of self-respect—and what may as well be the last word in the degradation of theater and its reduction into a branch of politics. Every professional involved with this supine display of sycophancy should, after a thorough examination of conscience, go into retirement, or else be forcibly driven to it. No reputation should survive.

To think that I thought that the artful insult was dead!  There's more, much more, including the use of the unlikely phrase “Muppet kung-fu stilt-band circus”.  Read the whole thing.
Posted by Unknown at (permalink) 5:49 AM No comments:

Schrodinbug...  That's a new word for me, learned when I read this article.  I've run across a few schrodinbugs myself over the years, far too often for their existence to be merely chance or coincidence.  In at least a couple of cases, I was able to track down the authors (there always seem to be two :) – and I discovered that one bug predated the other, and the later bug was deliberately created to compensate for the first bug.  There are lots of scenarios where the foibles of the ordinary humans who write software would cause this.  For instance, suppose a very senior, well-respected engineer accidentally created a bug like the one described in the article.  Then one could imagine a very junior, timid engineer trying to use that code, running into the bug, and then either assuming that the first guy must be right, or simply being afraid to approach that first engineer.  The natural result of that would be to write the compensating “counter-bug” to get the correct result despite having two bugs.  In one of the cases where I talked with the authors, I'm pretty sure that's exactly what happened.

Something I've seen much more often than straightforward, provable code schrodinbugs are what I'll call “architecture schrodinbugs”.  For example, suppose an engineer implements a working, but poorly designed API (this is so common one could consider it to be the norm!).  After that, there may be many programmers who write contorted code that uses that API – in effect, every one of them is a counter-bug, and the pair of the crappy API and the resulting twisted client is an architectural schrodinbug.  They're also how most software is built :)
Posted by Unknown at (permalink) 5:35 AM No comments:

Big data you can use...  I just ran across the web site CamelCamelCamel for the first time.  After just a few minutes perusing its features, I can tell I'm going to be using it often.

CamelCamelCamel does something that sounds simple enough: for any product on Amazon, it tells you the price history – and will send you alerts when the price of a product you're interested in drops below a value you set.  To do this, CamelCamelCamel had to collect a lot of data.  The products that I looked at this morning had price history going back as much as several years, as well as comparisons to third-party (e.g., not Amazon) vendors.  I'm kind of fanatical about getting the products I want at the best price I can while still getting acceptable levels of customer service.  CamelCamelCamel looks like a huge time saver for me when I'm considering products whose prices I'm not that familiar with...
Posted by Unknown at (permalink) 5:24 AM No comments: