I remember visiting a small town in Russia in 1995, where the young clerk in a bakery got out her abacus to figure out the total and give us change. I marveled at the time that almost nobody in the USA could have done that even with a calculator. It's probably worse today.

I had a similar experience in Estonia, a year or two earlier.  I was driving in a fairly remote area near the town of Soe, just west of the lake Võrtsjärve, in farm country.  At a crossroads there was a little store, where I bought some food for my picnic lunch on the shoreline.  The clerk in that store used an abacus to total up my order and to calculate the VAT on a little handmade wooden box I also bought.  At the time I had no idea how to use an abacus, nor did I know that there are several kinds of abaci.  I've since learned how to use a Chinese abacus, but the Russian variety I still don't know much about.  The clerk's abacus was quite crude – roughly turned wooden beads strung on pieces of rusty wire in a heavy, primitive-looking frame...
Posted by Unknown at (permalink) 9:25 AM No comments:

Curiosity is looking ... at some weird Martian rocks...
Posted by Unknown at (permalink) 9:11 AM No comments:

Weird red “graffiti” on Tethys...  Nobody knows what they are...
Posted by Unknown at (permalink) 9:06 AM No comments:

The government ... needs to be afraid of its citizens – not the other damned way around!
Posted by Unknown at (permalink) 9:03 AM No comments:

The geography of vulgarity...

The geography of vulgarity...  I didn't expect there to be this much variation based on location, or on the particular word.  Also surprising: not a lot of correlation between various words.  Lots more here...
Posted by Unknown at (permalink) 7:18 AM No comments: 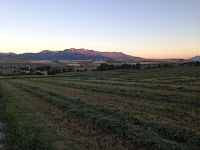 Progress in Paradise...  I got up this morning at 4, poked my head outside and saw a gorgeous full moon about to set behind the Wellsville Mountains to our west.  After I had my tea, the three of us (Mike, Race, and I) took off on our usual morning walk, well before sunrise.  In fact, it wasn't until we were almost done with our walk that the first rays of sunlight struck Logan Peak (the tallest mountain in the photo).  In the dim light we could just barely make out Mike C. pulling a rake with his tractor, turning over the windrows on his second cutting for the year.  We talked for a bit; he started at 3 am, driving with headlights, as he needs to turn over 1,200 acres of alfalfa hay today...

Yesterday I got a coat of primer on the top side of the trailer; I'll get the first topcoat on today.  I also moved a rather large pile of junk lumber – the detritus from the old greenhouse and outbuilding we've torn down, plus the remains of the pallets and crates our large shipments arrived in.  The pile was about 15 feet in diameter and 8 feet tall, just randomly thrown on the pile.  It was near our entrance – ugly, and preventing me from getting to some weeds that need mowing.  I moved it all to the back of our property, next to our brush pile.  That took six tractor loads in all.  Whew!  Glad to have that done.  Today I'll take a whack at those weeds...

Yesterday I also had a day of training for Michelle H., the wonderful lady who cleans our house.  I'm training her to take care of the animals while I'm away visiting with my family in Virginia.  This is all new to her, but not intimidating at all.  Michelle has eight kids; she's seen it all.  Animal messes are nothing compared to what her kids have done :)
Posted by Unknown at (permalink) 7:13 AM No comments: 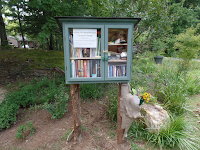 Neighborhood library box...  My brother-in-law Warren (my sister Holly's husband) built the neighborhood library box at right, which is mounted on their property in Charlottesville, Virginia.  This is something Holly has wanted for a long time.  She blogged about it here, and posted some more photos here.

I love the idea of sharing and swapping things, including books.  That kind of sharing, along with shared effort, is to me a measure of just how real a community is.  It's the essence of neighborliness.  It's one of the things I like most about northern Utah, where we live now – it's just chock full of this sort of sharing.  It's fairly common here for locally-owned businesses to have small sharing libraries like this.

The focus on books is interesting to me for a completely different reason.  I'm fascinated by the technological impact on paper-based books.  Most of my family are still confirmed paper book readers.

Debbie and I are almost completely the opposite – it's actually quite rare for us to pick up a paper-based book, or magazine.  On the other hand, I carry around just over 1,000 books on my iPad, two-thirds of which I haven't yet read.  Many of these are downloaded from Project Gutenberg (free), which now has close to 50,000 titles in its inventory.  A couple hundred are purchases.  A few dozen are reference works.  I've gotten to the point where the combination of useful features (such as search, dictionary lookup), price, excellent readers, capacity (1,000 books in my hand!), and device independence (I can read any of those books on my computer, my iPad, my iPhone, or my Kindle) has completely hooked me on electronic books.  I have gotten to the point where I will only reluctantly purchase a paper book – and only if it is impossible to obtain electronically.

I know many people, members of my family included, who have an almost romantic attachment to the idea of paper-based books.  They freely express sorrow at the thought of paper-based books disappearing, citing things like the feel of turning a page, the smell of a leather binding, etc.  This strikes me as very similar to the paeans I've read about horse-drawn carriages that were written in the early 20th century, when automobiles started to to gain acceptance.  Now horse-drawn carriages are tourist attractions, rare, and carry an aura of romance about them.  People don't have them in their homes, though.  Maybe a slightly better comparison might be kerosene lamps.  I'm not sure their replacement with electric lights was lamented by anyone at the time (though I certainly wouldn't be surprised to find that was so).  Today, though, the people who do have one at home have them because they evoke earlier, simpler times.  I doubt they are often actually used by the people who own them; they're mainly mementos on a shelf.  I suspect that paper-based books are headed the same way, and rather more quickly that most people suspect.

The publishing industry is in the midst of a revolution, one that is enabled by the incredibly low costs of self-publishing for electronic books.  Last year for the very first time more authors of self-published books were able to make their living by writing than authors of traditionally published books.  Next year Amazon expects that number to double.  In a few years, authors making a living at writing will be predominantly self-published, and that will change everything about publishing.  The marketing that traditional publishers do is being replaced – fast – by social media.  The distribution and production of traditional publishers is irrelevant for electronic books.  I don't know (nor does anyone else) what publishing will end up looking like – all I know is that it won't be what we have today.  We're at the cusp of an inflection point on this right now – things are going to happen fast over the next few years!
Posted by Unknown at (permalink) 4:53 AM No comments: