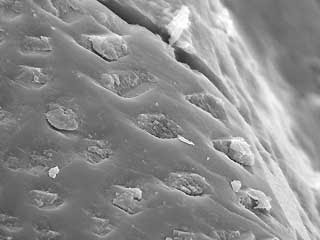 NASA scientists are back with a new analysis of the meteorite originally from Mars discovered back in 1996 that they believed showed evidence of fossilized bacteria-like life.  The new analysis, using newly-available technology, shows that alternative explanations involving chemical processes are not likely explanations.  This leaves fossilized living creatures as the only explanation still standing.

This won't close the case for science.  There will have to be much more evidence for living creatures on Mars before it becomes a generally accepted notion.  But if life did in fact exist on Mars (and possibly still does today), then this leads naturally to a couple of very intriguing lines of thought.  First, that possibly life is far more common than we have heretofore believed (if it arose independently on two planets in a single star system, then surely it will have arisen commonly in other star systems).  Second, that possibly life has been “seeded” by something completely outside our star system – perhaps something as simple as chirally-sorted amino acids being distributed by junk floating around in space, or cosmic rays turning out to be the key to amino acid formation.  And of course that latter line of thought will lead some to immediately assume intervention by alien civilizations or deities...
Posted by Unknown at (permalink) 4:31 AM No comments:

Longtime readers of this blog know that I have long believed that the corrupt behavior of leading AGW scientists was most likely caused by the pursuit of money – grant money, that is.  You'd have to be an idiot not to notice that the more AGW controversy there was, the more grant money magically appeared.

The WSJ is now taking up that notion:


Consider the case of Phil Jones, the director of the CRU and the man at the heart of climategate. According to one of the documents hacked from his center, between 2000 and 2006 Mr. Jones was the recipient (or co-recipient) of some $19 million worth of research grants, a sixfold increase over what he'd been awarded in the 1990s.

Why did the money pour in so quickly? Because the climate alarm kept ringing so loudly: The louder the alarm, the greater the sums. And who better to ring it than people like Mr. Jones, one of its likeliest beneficiaries?

Thus, the European Commission's most recent appropriation for climate research comes to nearly $3 billion, and that's not counting funds from the EU's member governments. In the U.S., the House intends to spend $1.3 billion on NASA's climate efforts, $400 million on NOAA's, and another $300 million for the National Science Foundation. The states also have a piece of the action, with California—apparently not feeling bankrupt enough—devoting $600 million to their own climate initiative. In Australia, alarmists have their own Department of Climate Change at their funding disposal.

And all this is only a fraction of the $94 billion that HSBC Bank estimates has been spent globally this year on what it calls "green stimulus"—largely ethanol and other alternative energy schemes—of the kind from which Al Gore and his partners at Kleiner Perkins hope to profit handsomely.


While I am totally disgusted and disappointed by the revealed behavior in the CRU trove, there is one very good thing resulting from this: it's going to be very hard for corrupt science to prevail in the AGW debate going forward...
Posted by Unknown at (permalink) 4:20 AM No comments:

ClimateGate: The Sound of Falling Scales...

Clive Crook writes at The Atlantic, and has written dismissively of AGW skeptics in the past.  Now he's read through the ClimateGate data dump, and comes to another conclusion:


Remember that this is not an academic exercise. We contemplate outlays of trillions of dollars to fix this supposed problem. Can I read these emails and feel that the scientists involved deserve to be trusted? No, I cannot. These people are willing to subvert the very methods--notably, peer review--that underwrite the integrity of their discipline. Is this really business as usual in science these days? If it is, we should demand higher standards--at least whenever "the science" calls for a wholesale transformation of the world economy. And maybe some independent oversight to go along with the higher standards.

The IPCC process needs to be fixed, as a matter of the greatest urgency. Read David Henderson or the Wegman report to see how. And in the meantime, let's have some independent inquiries into what has been going on.

Good.
Posted by Unknown at (permalink) 3:51 AM No comments:

Richard Lindzen, a prominent AGW skeptic whose writing we've quoted before, has an excellent piece in the WSJ today.  In particular, Lindzen does a good job with a piece of the AGW puzzle that most people don't understand – the models' reliance on positive feedback systems to predict much higher temperatures and sea levels in the future:


The notion that the earth's climate is dominated by positive feedbacks is intuitively implausible, and the history of the earth's climate offers some guidance on this matter. About 2.5 billion years ago, the sun was 20%-30% less bright than now (compare this with the 2% perturbation that a doubling of CO2 would produce), and yet the evidence is that the oceans were unfrozen at the time, and that temperatures might not have been very different from today's. Carl Sagan in the 1970s referred to this as the "Early Faint Sun Paradox."

For more than 30 years there have been attempts to resolve the paradox with greenhouse gases. Some have suggested CO2—but the amount needed was thousands of times greater than present levels and incompatible with geological evidence. Methane also proved unlikely. It turns out that increased thin cirrus cloud coverage in the tropics readily resolves the paradox—but only if the clouds constitute a negative feedback. In present terms this means that they would diminish rather than enhance the impact of CO2.

There are quite a few papers in the literature that also point to the absence of positive feedbacks. The implied low sensitivity is entirely compatible with the small warming that has been observed. So how do models with high sensitivity manage to simulate the currently small response to a forcing that is almost as large as a doubling of CO2? Jeff Kiehl notes in a 2007 article from the National Center for Atmospheric Research, the models use another quantity that the IPCC lists as poorly known (namely aerosols) to arbitrarily cancel as much greenhouse warming as needed to match the data, with each model choosing a different degree of cancellation according to the sensitivity of that model.


Many observers, including me, have pointed out that Mother Nature seems to abhor positive feedback systems – they very rarely occur, and where they do, the lifetime of the affected system is very short.  The Earth has been around for something like 4 billion years; if a positive feedback system actually existed in our climate, common sense says it would have led to a horrible result long before now – such as during one of the many past periods when carbon dioxide levels were much higher than they are now...
Posted by Unknown at (permalink) 3:46 AM No comments: