Paradise ponders: monetary disappointment, another hole-digger and glue on the stairs edition... 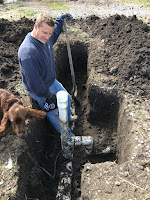 Paradise ponders: monetary disappointment, another hole-digger and glue on the stairs edition...  The fellow at right (Dave) is standing in a hole that he dug in our back yard this morning.  Dave works for Mark T., the contractor who's working on getting sprinklers installed into my yard.  His day job is professor of political science at Utah State University, but when he's not teaching he's working for Mark doing much less frustrating work. :)  He waxes poetic about the joys of digging holes, which instantly reminded me of my dad (as it would anyone who knew him) – for my dad's “hobby” (as we liked to tease him) was digging holes.  As with Dave, the bigger the better.

Dave made an unexpected discovery upon digging this hole.  What he expected to find was an elbow on a 6" diameter irrigation water line.  The plan was to cut the line here, tap into the source side for the water for our new sprinkler system, and use the other side as a tunnel underneath our driveway (for a 4" pipe for the new sprinklers, plus a bunch of control wires).  But he didn't find that elbow.  Instead, he found a 3" diameter pipe for the source of the irrigation water, connecting into a 6" pipe that runs a quarter mile south of there.  With some more work, we figured out that whoever installed this system connected from one 6" main through a 50' long piece of 3" pipe into the second 6" diameter main.  That's like having an interstate highway with a few miles of one-lane country road in the middle of it!  None of us can imagine any good reason for doing this.  I shouldn't be surprised any longer at the crazy things the previous owner did, but this one probably is the new one for top billing... 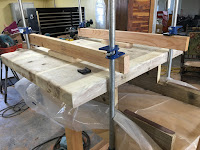 This morning I rinsed the sodium hydroxide and hydrogen peroxide residue from the wood I bleached yesterday.  That took a lot of elbow grease, but the result was worth it.  That bleach really works well!  Then early this afternoon I enlisted our friend Michelle H. to help me glue up the ribs and the landing board.  The photo at right shows that assembly in clamps.  When I made that landing, I glued it up with a (very) slight bow in it, so that the center was slightly higher than the ends.  That allowed me to use the simple clamping arrangement you see here, with the blocks in the middle pressed down by a pair of clamps on a board.  The result is a nice flat surface as the clamp presses the landing board down onto the flat surface of the ribs.  I've had better results with a center clamp like this than with either a perfectly flat board or a bowed board the other way – I'm pretty sure that's because of the single clamp in the center, as you see here.

A couple of months ago, I posted about a book I'd read about: The End of Error, by John Gustafson.  I've finished it now, and I have to say I'm a bit disappointed.  My biggest hope is that he'd devised a good way to implement floating point arithmetic such that it could (practically) be used to represent money.  I judge that he failed to reach that lofty goal.  He did, however, have a few ideas that I really like.  One of them is the notion of using a bit to specify whether the floating point number is exact or an approximation.  That's a valuable piece of information when you're dealing with money.  Unfortunately, he specifies the approximations as truncations of the actual value – whereas for money you would want the rounded approximation.  Another very interesting idea is the notion of allowing encodings where the precision is specified as part of each number.  That would allow much more compact encodings on average in most applications, assuming you don't actually need a fixed length.  Those are a couple of great ideas that could be incorporated in a pragmatic money representation.  Yet another idea is to associate a context with computation and encodings of numbers in a particular usage – particularly powerful for allowing variable precision for different needs.

The next version of Java is likely to have a better money representation, but what I've read suggests that it will simply be an amalgamation of BigDecimal and Currency.  These are existing classes with much less than ideal characteristics for a general-purpose representation of monetary values.  It amazes me that after over 20 years of use in business applications, Java still does not have support for a pragmatic representation of money...
Posted by Unknown at (permalink) 3:30 PM No comments:


Posted by Unknown at (permalink) 7:57 AM No comments:

A favorite branch...  This is from Botany Photo of the Day, by Daniel Mosquin.  Beautiful, it is.  You can sign up for this free email here, where you can also read more about this Magnolia sargentiana...

Paradise ponders, despondent border collie edition...  It's a beautiful morning here in Paradise: scattered clouds in a blue, blue sky, snow-capped mountains all lit up around us, long shadows on the greening valley floor.  It's the kind of a morning that makes us say that we live in a postcard.  For my younger readers, here's what a postcard is.  The photo at right is someone else's photo from an actual postcard of Cache Valley (where we live).

This morning I fed our four dogs, as always.  From their behavior you'd think we starved them for weeks in between feedings. :)  I feed them in a particular order: Cabo, Mako, Miki, Race, as once they've learned the order they all behave better.  If I feed them in random order, they'll all squabble for the right to be first.  Because poor well-behaved Race is at the end of the line, he gets to watch me feed three other dogs before it's finally his turn.  At that point he's always a drooling bucket of despondency.  Even worse, from his perspective, is that I always make him sit and stay while I put the food bowl down (to protect my hands from accidental injury when he attacks the bowl).  He can't eat until I release him from the stay.  The first photo below is what he looks like every morning after I put the food bowl down while he's still in a stay.  He's totally focused on my lips, waiting for the word “okay” to come out.  He's also drooling about 4 gallons/minute.  The second photo I took approximately 3 picoseconds after uttering that “okay”.  About a third of the food is already in his stomach. :) 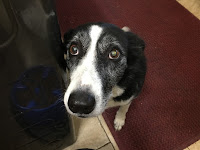 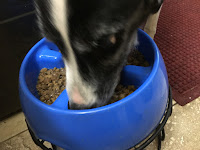