Japanese tea garden ... in San Francisco's Golden Gate Park.  It's the oldest Japanese garden in the U.S., dating from 1894.  I visited this park several times in the early '70s, when I was in the U.S. Navy, stationed at Mare Island, across the San Francisco Bay in Vallejo.  After my first visit there, I made a point of getting there early in the morning, before it got to crowded.  It is a beautiful spot to sit and read, think, or just to be at peace.  I'd love to visit there again someday, except that it's in San Francisco...
Posted by Unknown at (permalink) 9:50 AM No comments:

Paradise ponders...  Today is the great “wire up the generators” day.  We'll be without power for a few hours while they're connecting in the ATS (Automatic Transfer Switch), so posting will be limited.

We (Miki, Race, and I) went for our usual walk this morning.  We flushed a big covey of quail again, possibly the same one as a few days ago.  I took a slightly different route today, but for the dogs I might as well have been miles from their previous explorations – the moment we stepped off our familiar route, those little noses were going a mile a minute, drinking in all the new smells.  The excitement level was high, and the two of them would smell each pungent spot that either of them discovered.  Tails were wagging just as fast as the noses were going :)

Some photos of today's walk below.  In the third one from the end you can see what just might be the last sunflower in Cache Valley – I found it along the new route we took today. 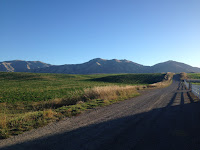 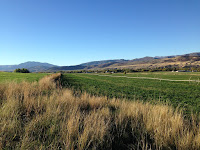 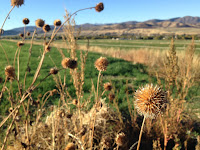 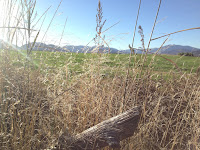 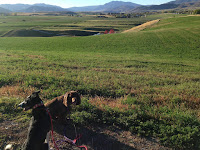 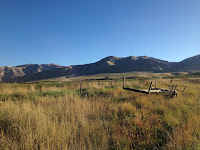 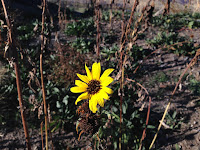 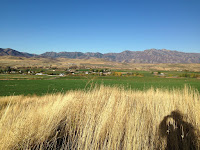 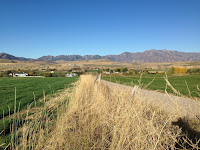 Yesterday afternoon I did something a little different: I assembled and installed the pickup rack that had just arrived.  The completed project can be seen in the two photos below.  I just plain forgot to take photos in progress, and dang it – there was an interesting moment in there. 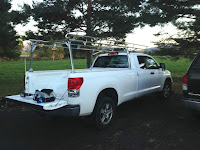 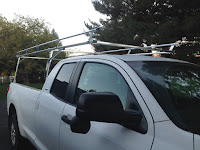 I did most of the assembly on our lawn, ending up with this large aluminum structure that was nevertheless well within my ability to lift.  There was one slight problem, however: the point where I needed to stand in order to lift it in a balanced way (in other words, the center of mass) was nowhere near anything I could reach!  The assembly instructions are very clear that you shouldn't attempt to mount it on the truck alone, as any attempt to lift it from a corner or end would tend to twist the structure unacceptably (it's only resistant to twisting once bolted to the truck).  I called my neighbor, but he wasn't answering his phone – probably out in the boonies hunting.  What to do?  My answer: get the tractor, the universal solver-of-all-problems!  I put the pallet forks on the front loader, positioned the forks over the structure on my lawn, then tied the structure carefully to the forks.  All I had to do then was lift it high in the air, drive (slowly!) to position it over the pickup bed, and lower it a few inches.  It worked like a champ!  I wish now I had a photo or video of that operation, as it was pretty tricky to pull off, requiring some creative rope work and precision tractor driving :)

Once I had it sitting on the bed, the rest of the assembly was easy enough, but tedious.  I had to drill quite a few holes in the truck to bolt it all on, but there wasn't anything particularly difficult about doing this.  The end result of all that work is quite nice – the rack is stiff and strong, looks good, and won't rust.

So why did I want a rack on my truck?  That's part of a much bigger story.  My brother Scott has long wanted to move out to the western part of the U.S., from his current abode in Virginia.  He's a man of modest means, though, so finding a decent, affordable place to live is a challenge.  When I found out that he'd really like to live somewhere in Cache Valley, that hatched a mutually beneficial idea: we could buy a house as an investment, and let him live in it at a reduced rent in exchange for his labor on projects to increase its value.  At the same time, we can make use of Scott's talents in horticulture and artistry around our own home.  He gets a nice place to live, and effectively pays part of the rent with his labor.  We get an investment property, the pleasure of seeing my brother more often, and some free labor to improve both the investment and our own home.  Win!

We found a house last week, a moderate sized log cabin sitting on five acres of land near Newton, Utah – about a 40 minute drive from our home in Paradise.  We're in the process of buying it right now.

But that means Scott needs to move out here.  At the moment he owns three vehicles, not one of which any sane person (that leaves out most of my family, but never mind that) would venture across the U.S. in.  At the moment we also own three vehicles (and we're planning to buy another soon).  The oldest one we own happens to be the white Tundra pickup in the photos above: a 2007 model that has 120,000 miles on it but is in great shape.  Scott is going to inherit that pickup, and I'm going to drive out to Virginia to fetch him.  In Virginia we'll load up his stuff that's worth moving out here, in the pickup and in a trailer we'll be towing.  Among those possessions is a 20' aluminum canoe – hence the rack!  He'll also need the rack while out here, to haul that canoe to the waterways he wants to travel upon.  We're tentatively planning for an early December move, and of course I'll be photo-blogging our adventure.  Since we'll be driving right by my mom's house, we'll be stopping there for a few days as well.

Posted by Unknown at (permalink) 9:05 AM No comments: