A Lovely Evening Drive in the Cuyamacas...

Yesterday evening, just before sunset, Debbie and I took off to do a little wildlife viewing.  We headed for one of our favorite spots: the Stonewall Mine area of Cuyamaca Rancho State Park.  Several times over the past few months we've seen herds of deer up there numbering in the dozens.  This is the first year since the 2007 fires that we've seen the deer in numbers up there, so it's a cheerful sign of recovery for us to see them.

At first we were disappointed.  We got to the little valley adjacent to the mine at just about the perfect time: just as the sun was setting.  We saw one deer, just one.  We did see lots of other things, though – turkeys (a dozen or so), and many other birds of the area.  As we were leaving the Stonewall Mine area, we were just a bit disappointed.

That ended just before we reached the main road (state 79), when Debbie spotted a bobcat.  This was the very first bobcat we've seen in Cuyamaca since the 2007 fires – prior to that, we saw them frequently.  This is another very positive sign of recovery in the area; the bobcats wouldn't return until their prey (rodents, mainly) had returned in numbers.  I had two good 15 second or so sightings with binoculars on it; it looked fit and healthy.  In my first sighting it appeared be stalking something uphill of it; in the second it was just walking along.  We were a bit surprised by its color; more reddish-brown than the bobcats we see around our home, which are overall more grey than brown.  It had the trademark spots and stripes, huge feet, ear tufts, and of course the bobbed tail.  A handsome animal, indeed.

Well, that made our evening!  But there was still more on tap for us.  As we drove home, we decided to make a side trip down Japatul Lane.  This gravel road follows the bottom of a small valley, mostly farmed for forage, where we've seen deer before many times.  It was dusk when we got there, just a half hour or so before dark.  Down in the lowest part of the valley, we ran across a herd of 16 deer, including 5 very young fawns (still in spots).  A mile or so away, we spotted a magnificent 7-point stag.  We were able to park and watch the fawns and their mothers for 20 minutes or so, quite near to us.  We loved seeing those fawns...

What a beautiful evening it turned out to be!
Posted by Unknown at (permalink) 10:58 AM No comments: 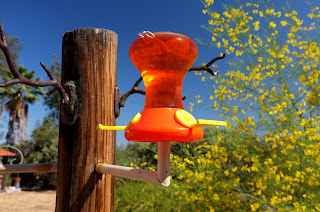 We've been actively feeding our orioles (Bullock's and Hooded, in roughly equal numbers) for several years now.  This year we have more than ever, the children, we're guessing, of several generations of local orioles that have learned where they can get some easy, tasty chow.

The feeders we use are designed to be hung, so we've been hanging them from the same hangers we use for our hummingbird feeders.  In general, we're very happy with these feeders – the orioles like them, plus they have a clever little “bee guard” that's very effective at keeping the bees out while letting the orioles in.  But the feeders have one attribute we don't like: if you wiggle them in the slightest, the liquid food sloshes right out the holes.  The orioles, being fairly large birds, shake the heck out of the feeders when they land and take off.  We've had puddles of oriole food (sugar water, basically) collected under the feeders.  Our suspicion is that more food spills than is eaten.

So this weekend I embarked on a hack of the oriole feeders – and so far, at least, it seems to have worked very well!  The photo above right shows the hack: a 7/8" dowel poking up into a hole in the bottom of the feeder.  This hole was already there, though it wasn't 7/8" in diameter – it was somewhere between 3/4" and 7/8".  I don't think these holes were intended as a mounting mechanism; I think they're there to strengthen the bottom piece of plastic.  I noticed that the holes had three vertical ridges of plastic in them, just 1/32" or so high.  I ground them down with a Dremel tool, and voila! – a 7/8" dowel then fit very nicely.

To make the “L”-shaped dowels, I cut each dowel at 45°, then glued the two pieces to make a 90° angle.  I used a fast-curing epoxy glue, and clamped them overnight.  The clamping was a bit tricky, but I used a simple trick: I nailed a finishing nail into the angled end of each dowel (if you look closely at the photo above, you can see the nail hole just above the bottom).  Then I used a small bar clamp to hold the pieces together – the nails kept the clamp from slipping.  Then all I had left to do was to drill level holes in the post, to hold the dowels – this was made easy by a convenient level built right into my drill.  A little glue, and I was done.

While I was taking the photo above, I was joined by a fearless female hummingbird, drinking from a hummingbird feeder just below the oriole feeder I was photographing.  Also, a very frustrated bug landed on the oriole feeder and tried very hard to get in the feeding hole.  It failed completely :-)  As always, click to enlarge any of the photos...

Posted by Unknown at (permalink) 10:44 AM No comments:

Kangaroos have evolved a special response to shopping bags:


Yes, I know this can't possibly be for real.  I'll bet they had a lot of fun making this video, while imagining all the Americans who would buy it...
Posted by Unknown at (permalink) 9:14 AM No comments:

One Hardly Knows What to Say...

Posted by Unknown at (permalink) 9:12 AM No comments:

Here's a beautifully simple illustration (click to enlarge) of the problems caused by the “welfare cliffs” (reductions in welfare benefits triggered by earned wages).  This is worth studying, as an example of public policy with unintended consequences (at least, I sure hope they were unintended!).

The example on the chart below starts with a single mom earning (through a job) $29,000 a year.  She also qualifies for several kinds of welfare payments, which (added to her wages) brings her net income and benefits to over $57,000 a year.   Now consider what happens if she gets a raise to $32,000 a year in wages: the welfare payments she qualifies for drop steeply (the “welfare cliff”), and her total income and benefits drop to about $50,000 a year.  So...she gets a raise of $3,000 a year, but gets a total income cut of over $7,000 a year.  If you were in that single mom's place, would you ask for a raise?

The example in the chart below illustrates a slightly different point.  That same single mom would have to get a raise from $29,000 to over $69,000 before she saw higher net income and benefits. This happens from a combination of two factors: the previously described “welfare cliffs” and our progressive income tax system that confiscates larger percentages of your income as you make more.

Only the stupid welfare recipients are going to try to earn more, to make a successful career.  All the smart ones have the game figured out: you win by making between about $20,000 and $29,000 in wages.  Anything more than $29,000, you lose.  The winners coast along, taking in those nice, free welfare dollars...

What's the solution?  It isn't hard.  Design our tax code and welfare system such that no matter what situation someone is in, if they earn a dollar more in wages, an interesting percentage of that goes into their pocket.  Better yet: do away with the welfare entitlements altogether, and turn it back into what it was originally intended to be: a safety net.  There are many ways to accomplish this, but perhaps the easiest one is what some other countries already do: gradually reduce the amount of welfare over time... 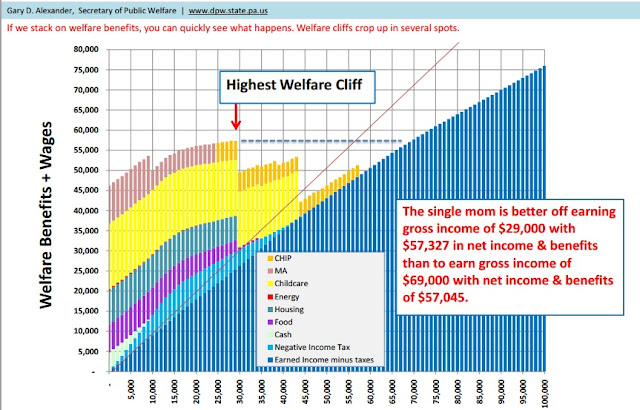 Posted by Unknown at (permalink) 9:11 AM No comments:

Taken by the Hubble Telescope, via APOD, of course: 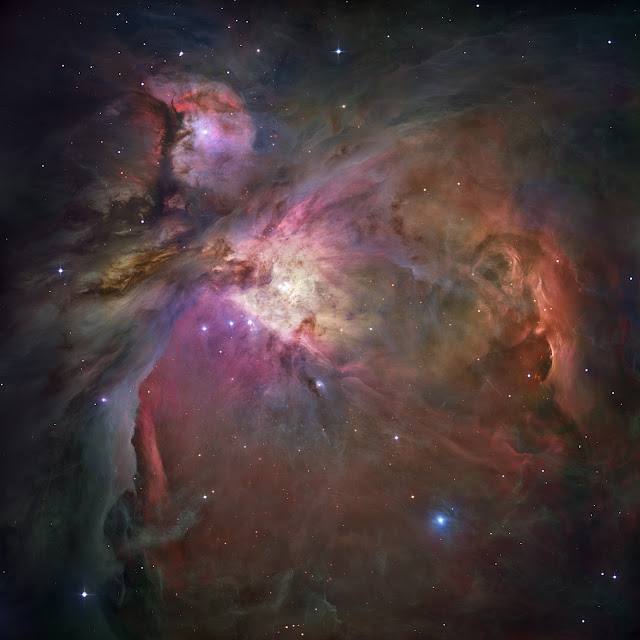 Posted by Unknown at (permalink) 7:15 AM No comments: