...and now it's going to come down – but nobody really seems to know where...
Posted by Unknown at (permalink) 6:30 AM No comments:

The annual index of programming langauge popularity (measured by lines of code produced) is out.  Java and C both still dominate, but are declining (as percentage share) slowly.  Objective-C (Apple's language of choice) is still climbing fast.  There are the usual surprises down in the mud (Ada, anyone?).

After last year's index came out, a colleague who was aware of my gray beard and somewhat odd background asked me how many of the languages here I had programmed in.  I never went back and looked it up, but here's the answer for this year's list: I've used 9 of those languages enough to call myself “proficient” in them, and there are 5 more that I've done at least one project in.  There are several languages I've done a lot of programming in that aren't on this list at all: Forth (go ahead, laugh!) and a dozen or so assembly languages (most especially Z80)... 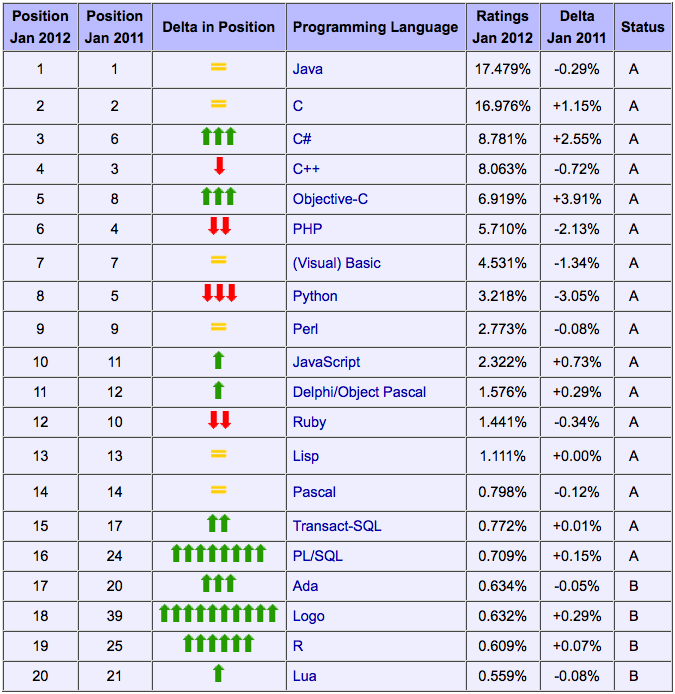 
I don't think I've seen you comment on this yet.
http://www.nydailynews.com/news/world/united-states-marine-corps-investigating-online-video-appears-show-marines-urinating-corpses-taliban-fighters-article-1.1004795

I realize the 24 hour news cycle likes to take things to extreme but I have a hard time worrying too much about the actions of these guys. While maybe unprofessional and stupid to video tape, this type of thing is hardly an unusual event. Anyone that has read the accounts of the war in the pacific, like "the old breed' will remember many similar accounts and really, much, much worse. De-humanizing the enemy is part of the process. Absolutely no one in the chain of command or those PR types commenting could possibly be surprised. They are just covering themselves and the foolishness of the situation.

These are not police officers. This is not your favorite city. You don't get a group of people to rush through a hail of bullets and mortar fire to kill a bunch of other people without a change in the normal thought processes. Most of their training is about effectively killing other people. Putting them into an environment where they are under constant threat from everyone around them and giving them a long list of rules before they can engage the enemy is asking for trouble and it is unfair to put our military in those positions. Does anyone seriously think they don't get some satisfaction when they do manage to kill some of the enemy?

There are a lot of ways to parse this story about the alleged video of soldiers urinating on corpses in Afghanistan. It seems ugly, but desecration of corpses has a long history in Afghan conflicts (often consisting of cutting off male-only body parts). And it’s bizarre to see people more upset about peeing on corpses than with corpsifying them in the first place.

But at the end of the day this is what I think is broken about the Afghan conflict. You don’t send warriors into a brutal guerrilla war with no rules and simultaneously expect them to be goodwill ambassadors as well. Given that these are two activities whose Venn diagrams of skills and mindsets have so little overlap, the military does a pretty good job trying to do what its being asked, but over the long run it’s a losing game (somewhere in here there is an Ender’s Game reference about trying to meld empathy with killer instincts).

I haven't commented before because I have such mixed and confused feelings about it, and I'm not at all sure we know what actually happened.  Warren nails it when he says there are a lot of ways to parse this story.  Things that occurred to me as I read it:
In the end, I realized that my only negative reaction to this event (assuming it really did happen) is that I regret the consequences of it being public.  I share Larry's assumption that this sort of thing happens all the time in war; even a brief reading of wartime history (take your pick of wars – it doesn't matter at all which one you look at) will convince you that this is an inevitable consquence of asking one group of people to kill another.

So I'm left unsurprised that this sort of thing happened, convinced that this is far from the only time it has happened in Afghanistan (on both sides), but wishing it hadn't become a public property.  I'm also feeling sad for the American soldiers involved, because it seems likely that their commanders will be required to make an example of them...
Posted by Unknown at (permalink) 6:05 AM No comments:

Three words I never imagined would fit together:

Posted by Unknown at (permalink) 5:46 AM No comments: