Once upon a time, a guy asked a girl 'Will you marry me?' The girl said, 'NO!' And the guy lived happily ever after and rode motorcycles and went fishing and hunting and played golf a lot and drank beer and scotch and had money in the bank and left the toilet seat up and farted whenever he wanted.

Posted by Unknown at (permalink) 7:53 AM No comments:


Pocket Taser Stun Gun, a great gift for the wife. A guy who purchased his lovely wife a pocket Taser for their anniversary submitted this:

Last weekend I saw something at Larry's Pistol & Pawn Shop that sparked my interest. The occasion was our 22nd Anniversary,  and I was looking for a little something "extra" for my wife.

What I came across was a 100,000-volt, pocket/purse-sized taser. The effects of the taser were supposed to be short lived, with no long-term adverse affect on the assailant, allowing her adequate time to retreat to safety...WAY TOO COOL!

Long story short, I bought the device, and brought it home. I loaded two triple-A batteries in the thing, and pushed the button. Nothing! I was disappointed. I learned, however, that if I pushed the button AND pressed it against a metal surface at the same time; I'd get the blue arc of electricity darting back and forth between the prongs.

Awesome!!! Unfortunately, I have yet to explain to the Wife what that burn spot is on the face of her microwave.

Okay, so I was home alone with this new toy, thinking to myself that it couldn't be all THAT bad, with only two triple-A batteries, right?!!! There I sat in my recliner with my cat, Gracie looking on intently (trusting little soul) while I was reading the directions, and thinking that I really needed to try this thing out on a flesh & blood moving target.

I must admit, I thought about zapping Gracie, (for only a fraction of a second) and then thought better of it. She's such a sweet cat. But, if I was going to give this thing to my wife to protect herself against a mugger, I did want some assurance that it would work as advertised. Am I wrong? So, there I sat in a pair of shorts and a tank top, with my reading glasses perched delicately on the bridge of my nose, directions in one hand, and taser in another. The directions said that a one-second burst would shock and disorient your assailant; a two-second burst was supposed to cause muscle spasms, and a major loss of bodily control; a three-second burst would purportedly make your assailant flop on the ground like a fish out of water. Any burst longer than three seconds would just be wasting the batteries.

All the while, I'm looking at this little device measuring about 5" long, less than 3/4 inch in circumference; (pretty cute really, and loaded with two little bitty, itsy, bitsy triple-A batteries) thinking to myself, "NO possible way!"

What happened next is almost beyond description, but I'll do my best. I'm sitting there alone, Gracie looking on with her head cocked to one side as if to say, "Don't do it master," reasoning that a one-second burst from such a tiny little ole thing couldn't POSSIBLY hurt all that bad...

I decided to give myself a one-second burst, just for the heck of it. I touched the prongs to my naked thigh, pushed the button, and HOLY MOTHER OF GOD, WEAPONS OF MASS DESTRUCTION @!@$$!%!

I vaguely recall waking up on my side, in the fetal position, with tears in my eyes, body soaking wet, both nipples on fire, testicles nowhere to be found, with my left arm tucked under my body in the oddest position, and tingling in my legs.

The cat was standing over me making meowing sounds I had never heard before, licking my face, and undoubtedly thinking to herself, "do it again, do it again!"

Note: If you ever feel compelled to "mug" yourself with a taser, one note of caution: there is NO SUCH THING as a "one-second burst", when you zap yourself. You will not let go of that thing until it is dislodged from your hand by a violent thrashing about on the floor. A three second burst would be considered conservative. SON-OF-A-%#&**%#... that hurt!!!

A minute or so later (I can't be sure, as time was a relative thing at that point), I collected my wits (what little I had left), sat up, and surveyed the landscape. My bent reading glasses were on the mantel of the fireplace. (How did they up get there???) My triceps, right thigh, and both nipples were still twitching. My face felt like it had been shot up with Novocain, and my bottom lip weighed 88 lbs. I'm still looking for my testicles. I'm offering a significant reward for their safe return.

That image of Gracie saying “Do it again!” will ring true to any animal owner. I'm positive that all of our seven cats and four dogs would do exactly that!
Posted by Unknown at (permalink) 4:03 AM No comments:

Paroled Arsonists in Our Midst?

Now comes word that authorities are suspicious that a paroled arsonist was responsible for setting “several” fires in East County:


On Monday, CAL FIRE Battalion Chief and acting Boulevard Fire Chief John Francois informed Boulevard Fire Board members that a paroled arsonist had been living in the community.  The arsonist is now back in custody for violating his parole terms.

“Several suspicious fires are still under investigation,” Donna Tisdale, Chair of the Boulevard Planning Group informed East County Magazine. Tisdale expressed shock that community members were kept in the dark about a potentially dangerous arsonist in their midst at the height of fire season—and she is now calling for reforms in the law to require that neighbors be notified if an arsonist is turned loose in their neighborhood.


So this sorry sack of poop is back in jail.  Good, though not good enough – some idiot might let him out again.

Posted by Unknown at (permalink) 3:44 AM No comments:

Where Our Oil Comes From... 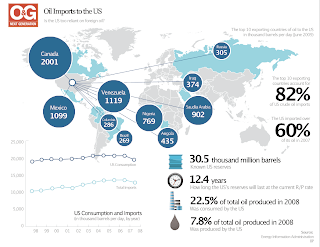 There were some surprises for me in the chart at right (click to enlarge).   For instance, I had no idea we imported significant amounts of oil from Angola and Columbia.

But the big surprise was that our (U.S.) total oil consumption declined last year.  It makes sense, given the recession, but somehow that little factoid had escaped my eye...

Posted by Unknown at (permalink) 3:25 AM No comments:

From the San Diego Union-Tribune:


A man accidentally shot himself in the hand and his wife in the knee as he was taking apart his gun to clean it Thursday, sheriff's officials said.

The shooting was reported about 3:30 p.m. in a home on Lawson Valley Road in Jamul.
The 27-year-old man told deputies that he was taking apart his .40 caliber Springfield Armory semi-automatic pistol to clean it. In order to remove the barrel, he had to pull the trigger. He removed the magazine, but a round filled with "snakeshot" ammunition, similar to BBs, was still in the barrel and it went through his hand and into his wife's knee, the Sheriff's Department said.

Both were flown to Sharp Memorial Hospital for treatment. Authorities said the incident appears to be "purely accidental."


Anybody know anything more about this?
Posted by Unknown at (permalink) 3:17 AM No comments: