Ok, there are moments...

Ok, there are moments ... when even I can laugh about this election cycle!  I'm no Trump supporter, but this bumper sticker is funny!

Posted by Unknown at (permalink) 12:23 PM No comments:

A great example ... of the American press deliberately (and skillfully) manipulating its audience.  A gullible and intellectually shallow American public starts treating it as fact (and that is exactly what happened with that documentary).

Things like this are what has made me so careful about how my news is sourced these days.  Most of what I read is not mainstream media, but alternative sources that are most commonly overt and honest about their biases – and I read sources with opposing biases so I can get all sides of an issue.  I've been doing this for years now, so it's become habitual.  I don't know any other way to have any chance at all of actually understanding the world, rather than being fooled by our self-proclaimed “elite”...
Posted by Unknown at (permalink) 12:13 PM No comments:

I recovered this photo from a slide, which my mom had carefully put into an envelope and marked it “Negative - Doc Johnston”.  I guess my mom thought every transparency was a negative. :)  It's by far the best photograph I've found of this memorable character, now long gone.  The slide is dated (by the lab) August '72, and while that's a few years after I last saw him, his appearance in it exactly matches my memories of him.

I saw “Doc” (who wasn't an actual doctor of any kind!) most often in the early '60s, on our annual trips to the cabin in Maine.  I was between about 9 and 12 during that period.  He'd come over to visit fairly often, and we'd sometimes visit other friends while he was there.  I believe it's fair to say that Doc Johnston knew just about everybody in the Lincoln, Maine area – and that they all adored him.

He could have been a character out of a Mark Twain or Hemingway novel.  He was justly famous for his one-liners and snappy comebacks.  One that comes to mind: a pair of Jehovah's Witnesses came to his home, knocked on the door, and told him that they wanted to help him find Jesus.  Doc immediately started searching for his jacket and cap, and said “I’ll come help!  I didn’t even know he was lost!”  Locals up there who knew him could tell you a million stories like this about him, and I'm pretty sure most of them were even true! :)

I remember Doc sitting in an old rocking chair we had in the camp, a wood-framed chair with slung carpet upholstery.  He'd call me over to sit in his lap, where I'd sit listening to him and the other adults telling stories.  He was the only one who didn't dial back the profanity just because a little kid was there – he couldn't have cared less.  He also let me take swigs from his glass of beer or spirits when my mom wasn't looking. :)

That rocking chair is now in my barn.  It will take its place in my office someday soon, when I've got the furnishings more in order.  I'll think of Doc and my mom (who owned that chair for many years) every time I see it.
Posted by Unknown at (permalink) 9:49 AM No comments:

Paradise ponders...  Debbie had physical therapy yesterday afternoon, and she hit another couple of milestones: she took her first steps without a walker (but with a gait belt so she felt safe), and she got her flexion to 90°.  It sure was nice to see her walking, even if it was just a few halting steps.  We're going to start practicing that at home now.

We celebrated by having a nice dinner at the Black Pearl.  We had a fine meal, made all the better by our cheerful, talkative hostess.  Then we decided to go on a little four-wheeling trip.

A friend here had told us about a place called Bug Lake, about 30 miles from home – one of their favorite destinations.  So we piled Mako and Cabo into the FJ Cruiser, and we took off.  The map at right shows our route – be aware that the topo map altitudes are in meters.  The trip was pretty all the way.  There's a surprising (to me, anyway!) amount of fall color, mostly oaks and maples, as soon as we got over about 6,500'.  The first photo below will give you an idea what we were seeing.

The last part of the trip was through a pretty forest, mostly mixed aspen, fir, and spruce.  Smelled wonderful!

It was pretty good wildlife viewing, too.  We saw an osprey eating a large trout atop a utility pole, quite a few deer, a posing flicker, a gray squirrel, a skunk, and a teensy little chipmunk near the top.  Cabo was practically non-stop speed-sniffing through our open windows, terrifically excited.  Mako spent most of the time asleep, just like Mo'i used to do.  He did wake up, startled, and barked when we drove nearby some big beef cows.  Several times Cabo (especially) and Mako sighted some deer, and got all excited about it.  It was fun to have them along.

When we actually got to Bug Lake, it was a huge disappointment.  It's basically a large mud puddle, surrounded by tromped-down muddy shores where bazillions of cattle had come for water.  The surface of the lake was full of ripples, too small for fish we think – probably bugs, and probably how the place got its name.

The second photo below is one of the gates for the Johnson Ranch (a large cattle ranch in the area).  We were struck by the flag flying proudly in the breeze, way out there in the middle of nowhere... 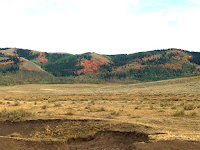 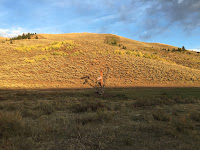 Posted by Unknown at (permalink) 8:38 AM No comments: