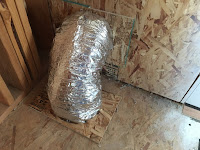 Paradise ponders: moderated temperature, kittenly progress, and bigeye tuna edition...  Yesterday I finished up all the remaining “mechanical” work on my office temperature moderation project.  Part of that work involved making cover plates to go over the three big rectangular holes I had earlier cut into the OSB in the storage part of my barn (photo at right shows two of these).  These were more fun than you might think, as I had to cut a 10" diameter hole in each of the cover plates.  I used my bench scroll saw to do that, and it made very short work of it indeed.  The rest of the work involved putting insulation around my office door, and then wiring up the blower.  Once that was all finished I lit off the blower, shut off my heater, and let it run all last night.  This was a test of sorts, as the outside temperature got down to 17°F last night.  This morning when I got into my office at 6 am, it was quite comfortable inside.  The temperature measured 68.3°F, which had me a bit puzzled at first: it was actually warmer in my office than the 64.8°F of the first floor.  Then it dawned on me that I'm sucking air from the ceiling of the first floor, not the 5 foot high area where the thermostat is set to 65°F.  To test that theory, I got my precision thermometer up on a ladder with me and measured the temperature at the ceiling: 73.6°F.  That got me to wondering what it would be on the floor of the first floor, so I measured it there: 62.1°F.  So there's an 11°F gradient between the floor and the ceiling of the first floor – much more than I'd have guessed.  On the other hand, there's nothing circulating the air down there, so there's every opportunity for a gradient to be established in a relatively stable way.  That observation led me to turn on the ceiling fan in my office; we'll see what that does to the measured temperatures there.

This morning I've started writing the software that will eventually control the new fan, based on the algorithm I've described in a previous post.  This would be a trivial exercise in daemon construction but for the fact that I'm going to allow some nice monitoring capability.  That requires me to write the daemon multi-threaded – a new experience in C programming for me.  I've also got another challenge: a parts delivery is late and prevents me from actually bringing up the Raspberry Pi I bought for this purpose.  So I'm writing a bunch of software that I won't be able to debug for several days, at least.  This is not my preferred modality – I like to write a little bit, then test, fix, and repeat...

The little kitten is doing very well.  We may have settled on the name “Kalea” (pronounced ka-LAY-ah), which is Hawai'ian for “full of joy”, but I wouldn't count on that. :)  It's eating like a little piglet, and spends a lot of the time sleeping.  All signs of stress have disappeared. 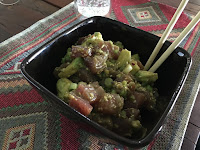 Yesterday at Macey's we spotted some scrumptious-looking bigeye tuna.  We bought about 20 ounces of it, and today my lovely bride made us a mess of poke with it (my bowl at right).  Oh, man, was that good!  That's raw fish in a soy-based sauce flavored with a bit of sesame oil, with avocado, green onions, and some sesame seeds for garnish.  That big-eye tuna disappeared mighty quickly!
Posted by Unknown at (permalink) 2:10 PM No comments: