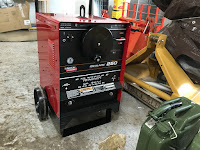 Progress in Paradise...  I got a few good hours in my shop this morning, and got enough done that I'm enjoying a sense of satisfaction about it.  First thing I did was to install the handle and wheels on my welder.  I'd bought the “portability” kit a while back, but then stupidly never actually put it together.  That's done (at right) and it does indeed make the welder portable.  Well, more portable than it was :)

The rest of the photos show various steps and progress with my fabrication of the stakes.  There are 18 stakes, each of them 2'6" long.  These were cut out of 8' 2x4s, and then one end of each had to be sawn down to match the pocket size.  That involved sawing about 1/4" from the bottom 5" of each of the narrow sides of each stake, and about 1/8" from the wide side.  In the first photo below, you can see just how thin a slice that made on the wide side!  I did this with my band saw, which made short work of something that would have been quite tedious without it.  Then I drilled three carefully placed holes in each of the stakes (for 54 holes in all); these are where the bolts that hold the slats on will go.  I finished all of that fabrication today – so now I have all 18 stakes sitting nicely in their steel pockets, and holes in the right place for each one.  Tomorrow I'll start putting on the slats! 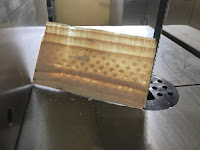 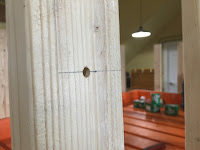 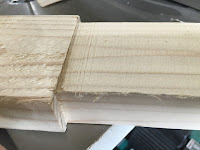 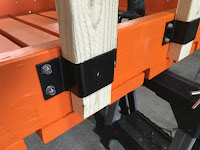 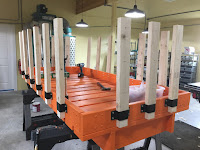 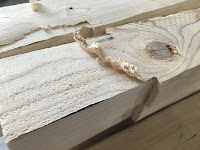 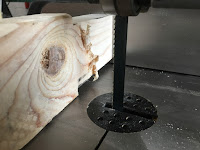 An even better way to stop robocalls?

An even better way to stop robocalls?  I've written here several times about our Sentry 2, the best call blocking device I'd ever tried.  A few weeks ago I read about an alternative to having your own call blocking device: a free service called Nomorobo.  We've been using it now for three weeks, and I have only positive things to report:
Here's what it's like to use the service.  Whenever someone calls you (including any robocalls), your phone rings as usual.  If it's a robocall, the phone rings just once: after that, Nomorobo blocks it and you're done.  If the phone rings more than once, it's a real call.  That's it.  That's the complete operating instructions.

We've had just one robocall slip through since starting our use of Nomorobo. That was a political call for Bernie Sanders (boy did they pick the wrong household for that!).  Our neighbors reported getting dozens of robocalls in the days leading up to our primaries this Tuesday.  Nomorobo blocked all but one of them.

At the same time, now we have zero problems with people getting through that we want to get through.  The Sentry 2 greets callers it doesn't know with a deliberately intimidating message, so if a store calls us and we don't have their number programmed in, they get that message.  Now they just hear the phone ring, as though we had no call blocking at all.

Summary: winner!
Posted by Unknown at (permalink) 9:10 AM 3 comments:

Can you ... read this without feeling the doom?  What's going to happen when these precious little snowflakes meet the real world?
Posted by Unknown at (permalink) 8:20 AM No comments: