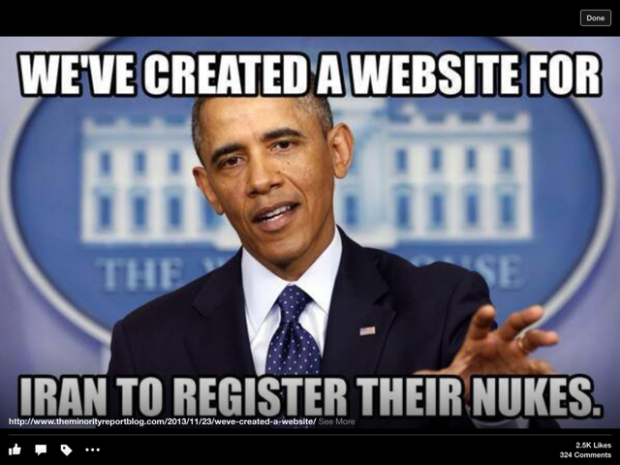 Persian ponders...  I'm not liking the looks of this...

Reason has a brief analysis.

Will Israel and Saudi Arabia become allies?  Maybe.  It's especially interesting that the Saudis have not responded at all to the rampant rumors of their cooperation with Israel...

Worse than Munich.  Bret Stephens in a good piece in today's Wall Street Journal.  The lede:


Never in the field of global diplomacy has so much been given away by so many for so little.

Posted by Unknown at (permalink) 6:51 AM No comments:

Virginia cancer patient loses her coverage because of ObamaCare.

A cheat sheet for the ObamaCare hearings.  Pro Publica has a good roundup...

Democrats set to turn on Obama if healthcare.gov isn't ready next week.  Oh, I'd better stock up on popcorn!

Man, the number of ObamaCare losers really seems to be piling up, doesn't it?  So says the Chicago Tribune, aka That One's home town newspaper.

ObamaCare is no Starship Enterprise.  Megan McArdle, with this bonus passage:


Tech people tend to regard their end-users as a sort of intermediate form of life between chimps and information-technology staffers: They’ve stopped throwing around their feces, but they can’t really be said to know how to use tools.

Megan is a geekly treasure.

The next ObamaCare mirage.  The cost curve going to bend, all right.  But the wrong way...


Posted by Unknown at (permalink) 6:41 AM No comments:

Geek humor: the etymology of “foo”...

Voting with his feet...

Voting with his feet...  This guy left the U.S. to avoid onerous taxes.  The same thing is happening more frequently on a state level – I know at least a half dozen people who have left California who cited taxes as one of the reasons (not always the main reason, though).  We're joining them soon, and high taxes (along with other political insanities) are what's motivating us...
Posted by Unknown at (permalink) 6:22 AM No comments:

Bureaucracy running amok alert!  GM is recalling almost 20,000 Camaros because a sticker might peel.  Seriously.  Diane Katz says that “regulators should come with a warning label” – she's right!
Posted by Unknown at (permalink) 6:16 AM No comments:

Pater: Where there's a will, there's a way...  The terrible photo at right is of my dad in our cabin in Chester, California on our trip to Lassen National Park in 2007.  Family and friends won't be surprised when I tell them it wasn't particularly cold that day – my dad liked his rooms hot.  This is in June, and he's under a good blanket, has a jacket and thermal underwear on, and a hot oak fire is roaring.  I was in the kitchen of our cabin with the door wide open to avoid terminal overheating :)

In the early '60s, my dad was trying to get his mail-order plant business going.  As anyone who has run a business can tell you, there are a lot of “moving parts” to any business, and this one was no exception.  One particular challenge my dad had was marketing: how to let people know what plants he had, how to order them, etc.  He ran ads in some magazines, and the nursery showed in the Philadelphia Flower Show (that was an exciting event for a kid to behind the scenes of!).  When inquiries came in from these sources, my dad wanted to have a catalog and some booklets about the plants to send in response – the sort of bog-standard direct mail campaign any business might run, but with some class and personal touches.

That sounds straightforward, and it probably would be so today.  But back then, short-run printing was quite expensive.  The costs through a printer for what my dad wanted to do were prohibitive.  Now, if you knew my dad, you wouldn't be surprised at what happened next – is this was just the sort of thing to get his dander up.  He had a darned good idea of what paper cost, and how much could a little ink and some staples cost?  If he couldn't get the printer to do the job for a reasonable price, why, then, he'd just do it himself!

When he started this project, my dad knew next to nothing about printing – but he did know some people connected to the business.  He spent some evenings studying up on the process of printing, and quickly concluded that he needed offset printing capability (the most common commercial printing technology) to do what he needed to do: one and two color materials, with black-and-white photos.  He bought a text book on offset printing, and read it cover-to-cover.  He found sources for getting offset printing aluminum “plates” made, and for ink and paper.  Finally, he figured out that he needed a few machines: an offset printing press, a folding frame, and a long-arm stapler.

Somewhere he found a used Multilith 1250 offset press for sale at a good price.  The photo at right isn't the one he bought, but it could be its twin.  I spent many, many hours operating and cleaning that machine – seeing this photo instantly brought back its sounds and smells.  The big roller on the left holds the printing plate; the other rollers spread the ink and water evenly (both are used in the printing process) over the plate.  Blank paper is loaded on the chute on the right, and put in position with that big crank.  The hoses you see are vacuum hoses for the paper handling system; they made a distinctive sound when the machine was running.

The press was installed in our basement, in the area my dad used as his office.  He also bought a folding frame (a simple machine that let you manually fold many sheets of paper exactly the same way, one at a time, while making very sharp creases) and a manual long-arm stapler (for stapling multiple pages of a catalog together).  He taught himself how to operate the press, often with me watching, as I was fascinated by this new and (to me, anyway) awesomely complicated and sophisticated piece of machinery.  There were so many ways that printing could go wrong!  Not enough ink, too much ink, second color not “registered” correctly with the first color, skewed printing, paper jams, and on and on.  Each time my dad first encountered one of these problems, he'd figure out how to fix it, keeping notes in a little black notebook.  After a while, these accumulated into a sort of home-grown “Printing for Dummies” kind of book, one that came in very handy for the next step: teaching me how to run that press!  My dad had noted my interest, and I'm sure he was quite happy to let someone else do that work :)

On the printing my dad was a perfectionist.  If a run didn't come out just right, it got thrown away and done over.  Often – probably most often – the problem required tearing down and cleaning the press.  All those rollers had to come off and be cleaned thoroughly with solvent.  Paper dust had to be cleaned out of every nook and cranny of the press, which conveniently came apart rather easily.  Then we'd put it all back together, do some trial runs, and then try again.

The mail-order business didn't last all that long.  By the late '60s our nursery was morphing into a different kind of business, and we didn't do any more mail order.  Somewhere along the line the printing press and other equipment were no longer needed and they disappeared; I don't recall what happened to it all.

The entire episode with the printing press nicely illustrates a facet of my dad's personality: his stubborn refusal to let the world stop him from doing something he set his mind to do.  I'm actually not sure whether it was a good business decision for him to buy the printing press – I don't know what it cost, all in, compared to having a printer do it.  Nor do I know if there was actually a return (in orders) on his investment of money and time.  But I do know this: my dad decided that he needed catalogs and booklets, and he wasn't going to let the expense of them stop him from having them.  No matter what it took, he was going to figure out how to get the kind of printed material he wanted to have.  He'd find a way to do it that he could afford – even if he had to learn a new craft, and invest entire winters, to do it.

That's a valuable lesson for any kid.  In my later ventures, perhaps you won't be surprised that I often remembered and reflected upon my dad and his printing.  In fact, I did more than just remember it: I actually did precisely the same thing, in a business I had in the '80s that sold practice management software to optometrists, we bought an offset press and associated equipment for exactly the same reasons my father did.  Recently I was privately quite amused when my youngest brother (Mark), in his business, did exactly the same thing yet again, albeit on a much larger scale: in his business, they built an entire printing “factory” in Phoenix.   Mark was just an infant when my dad had the printing press, so I'm sure he never even knew about it.  Maybe printing is in our genes...

Coin-operated symphony...  A Beethoven flash mob.  Kids dancing.  People singing along with the chorus.  Awesome!  Full screen this one, folks...
Posted by Unknown at (permalink) 4:06 AM No comments: