I have no idea who this guy is, but I sure love his rant:

I like to think that, every time i listen to a WSJ podcast, a hippie loses his wings.

As the puppy blender would say: heh!
Posted by Unknown at (permalink) 5:53 AM No comments:

Jamul and the Real Estate Crunch... 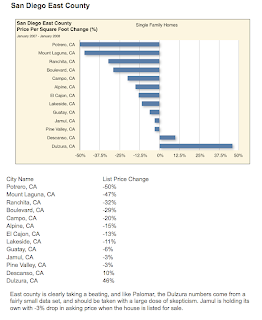 For months now, the news has been full of doom and gloom on the real estate front, and indeed in some areas the price declines have been dramatic. My informal reading of the price impacts leads to an undoubtedly simplistic conclusion: the areas with the worst impact appear to be the same areas that attracted the most questionable loan practices. If I'm right on that score, then areas like Eastlake, Temecula, and the other fast-growing “bedroom communities” would be hardest hit. On the other hand, backcountry areas like Jamul should be relatively immune; the folks out here trend strongly to the conservative and old-fashioned (at least when it comes to financial matters).

So I was very interested to see this study of the asking price (normalized to the price per square foot) of houses in various San Diego County neighborhoods over the past year. The east county year-over-year numbers are in the screen grab at right. Jamul fared very well, showing just a 3% decline in the past year – knowing the volume out here is low, I'd guess that's well within the statistical margin of error from a wash. In general, my theory seems to be a reasonably good fit for the data, with some notable exceptions (some of which the study authors caution on due to lack of data).

We've got no plans to sell our place, but it's still comforting somehow to see that the apparent market value of our property hasn't disappeared...

Posted by Unknown at (permalink) 5:39 AM No comments:

Moment of Truth in Iraq... 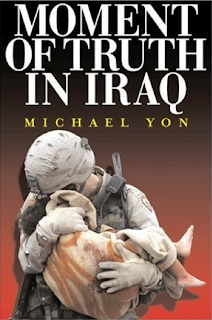 As I write this post, Moment of Truth in Iraq, by Michael Yon, is #29 on Amazon's list. My readers already know how much I admire Yon's work, so it will be no surprise that I ordered this book. Last night I started reading it, and made it about halfway through. It has far exceeded my high expectations (high because I've read so much of Yon's work). The book is an in depth look – from a soldier's perspective – of the conditions that led to us having a second chance to win in Iraq, and of General Petraeus' successful exploitation of that chance. Yon makes it clear that we're not done, and we still could blow it – but his objective and honest assessments give me great hope that we won't.

The publisher of this book makes an extraordinary statement, the likes of which I've never seen before:

I HAVE NEVER BEEN PROUDER TO PUBLISH A BOOK

Michael Yon changed my mind about the war in Iraq, by making me understand it for the first time.

From the very beginning I was against the war. I thought it would be a disaster, another Vietnam. And until I had the privilege of working on this book with Michael I was always for immediate pull-out: why should one more American die for a doomed effort?

Michael--who is as close to totally non-political as anyone I know--showed me two things. First, because I judged by Vietnam, the war of my youth, I had radically underestimated what American soldiers could do. I knew they could blow away any regular opponent on any battlefield. But wage a counterinsurgency against an enemy with broad support in the population? Win the "hearts and minds," to use the Vietnam era phrase that now can be used only ironically? That was asking too much, I thought.

I was 100 percent wrong. Today's American soldiers excel at counterinsurgency, because they excel at the most important thing: winning over the people by inspiring them with their own courage and compassion, discipline and determination. Reading this book is like watching the movie Apocalypse Now, but in an alternate universe in which the opposite always happens. Every time our soldiers get into an incredibly tense situation with some Iraqis who might be friends or might be enemies or murderers, some situation in which what's needed is amazing calm and courage to keep things from blowing up and ending in a blood bath, our guys pull it off!

Just wait until you read the Chapter "High Noon" (my favorite), the story of the American soldiers who have to arrest a corrupt but politically popular Iraqi police chief we had put in office in the first place because he had been a real hero in fighting the terrorists. He had to be removed by Americans to show the Iraqis we really did believe in the rule of law. The whole thing could have blown up into a one-town civil war with hundreds dead on both sides. Won't tell you how it ends, but you will be amazed and very proud.

The other thing Michael helped me understand is the difference between terrorists we just have to kill (often foreigners, or local criminals) and local insurgents we should have been working with all along. For almost five years I could not tell from watching the news--and certainly not from listening to the Administration--who the enemy was, what they wanted or why they were fighting. Not surprisingly it turns out that understanding the various people we were fighting--some of whom have since become great allies--was the key to winning the war, which we are now clearly doing.

I am convinced that everything I once thought about the war was wrong. The truth is we are doing a great thing in Iraq, most of the Iraqi people really do want to be a united democratic nation and already consider America their greatest friend and ally. It would be a crime to turn tail now and abandon them now.

I owe all that to Michael's book, which is why I believe publishing Moment of Truth in Iraq may be the best thing I have ever done for my country.

I can hardly wait to finish this book tonight. If you don't already have a copy, stop whatever you're doing now and order one – you won't be sorry you did, whatever your views on the war in Iraq. Even if the only thing you get out of it is the pleasure of reading some inspiring stories of Americans at their best, it's well worth the price. And remember that the proceeds will help Yon – one of the world's finest independent journalists – keep up his good work...

Posted by Unknown at (permalink) 5:17 AM No comments: