Posted by Unknown at (permalink) 8:47 AM No comments:

They Kind of Blame Us...

Posted by Unknown at (permalink) 8:46 AM No comments:

This morning I read a post on marco.org (a blog by Marco Arment, the founder of Instapaper) about a Microsoft store on the day of the Surface launch (yesterday).  The post was mildly interesting for its depiction of the difference between adjacent Microsoft and Apple stores in a mall.  But one passage really jumped out at me, for reasons that had nothing to do with the ostensible subject of the post (emphasis mine):

I broke character slightly. “I don’t know, I saw the Retina iPad upstairs and I can’t see the pixels at all on it. On here, I can see the pixels clearly.”

“No you can’t. Where can you see the individual pixels?”

He scaled the icon up to “zoom in”, which, of course, changes what the physical pixels display. “I can’t see any pixels!”

I gave up. It was like arguing with a Tea Partier. But I figured, now that I had broken character a little, I’d risk a bit more. “Did you apply to work at the Apple Store upstairs first, or did you always want to work here?”

Think about that.  Arment describes his little debate with the Microsoft Store employee, who displayed his technical ignorance and his profound bias toward Microsoft.  Arguing with someone like that is clearly futile; the only way to win would be to re-educate the lad.  Then Arment says that's like arguing with someone in the Tea Party – clearly implying that such people were ignorant and biased.  Further, he makes that statement in a way that assumes his readers will understand that Tea Partiers are ignorant and biased.

This is precisely the kind of thing I hear repeatedly on NPR and read on progressive political blogs (I torture myself so you don't have to!).  It's a fascinating glimpse of the walls of the “bubble” these folks live in.  Arment, and millions more like him, have completely dismissed the Tea Party as a collection of ignorant and biased fools.  They don't even hear the issues the Tea Party raises; they aren't worthy of their attention.

I find this very sad, personally.  I can't see a way for a democracy to stay healthy when most of its (voting) citizens are willfully ignorant.  I say “willfully” because people who live in a political bubble (whether conservative, progressive, or libertarian) are choosing not to engage with the ideas and issues raised by those outside their bubble.  Instead, they live the righteous life of a bubble-denizen, with all of their friends heartily approving of their bubble-ness.  It's so much easier that way – one doesn't have to actually think, as the bubble already knows the answer. 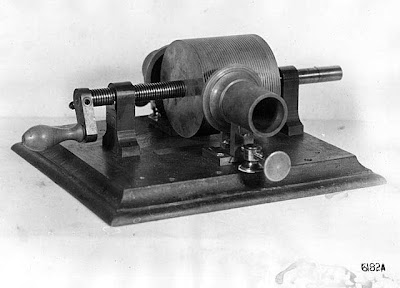 Scientists at the Lawrence Berkeley National Laboratory have recovered the sound from the oldest playable American recording – by Thomas Alva Edison in 1878.  The recording was made on an entirely mechanical phonograph that worked by pressing a needle into soft tin foil.

The way that the sound was recovered is interesting: the scientists didn't recreate the player.  Instead, they photographed the antique foil with a high resolution, 3D camera – and software analyzed the needle's indentations to recreate the sound.  No device ever even touched the foil.  I'm sure Edison would have been delighted by this!

Here's what the recovered recording sounds like.  Though it's very scratchy, you can hear a cornet playing and a man reciting portions of a couple nursery rhymes (Mary Had a Little Lamb and Old Mother Hubbard)...