You Know You Live in a Country Run by Idiots...

Via neighbor and reader Marisa S.:

She ends her email to me with this wonderful quote from Henry Ford, which was new to me:


Any man who thinks he can be happy and prosperous by letting the Government take care of him; better take a closer look at the American Indian.

Oh, ain't that the truth, sister!
Posted by Unknown at (permalink) 6:37 AM No comments:

From the Los Angeles Times:


As the state moves to expand healthcare coverage to millions of Californians under President Obama's healthcare law, it faces a major obstacle: There aren't enough doctors to treat a crush of newly insured patients.

Some lawmakers want to fill the gap by redefining who can provide healthcare.

They are working on proposals that would allow physician assistants to treat more patients and nurse practitioners to set up independent practices. Pharmacists and optometrists could act as primary care providers, diagnosing and managing some chronic illnesses, such as diabetes and high-blood pressure.

"We're going to be mandating that every single person in this state have insurance," said state Sen. Ed Hernandez (D-West Covina), chairman of the Senate Health Committee and leader of the effort to expand professional boundaries. "What good is it if they are going to have a health insurance card but no access to doctors?"

Hernandez's proposed changes, which would dramatically shake up the medical establishment in California, have set off a turf war with physicians that could contribute to the success or failure of the federal Affordable Care Act in California.

Great. Nobody could have foreseen this, say the liberals. The trouble with with that assertion is that a whole bunch of people did foresee this, including your humble blogger.  It's Economics 101, folks: make a valuable good or service (like healthcare) available to everybody with no (or almost no) incremental cost, and shortages will promptly ensue.

If this doesn't make sense to you, try this simple thought exercise: imagine that you could go to the car dealer and have your choice of (a) a used, beat-up 1954 VW bug, or (b) a brand-new Mercedes CL65, and all you have to pay is a $25 “co-pay”?  Which would you choose – the beater worth a hundred dollars or so, or the $200,000+ Mercedes?  I know I'd be leaving with the Mercedes.  Healthcare under Obamacare works the same way: anybody can have whatever healthcare they want, for (at most) a modest co-pay.  Surprise, surprise, surprise – the demand for great healthcare is going up!

Free markets do a marvelous, organic job of scarce resource allocation...
Posted by Unknown at (permalink) 6:28 AM No comments:

The British Library has a growing collection of digitized manuscripts online.  These are all done with modern high-resolution scanners, yielding beautiful results, as in this detail from a medieval bestiary below: 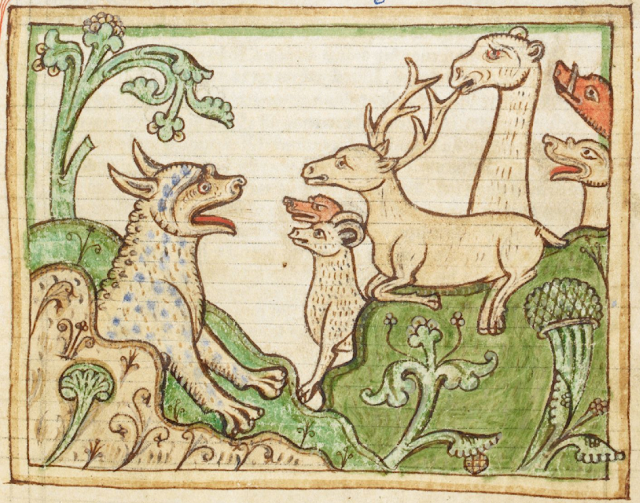 You're Not Really a Handyman Until...

Posted by Unknown at (permalink) 5:58 AM No comments:

I just received this email from LinkedIn: 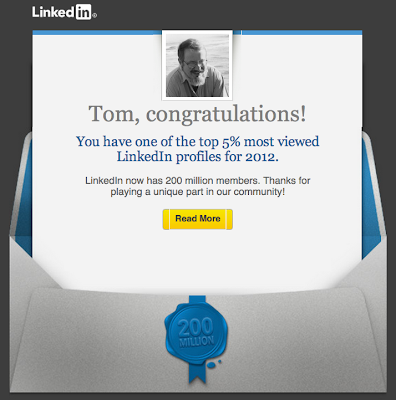 Now I'm trying to figure out why LinkedIn thought they should send me this mail.  It doesn't ask for anything – ah, yes it does.  When I click on the Read More button, I end up on a page asking me to share this on social media.

Which I'm doing, sort of.  But probably not in the way they wanted me to :)
Posted by Unknown at (permalink) 5:31 AM No comments:

The animation below is made from the famous essay by Leonard Reed: I, Pencil.  The lead:


I am a lead pencil—the ordinary wooden pencil familiar to all boys and girls and adults who can read and write.

Writing is both my vocation and my avocation; that’s all I do.

You may wonder why I should write a genealogy. Well, to begin with, my story is interesting. And, next, I am a mystery —more so than a tree or a sunset or even a flash of lightning. But, sadly, I am taken for granted by those who use me, as if I were a mere incident and without background. This supercilious attitude relegates me to the level of the commonplace. This is a species of the grievous error in which mankind cannot too long persist without peril. For, the wise G. K. Chesterton observed, “We are perishing for want of wonder, not for want of wonders.”

I, Pencil, simple though I appear to be, merit your wonder and awe, a claim I shall attempt to prove. In fact, if you can understand me—no, that’s too much to ask of anyone—if you can become aware of the miraculousness which I symbolize, you can help save the freedom mankind is so unhappily losing. I have a profound lesson to teach. And I can teach this lesson better than can an automobile or an airplane or a mechanical dishwasher because—well, because I am seemingly so simple.

Simple? Yet, not a single person on the face of this earth knows how to make me. This sounds fantastic, doesn’t it? Especially when it is realized that there are about one and one-half billion of my kind produced in the U.S.A. each year.

Pick me up and look me over. What do you see? Not much meets the eye—there’s some wood, lacquer, the printed labeling, graphite lead, a bit of metal, and an eraser.

It's a great introduction to the wonders of capitalism, and most especially the organic development of products.  It's also a great primer on the complexity of the modern world, which most of us completely ignore most of the time.  Capitalism and free markets are really the greatest wonder of the world...

Seeing this reminds me of one of my favorite books on engineering, which also uses the lowly pencil as its protagonist: The Pencil, by Henry Petroski.
Posted by Unknown at (permalink) 5:21 AM No comments: