We made a grand tour today: up Corkscrew Gulch, over California Pass, down to Animus Forks, over Cinnamon Pass, up and down American Basin, down to Lake City, up Engineer Pass, and finally down Engineer Trail.  Whew – what a day!

But oh, did we have a great day!

The highlight of today was the wildlife.  Here's what we saw: over a dozen deer, dozens of marmots and chipmunks (including a close encounter with one crazy marmot, at right), a long-tailed weasel, two pikas, three Rocky Mountain Goats, two ptarmigans, an osprey, a Rocky Mountain dipper, one western tanager, and a partridge in a pear tree (no, not really).  A ptarmigan at the top of Corkscrew Gulch started us off.  Debbie pulled off another of her astounding wildlife spotter feats today – we were driving down a dirt road at about 20 MPH, and she was looking out the right window.  Somehow she spotted a ptarmigan on the ground, looking like it was sitting on a nest, at about 200' away – almost motionless, camoflauged in the grass and dirt.  Awesome.  Took me five minutes just to find it while she was describing where it was!  It was a great wildlife day...

The entire trip was beautiful scenery, including a lot at over 12,000 feet.  We stopped in Lake City and had a great lunch (Debbie particularly liked her brisket and grilled onion taco).  There were lots of beautiful wildflowers, waterfalls, storms, mountain scenery, abandoned mines, and even an old lime kiln (for making cement).  Ah, it was great...

On the road from Cinnamon Pass to Lake City, we ran into the crazy marmot.  For some reason, this marmot – unlike any other marmot we encountered – was almost unafraid of people.  I got to with a couple feet of him, several times in several location.  Here are some other photos of him: 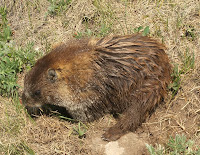 Every day our dogs (Miki and Racer) are having a terrific time while we're four-wheeling. Racer surprised us by being very interested in everything – he's got his head hanging out the window most of the time.  He's especially excited by two things: any moving water (like when we ford a stream or splash through a puddle) and any animal (chipmunks, marmots, deer – doesn't matter).  Miki, on the other hand, is more interested in being with us than in the travel itself.  By being in the back seat, he's with us all day and that makes him very happy.  Both of them, of course, absolutely love being let out for a run!  Today we let them play in a rushing stream.  Race enjoyed this much more than Miki, and here's a few photos of him playing:

Here are a couple of the deer we saw:

We saw the summer cabin we'd like to have (note the suspension bridge linking the parking lot and the cabin!):

Some more scenery from the day: 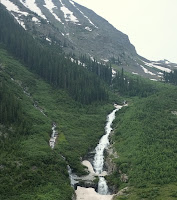 And finally, the flowers: 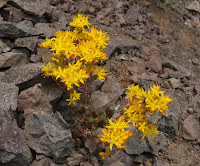 Posted by Unknown at (permalink) 7:42 PM No comments: