A rimey morning in Paradise...

A rimey morning in Paradise...  It's cold this morning, but it's also foggy.  That combination means that rime is forming on any surface that's below freezing.  Since it was well below freezing (air temperature) last night, that means just about everything is covered with rime, some so thickly that it looks almost like it snowed.  Some photos from around our yard: 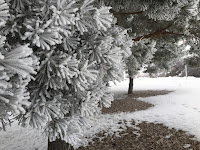 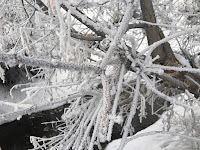 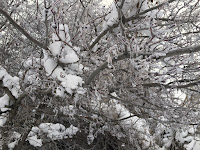 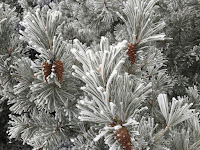 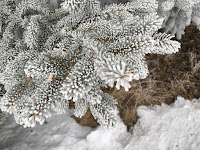 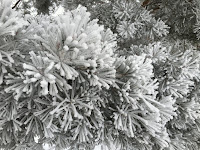 Like all the photos I've taken in the past few months, these were taken with an unmodified iPhone 6s Plus using the built-in camera app.  As usual, the only processing I've done is color-correction (for white balance) – for some reason, my iPhone wants to make outdoor shots have a bluish cast...
Posted by Unknown at (permalink) 8:36 AM No comments:

Paradise Porcupine ponders...  That's Porcupine Reservoir, which we took a short drive up to last night.  We'd heard from a fellow wildlife gawker that the road up to the reservoir had been plowed, and that there were elk to be seen up there.  Well, we got to the reservoir, but no further than the north edge of the dam – and that road had not been plowed.  Furthermore, we saw just one cow elk on the entire trip.

On the other hand, we saw quite a few deer, and a bald eagle soaring overhead.  And lots of beautiful winter scenery: 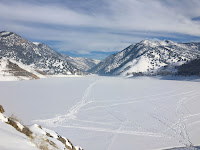 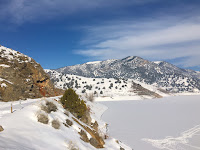 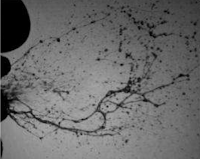 Sneezes...  More than you ever wanted to know, or (especially) see...
Posted by Unknown at (permalink) 2:31 AM No comments:

They're counting on you being stupid...

They're counting on you being stupid...  The American political parties, I mean.  There's a form of corruption that is, so far as I'm aware, uniquely American.  The two major organized political parties in the U.S. (the Democrats and the Republicans, if you've just emerged from under a rock) both have a vested interest in not letting you (the American voter) select the candidates that you want in the Presidential primaries.  They have two main methods of taking this power away from you:
The parties have other tools as well, some of which you can read about here.  If you do, you will likely emerge disillusioned about the state of democracy in the U.S.  Short version: your vote isn't as important as you think it is, despite the parties' attempts to convince you otherwise.

The “Party Purse” is easy enough to understand.  The two parties collect a lot of money through campaign contributions.  This money gets spent in various ways.  Some of it promotes the party in a way that is not specific to any candidate.  Most of it is eventually spent in support of a single candidate, though the means may be slightly subtle.  For instance, if the Republican party were to spend money on ads promoting one particular point of view on, say, immigration – that will be seen as supporting some candidates and not others.

The superdelegate system, on the other hand, is something the parties (especially the Democratic Party) would rather you didn't know about.  Certainly they don't go around bragging about it, and the media says remarkably little about it.  However, consider this: in the primary election just held in New Hampshire, Sanders took 60% of the vote, and Hillary less than 40%.  So Sanders should have 50% more delegates than Hillary, right?  Wrong.  Hillary has the same number as Sanders, because of superdelegates – party insiders – choosing her, despite the votes of New Hampshire party members.  The theory is, you see, that the superdelegates know better than the voters.  That's American democracy in action, folks.

What's the answer for the corruptions of the American two-party system?  Every once in a great while, a new political party emerges – when the voters have had enough, and want better.  That last happened with the emergence of the Republican party in the 1850s, and their first big success with the election of Abraham Lincoln.  It's been too long now – 160 years! – and the corruptions of incumbent power have long been a problem.  It's long past time for us to have another ballot box revolution, though I don't see one anywhere in the predictable future.

Maybe we need the equivalent of term limits for political parties :)

Posted by Unknown at (permalink) 2:28 AM No comments:

Things we have never seen before...

Things we have never seen before...   The image at right is a screenshot I captured from APOD at 2:55 am this morning.  They're teasing us!  But I think it's also a tell – an announcement of failure from LIGO could hardly be construed as “exciting”, but success certainly would.  On this flimsy premise, I'm assuming that LIGO is going to announce that they have conclusively observed gravitational waves.

For those of you who aren't followers of physics and cosmology discoveries :)...  This is a big deal, confirmation of a theory that originated with Einstein that has stood unproven for decades, despite many, many previous attempts to do so.  Physicists have spent their entire career trying – and failing – to actually observe gravitational waves...
Posted by Unknown at (permalink) 2:03 AM No comments: