When I first saw this photo, I thought it was some kind of an April Fool's joke.  But apparently it is completely on the level – this is one of four new crab species recently discoverred in the Philippines...
Posted by Unknown at (permalink) 6:57 AM No comments:

Inventor Bill Stone is building a robot specifically designed for the task of drilling through the ice “crust” of the Saturnian moon Europa.  It involves 5,000 watt lasers and fiber optics.  Awesome!
Posted by Unknown at (permalink) 6:53 AM No comments:

From APOD, of course: 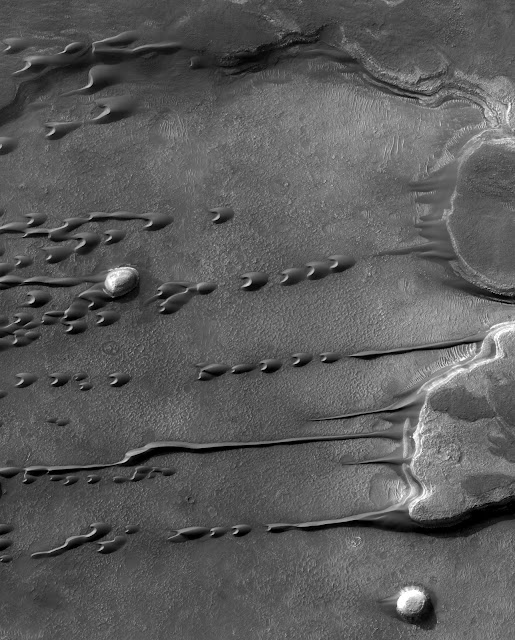 Posted by Unknown at (permalink) 6:42 AM No comments:

Indiana employers are being sued on the grounds that they're enslaving unions by hiring non-union workers.  From an article at the Daily Caller:

And being forced to work without compensation, the union suggested in its revised lawsuit, is slavery.

Strictly from the perspective of an observer of creative litigation, this is absolutely awesome.  Should it succeed, it would throw open the door for more creative lawsuits.  For example, I might consider suing my employer for enslavement – they're “forcing” me to spend unpaid hours on the road for my commute, because I live so far from my employer's offices.  Clearly they should either pay me for those hours of commute, or count them as work hours.  Slavers!

But from just about any other perspective (aside from the slavering socialists, anyway), this is more demonstration of the decay of legitimate purpose for labor unions (as if we really needed any!).  I'm not in favor of outlawing unions, or anything nearly so radical – despite these ludicrous excesses, they do occasionally have a legitimate purpose in the U.S.  But I would be in favor of some carefully-crafted limits on their power and reach – most especially for the public sector unions, who in places like California (at the state level) and San Diego (at the city level) virtually “own” our local governments...
Posted by Unknown at (permalink) 6:39 AM No comments:

A couple days ago, my neighbor Wayne told me that he'd seen a baby rattlesnake in his yard.  Yesterday, while mowing in our back yard, I saw three: one adult and two babies under a foot long (I transported them all to a lovely new home in Cleveland National Forest).  Then this morning I read this harrowing story of two parents trying to get care for their two-year old child who had been bitten by an adult rattler in Deerhorn Valley (just a couple miles south of Lawson Valley, where I live).  No word on the child's condition, other than that he or she is checked into Rady.

So it's that time of year, folks.  Watch your kids and your pets...
Posted by Unknown at (permalink) 6:26 AM No comments: