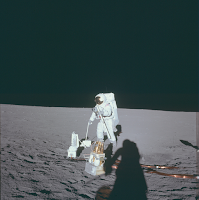 NASA dumps a whole bunch of photos ... from the Apollo missions.  The example (from Apollo 12) at right is just one of thousands...
Posted by Unknown at (permalink) 8:07 AM No comments:

Robots are not about to take over...

Robots are not about to take over...  Elon Musk, Bill Gates, and other very smart people are amazingly (to me, anyway) credulous on the subject of artificial intelligence and the dangers thereof.  So far as I'm concerned, that's on a par with people in the 1800s being terrified that going 50 MPH would prevent us from breathing (an actual, published, widely-believed fear).  Why?  This fellow has a good post about that.  And here MIT offers some additional evidence, though that's not their intent.  They're saying “Wow! Look at this!  We built a robot that (sort of) learned how to grasp things, on its own (sort of)!”  I read that article and think: 60 years of research and AI can't even duplicate one of the many feats of learning of a human infant.

The singularity isn't close at hand, folks.  It's not even within sight of the Hubble telescope, wealthy and smart pundits notwithstanding...
Posted by Unknown at (permalink) 7:53 AM No comments:

Quote of the day...  This time from the blog of Eric S. Raymond, on the subject of gun violence in the U.S.  He says:


Nobody wants to be honest about this except a handful of evil scumbag racists (and me).  Thus, the entire policy discussion around U.S. firearms is pretty much fucked from the word go.

He concludes that the right policy decision would be to decriminalize drugs and then see what the next highest driver of gun violence is.

I agree with that, though I don't share his optimism about how much gun violence would decline absent the war on drugs.

Eugene Volokh has a great post today on the same subject, too...
Posted by Unknown at (permalink) 7:45 AM No comments:

Birthday in Paradise, continued...  Yesterday afternoon we went (per Debbie's birthday wishes) for a wildlife-seeking drive up Blacksmith Fork Canyon toward Ant Flats.  We were a bit disappointed with the wildlife at first, as all we saw was some trout.  Then Debbie spotted a kingfisher (we think they're belted kingfishers we're seeing, like the one at right, which is not my photo, dang it!) and we felt a bit better about our success.  Shortly afterwards Debbie spotted something much more interesting: a young beaver!  It was roughly half the size of the adult beavers we've seen, and chugging fast downstream.  We're guessing it was born this past spring.  This was in Mill Creek, roughly a mile on Ant Flat Road from the turn off of state 101.  We had two good sightings of it, just 30 seconds or so each.  It disappeared from our view fairly close to its lodge, so we suspect it ducked in there to get away from us. 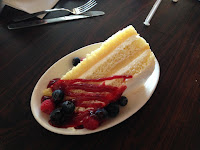 After that we headed to Jack's, Debbie's choice for a birthday dinner.  There we had a delicious soup (“chicken velvet”), an equally delicious pizza, and a killer dessert we've had several times before – their lemon cake, which we split a single gigantic piece of (my photo at left).  We always have great food and friendly service at Jack's, and yesterday was no exception.  But we had a special treat yesterday: the woman who creates their soups was there, and actually served us our soup.  We had a chance to talk with her, and telling her how much we've enjoyed her soups over the past year and a half.  When we discovered who she was, I told her that I felt like I should get out from my booth, then bow and genuflect before her.  Her smile and obvious pleasure at our enjoyment of her soups was a lot of fun for us :)  We talked with her for a while about her various creations, and she brought over a sample of another of her soups (one I couldn't possibly eat, though: cream of jalapeno).  That was a great experience, and especially nice as it was Debbie's birthday dinner.

Then (again at Debbie's request) we headed out over the pass toward Liberty for some more wildlife viewing.  We saw almost nothing this time.  There were a few deer in the farmers' fields before we got into the National Forest, but otherwise not a darned thing.  We did hear some intriguing bird calls (like a meadowlark, but with a different “tune”), but never managed to spot them.  Instead of wildlife, we got weirdness and a beautiful sunset.  In the first two photos below are bundles of bamboo sticks we found carefully hung on some tree trunks.  There were five bundles within a few feet of each other.  We couldn't imagine what the heck they were for, but guessed it might be an insect habitat.  A little googling led me to think they are intended for either mason or leaf-cutter bees.  Then about a quarter mile away, we found the “thing” in the next three photos.  It was lying on the ground, semi-hidden from the road behind a tree trunk.  On examining it carefully, I saw that it was made from layers of plastic foam with cardboard tubes inserted.  Five sides were covered in thin aluminum held together with duct tape (is there anything that duct tape can't do?).  The sixth side was open, but facing down.  After photographing it, I put it back exactly where it was.  Another insect habitat?  I couldn't find anything by googling, so this one remains a mystery.  Finally, the last photo is of the gorgeous sunset we enjoyed as we exited the canyon and drove toward Avon. 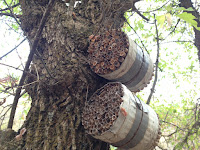 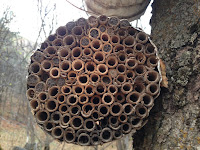 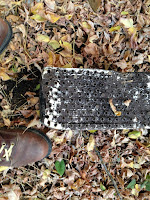 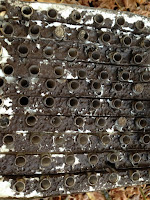 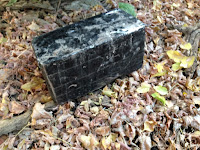 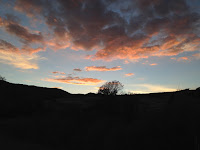 It was an especially lovely day in Paradise...
Posted by Unknown at (permalink) 6:23 AM 2 comments: