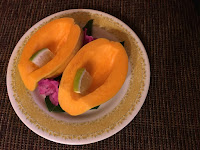 A lovely day in Hawai'i...  We woke before daybreak this morning, had a leisurely breakfast, supplied by Hale Ohia.  That papaya at right, with lime wedges, was part of it.  Two locally grown bananas and a mini-loaf of homemade banana bread was the rest, along with great coffee and tea.

First thing we did today was to set off on a walk we always make on our trips to the Big Island: the Kipuka Puaulu loop trail just a few miles from Kilauea Crater.  This trail is only a little over a mile long, with little elevation change, but it was our first test of how well Debbie could do on an actual hike.  She did really well!  Made it all around the loop without any problem at all; ended up tired but not hurting.  An excellent start, and an even better portent!

The photos below were all taken along the trail.  It's a beautiful place, full of native plants (the invaders are being eliminated carefully).  It's best known, though, for the birds that it attracts – in fact, an alternate name for it is “Bird Park”.  We saw lots of apapane, an elepaio, and an oma'o.  The apapane were downright common – we had more good sightings of that beautiful bird today than in all our previous visits combined.  The elepaio we've seen before, but never as close as the one we saw today, who was bathing in the water left in a stump.  The oma'o we have never seen before, and we only spotted it today with the assistance of a fellow we met on the trail who turned out to be a local who was also an avid birder.  Meeting him was a real stroke of luck – not only did he help us spot and identify birds in Kipuka Puaulu, he also told us of three other places to go see native birds.

The last photo below shows orange algae growing on the trunk of a koa tree.  This algae grew only on koa trees, but not all of them.  Perhaps one trunk out of 100 had this bright orange coating.  There was nothing obvious that told me why one tree had it and another didn't.  So far as I could tell, the algae did no harm to the host tree.  Strange thing...

We had a wonderful time on this hike today. 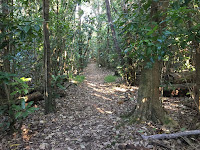 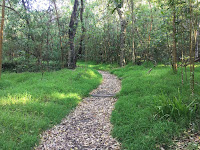 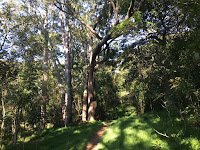 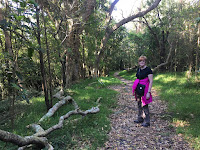 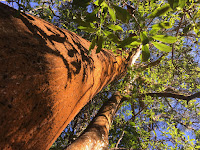 After the hike and bird-watching session, we stopped in at the Volcano Art Center (in the National Park), where we saw some really beautiful native woodworking.  Our favorite pieces were two rocking chairs made of curly mango wood.  Gorgeous, they were.  Then we took off for Hilo, where we visited Walmart to stock up on some supplies we'd missed, and then to Dragon Kitchen Sushi for our evening meal.  Dragon Kitchen was not the typical sushi joint.  It's one of three vendors in a small food court inside an old building along Hilo's waterfront.  In a tiny little kitchen, a sushi chef and a helper prepared all the food and acted as cashier.  You place your order at the counter, then they holler at you when it's ready – and you take your food to some tables shared by all the vendors.  It's quite inexpensive.  For less than $40, Debbie and I stuffed ourselves with great fish.  The sushi itself was also different, as it was made with brown rice instead of the usual white rice.  We liked it all very much, washed it down with some ice cold green tea.  We left with happy bellies and not a trace of hunger.

There was one rather unhappy moment today, though.  On the way to Hilo, we stopped at the studio of Dan DeLuz, a well-known wood turner in Kurtistown.  We had visited him many times over the years, and I've purchased a half dozen or so bowls that he turned from native woods (koa and milo, mainly).  On our last visit there, about 12 years ago, we had a long, relaxed conversation with him – about the native woods, his turning techniques, and life in general.  This afternoon when we drove up, there was a woman sitting outside his studio reading a book.  She asked us what we wanted, and when we said that we were here to see Dan she told us that he'd passed away five years ago.  She was his wife, Mary Lou, and we stayed and talked a while with her.  When she found out we'd been there before, had talked with Dan, and owned some of his bowls, she was instantly relaxed and friendly.  She also advised us to hang onto those bowls, as their value has gone up markedly since Dan passed away.  There's no way I would part with those bowls, anyway, as they're so beautiful.

It's sad to ponder the absence of someone like Dan...

Tomorrow we're going to get up early and head for Mauna Kea.  The forecast calls for clear skies, and they've been clear for a week – so the road should be good and dry, and we should have no problem making it all the way around the mountain.  At the moment I'm writing this, Debbie and I are enjoying a glass of champagne on the front porch of our little cabin.  The sun has just set.  We're surrounded by bird song in the ohia forest around our cabin.