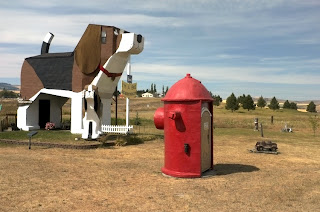 Debbie and I traveled to northern Idaho in the first week of September.  As is my want (:-), I took a few photos along the way.

First up: a bed and breakfast, just north of Grangeville, Idaho.  We stopped and talked with the proprietor and his wife for a while.  They clearly had some fun with this.  The “fire hydrant” at right is actually a functioning outhouse.  The beagle is a room you can rent – note the window just forward of his ear.  Cute.  There are several rooms like this.  We zoomed by, both of us exclaiming...then turned around to come back and check it out.  These are definitely “dog people”! 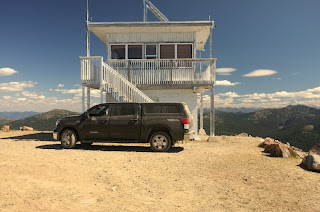 The main reason for our trip was to visit our property near Hope (which is on the north shore of Lake Pend Oreille).  We hadn't been there for over ten years, and it was high time for us to check up on it.

Our property is in a little “island” of private property inside a National Forest; we get to it from a National Forest gravel road.  Take that road a few miles further and you'll come to the Lunch Peak lookout, seen at left.  This looked much different than our memories of it, but we can't tell if that's because our memories are faulty or if the place has really changed.  Neither of us, for instance, remembered the lookout as being enclosed.  Nor did we remember it being locked and inaccessible.

On the way up and back from Lunch Peak, we stopped at a couple of places to pick huckleberries, which are prevalent in any open area.  They were just beginning to turn red for the fall color when we were there; this made it very easy to spot patches of huckleberries!  They were delicious – juicy, sweet, deep purple.  Yum! 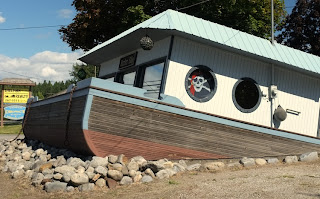 One of the days we were there, we drove up to Bonner's Ferry (very close to Canada) to do a little sightseeing. Just south of Bonner's Ferry we ran across this barber shop, called “The Barber Ship”. You can just barely make out the sign in the photo at right.

The entire building is tilted at a rakish angle, as though the Barber Ship were cresting a wave.  However, the floor inside is level – which makes for an odd-looking room in which two of the walls appear to be dangerously tilted.  We found lots of humorous signs all over Idaho, but more in Bonner's Ferry than anywhere else.  We're not sure where this culture of commercial humor came from, but we sure enjoyed it.  We also had a great meal in Bonner's Ferry – so good we had to come back another day for a repeat.  The place was called Papa Byrd's Bistro, and it had spectacularly good soups, the best pizza I've had in years, and an equally spectacular sandwich.  If you're ever up in Bonner's Ferry, don't miss that joint! 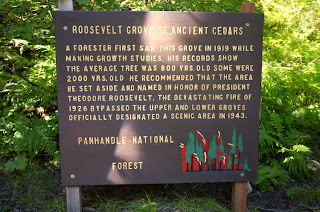 The last day we were in Idaho, we made a big loop over into Washington state, back through the National Forest to Priest Lake (in Idaho), then back to Sandpoint.  Just west of Priest Lake, we ran across the Roosevelt Grove of ancient (and giant!) cedar.  If you suffer from arborphilia (as I do), it's a place you won't want to miss.  Trees that are thousands of years old and towering over your head, with the trunks to match.  They look healthy, too (our conifers in San Diego County are suffering from years of drought and the ravages of bark beetles, though on the whole our cedars look better than anything else).

In the parking lot for Roosevelt Grove, we came across a phenomenon we've seen before: butterflies apparently attracted to the minerals on the ground.  Usually we've seen this alongside mudpuddles or on damp earth; here it was on bone-dry soil.  Later in the day we saw even more of them, for miles on the shoulders of a gravel road.  Whatever the reason, we've found you can approach these butterflies quite easily – they appear to be lost in rapture or something, not paying much attention to the large, dangerous humans stalking them with a camera! 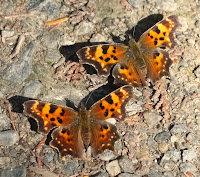 Posted by Unknown at (permalink) 11:34 AM No comments:

Just a moment ago, as I was working away in my office, I heard a soft snoring start up behind me.  I turned around in my chair to find Lea, our oldest dog, splayed out on the carpet, and I managed to snap the photo below without waking her. 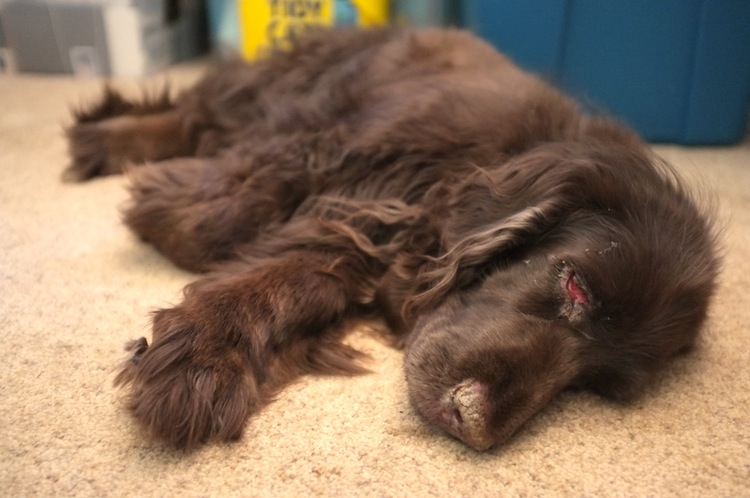 When I'm working at home I often find that she's parked herself close by me, seeming to take comfort or pleasure in my presence.  Some might say she's an unattractive dog – her weepy eyes build up dried mucus that we have to constantly clean, and her nose is similarly caked.  Her hair is all scraggly; she suffers from some unidentified disorder that has made her formerly luxurious, curly coat look more like a moth-eaten rug with a hormone problem.  We don't give her haircuts often because it stresses her out, and at her age, she doesn't need that.  She's otherwise actually quite healthy, and considering that she's about 16 years old (already much older than your average field spaniel attains), that's really saying something.

I think she's the most beautiful dog in the world.

Whenever I pay attention to her, she's ecstatically happy and her tail wags as fast as it can go (though that's not so fast these days).  She's always at the door to greet me when I come home, and mourns from the doorway when I leave.  She squeals with gratitude when I give her a treat (which I'm going to do right now - some warm milk).  I can do no wrong in her eyes.  She loves me no matter what mood I'm in, no matter what I'm doing.

I make a point of spending some time with Lea every day, because I don't know how much longer she'll be with us.  She's given us more pleasure and love than we can possibly reciprocate, though we try.  She's my beautiful girl, and don't you say otherwise...
Posted by Unknown at (permalink) 10:14 AM No comments:

There's a well-known “hack” that approximates an inverse square root (i.e., 1/x^0.5, or x^-0.5) with just a few adds, subtracts, a shift, and a multiply – and the “magic” hex constant 0x5f3759df.  On hardware lacking single-cycle floating point operations, this is remarkably efficient compared with the conventional approach.  I've used it myself, about 10 years ago, to speed up calculations in a Monte Carlo bond valuation simulation.  It was one of the few algorithms I've ever used whose inner workings were a complete mystery to me.

But it's a mystery no more, thanks to a lovely blog post on Hummus and Magnets, by Christian Plesner Hansen.  This post also links to a nice Wikipedia article on the same subject. I'm left in awe of the inventor's cleverness – the insight that the floating point's bit pattern could be mathematically manipulated is a classic hacker's trick.  And now I have a new tool in my hacker kit, as I've discovered that the algorithm can be extended to cover any power between -1 and 1.  Awesome!
Posted by Unknown at (permalink) 6:49 AM No comments:

Steyn Takes the Obama Administration to the Woodshed...

The inimitable Mark Steyn weighs in on the debacle in the Middle East.  An excerpt:


But Hillary Clinton and Gen. Martin Dempsey are guilty of something worse, in the Secretary of State's weirdly obsessive remarks about an obscure film supposedly disrespectful of Mohammed and the Chairman of the Joint Chiefs' telephone call to a private citizen, asking him if he could please ease up on the old Islamophobia.

Forget the free-speech arguments. In this case, as Secretary Clinton and Gen. Dempsey well know, the film has even less to do with anything than did the Danish cartoons or the schoolteacher's teddy bear or any of the other innumerable grievances of Islam. The 400-strong assault force in Benghazi showed up with RPGs and mortars: that's not a spontaneous movie protest; that's an act of war, and better planned and executed than the dying superpower's response to it. Secretary Clinton and Gen. Dempsey are, to put it mildly, misleading the American people when they suggest otherwise.

But do go read the whole thing...
Posted by Unknown at (permalink) 6:27 AM No comments:

Via my lovely bride, something that has been much on my mind recently (as I contemplate the outrageous taxes we're about to have stolen from us by The One's administration and his sidekick, Governor Moonbeam): 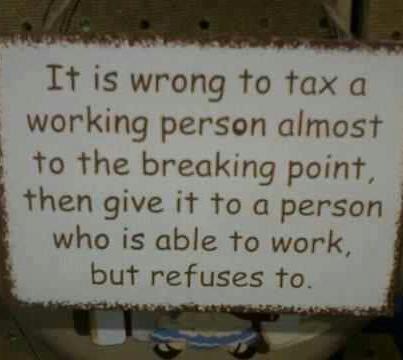