Paradise ponders...  There's some progress on our construction to report.  The excavated soil has been removed from around our new foundations, and some good topsoil has been brought in to fill in some low spots.  This morning, a truck drove in and dropped off the lumber for the sub-floors, I think enough for both the sun room and the mud room.  Some photos below.

The joists are interesting for how they're made (see ends in the first photo below).  In the bad old days, we'd have used solid fir 2x10s or maybe 2x12s (for a long enough span).  Not any more.  The joist of choice these days is 100% engineered wood.  The web (the long vertically-oriented bit of each joist in the first photo) is OSB (Oriented Strand Board) with the chips deliberately randomly oriented.  This provides a nearly ideal web, with equal strength in either tension or compression in all directions.  A solid board, with its grain oriented along the length of the board, must be thicker to achieve the same strength.  The flanges are made of 10-ply plywood, roughly an inch and a quarter thick.  These plies are all oriented linearly, and they are all clear (free of knots).  Taken together, they have the strength of a piece of perfectly clear solid wood, even though they're much longer than one would normally be able to buy clear wood.  They're perfectly straight, and not prone to warping.  They're also much cheaper than clear wood, as they can be made from short sections butt-jointed together (with only one layer jointed at any particular location).  It's really quite ingenious how these engineered wood joists simultaneously improve quality and strength while lowering cost. 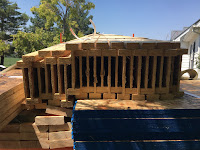 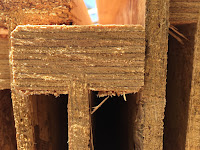 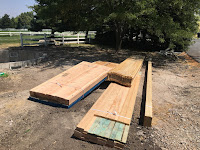 Posted by Unknown at (permalink) 12:06 PM No comments:

Healthcare insurance, part 75,992...  Just finished processing a small pile of EOBs (explanations of benefits), medical bills, and statements, and I feel the need to vent.

The document tally at the moment for Debbie's injury in May stands at 57.  All of these arrived in the mail; not one provider can do it electronically.  Once again I found the three things (EOBs, bills, and invoices) utterly impossible to reconcile with each other.  That means, of course, that I have no idea which ones are right.  I have absolutely no way of telling what I should be paying.  Everyone I've asked at the hospital commiserates – but can't really help either.

On the two occasions when I thought there might actually be an error (these were both with previous incidents, not Debbie's most recent injury), upon digging into them with the help of the hospital business staff we discovered items that weren't disclosed on any of the documents I received.  No matter how skilled I was at dissecting EOBs, bills, and statements, I'd never have been able to figure those out on my own.  What a mess!  It's as though you go to the grocery store and nothing is marked with a price, plus the store just added on random charges that they didn't bother telling you about – but expected you to pay nonetheless.

This situation isn't entirely Obamacare's fault, though the reporting requirements it added certainly contributed.  This all started, I think, with the standardization of insurance billing process – something that sounds good in theory, but in the end created an entire industry of “coding” (see ICD-10 codes), a nightmare mess of separate billing, and absolutely zero ability for the consumer (the patient) to select a provider based, even in part, on price.  The separate billing is like something out of a bad Hollywood script – except it's reality!  The last time Debbie visited her surgeon for a post-surgery followup, we received the following bills (and an allegedly matching EOB for each): the surgeon, the surgeon's office, the X-ray technician, the radiologist, the lab (for blood work), and a charge I have yet to figure out.  That's twelve bills and EOBs, for a 30 minute followup visit.  I have to believe there was more effort expended on the billing than on the actual visit!

What really rankles at the moment is this: because of Obamacare, I have no way to opt out of this craziness.  We must participate, or be penalized (and it's  a big damned penalty, too!).  That doesn't feel like America to me.  The government is dictating how we get our healthcare, and if I don't like it (and I don't!), I can't do anything about it.  That's a system that belongs in some place like China or North Korea, not here...
Posted by Unknown at (permalink) 11:51 AM No comments: