Two of our field spaniels (Mo'i and Lea) are getting to be ancient in dog years.  They're still healthy, but old enough that each day could be their last.  We give them lots of special attention these days, as you might imagine.  Recently I've often thought of Jimmy Stewart's famous poem about his dog Beau, which I'd only seen in writing before.  I just ran across his recital of it on (of all places) the Johnny Carson show:

Posted by Unknown at (permalink) 5:52 AM No comments:

Several readers inquired about my thoughts on Romney choosing Paul Ryan as his running mate.  Overall, I'm positive about it.  One article I read summed up my feelings pretty well with a single short phrase: “A grownup has shown up.”  That's what I like about the choice of Ryan – it signals Romney's intent to have an adult conversation with the voters about actual solutions to vexing, politically intractable problems like the ballooning costs of retirement and healthcare entitlements.  Ryan is a “wonk” who gives evidence of actually understanding how capitalism works, a rare trait in a national-level politician, and one to be cherished.  I also like the intellectual contrast between the Romney-Ryan ticket and the Obama-Biden ticket.  I think Obama's intellectual powers are vastly overrated, and Biden, of course, can just barely remember to breathe.  Romney and Ryan, on the other hand, are actual thinking, sentient beings.

There is one big concern that the Romney-Ryan ticket poses for me, however.  It seems clear that the only way they can win is if they have the adult conversation...and the voters respond like adults.  With over half of all Americans now on the dole to one degree or another, I'm not so sure that's going to happen.  I console myself with this thought: better to find out now if America is doomed, rather than a few elections down the pike.  Given the choice of Obama-Biden or Romney-Ryan, if the voters choose the former, I'll know there is no hope at all for our future.  Knowing that this November will give me more time to figure out where else I would rather live...

Now, my blog girl Rachel has a bit more enthusiasm for Ryan's selection – so much so that it took her three posts to get it all out of her system.  Put down your coffee first, and then read this in order: one, two, and three.  She shows several Iowahawk tweets, including the one at right which had me rolling on the floor and clutching my belly...
Posted by Unknown at (permalink) 5:25 AM No comments:

Now there's an unlikely sentiment!  Via my mom:


I was in Florida....and I saw a bumper sticker on a parked car that read 'I miss Newark.'

So I broke the window, stole the radio and left a note that read, "I hope this helps."

Posted by Unknown at (permalink) 4:59 AM No comments: 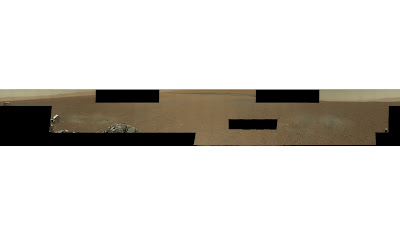 What with the “brain transplant” going on, I didn't expect more photos to be forthcoming, but there was a whole batch of them yesterday.  Some of them have been stitched together in a high-resolution panorama (at right, click to enlarge), which is fun to browse.  This is still, obviously, an incomplete view of the floor of Gale Crater around Curiosity.  I'm especially looking forward to the first high-resolution composites of Mt. Sharp. 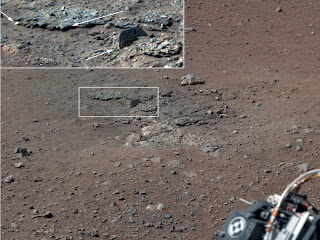 Also in today's “Curiosity mail” is the photo at left.  This one is showing a high-resolution view of an area scoured by the sky crane's rocket exhaust.  It's been “white-balanced”, which means the colors are not what the camera actually captured, but rather what they'd be if the scene was illuminated by pure white light.  By white-balancing the image, the scientists can see the rocks the way they would look if they were on Earth.  This makes it much easier for them to make identifications and comparisons.
Posted by Unknown at (permalink) 4:57 AM No comments:

While walking the dogs this morning at around 2:30, I saw 11 meteorites over about a five minute span.  Very nice!  Most of the ones I saw straddled the moon, in the northeast.

The dogs didn't care, naturally :-)
Posted by Unknown at (permalink) 4:22 AM No comments: