An Inspiration To Us All... 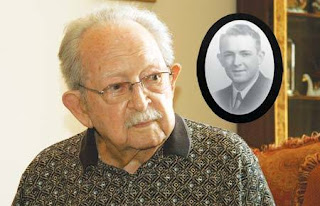 Via my cousin Mike D.:


As we get older we sometimes begin to doubt our ability to make a difference in the world.  It is at these  times that our hopes are boosted by the remarkable achievements of other Seniors who have found the courage to take on challenges that would make many of us wither.

Harold Sclumberg is such a person.

"I've often been asked, 'What do you old folks do now that you're retired'?   Well, I'm fortunate to have a chemical engineering background, and one of the things I enjoy most is turning beer, wine, Scotch, and margaritas into urine – I'm pretty good at it, too."

Posted by Unknown at (permalink) 4:56 AM No comments:

Cult of Personality in the Making?

More of my readers have written me about this video than anything else I've ever published.  On one level it seems perfectly innocent; just a bunch of schoolkids singing a song.  But then when you think about the words, and think about the influence this has on the kids, it seems very creepy.

As I watched it, the first thing I thought of were the videos that came out of North Korea a few years ago.  Those videos had many scenes of North Korean citizens paying homage to their leader, but the one that struck me hardest were the classroom scenes with the children mechanically singing the praises of their fearless leader.

Then I thought back to my own school days.  I cannot remember ever being asked to sing the praises of Eisenhower, Kennedy, or Johnson.  Nope, didn't happen.  We recited the Pledge of Alleigance in the mornings; we learned about Eisenhower's service in WWII; we learned about PT-109.  But no creepy paeans to our leader.  No cult.

Viewing this video, I thought “This may not end well.”, meaning Obama's presidency.  Think about this...think about the combination of this video and the proposal being floated to remove the restriction on the number of terms an American President may serve.  That starts to smell a lot like Hugo Chavez.  Or imagine a few years from now some close associate of Obama announcing his run for President – while promising to retain Obama as (say) the Secretary of State (like Putin in Russia).  The kind of personality cult building shown in this video inclines people to be worried about such things.

As they should be.

Posted by Unknown at (permalink) 4:51 AM No comments:

Have You No Shame?

An excellent speech by Benjamin Netanyahu, Prime Minister of Israel.  My favorite moment is when he asks the delegations gathered at the U.N. “Have you no shame?”