Paradise ponders, even more...  Mo'i is still steadily declining; he's getting weaker by the hour.  He's gone from drinking 50 times a day to just once or twice, and from eating just about anything you throw at him to only being interested in a little bit of fatty raw hamburger.  If you know Mo'i at all, then you know this absence of appetite is a powerful indicator that he is hurting badly.  The one and only time this has happened before was over three years ago when he got “bloat” and we almost lost him.  The outcome isn't so likely to be good this time.  We have an appointment for him tomorrow evening with our vet, and I'm afraid there's a good chance he won't be coming home with us ever again.  As you might imagine, Debbie and I have been spending quite a bit of time with him...

Around noon today I went over to Tim D.'s house to spray his lawn.  I also sprayed part of his horse pasture (at his request), because there were a few million dandelions established there.

Later I worked a bit more on the insulated plenum.  I fabricated a piece of OSB for the top outside piece, and mounted the duct connector into it.  I used my scroll saw to cut that circle, and it went through that OSB like butter.  I also built a square box of 2x3s around the side you see in that first photo; that will allow air to enter the duct from a square hole on the inside piece.  For Eric S., who asked what I use for a straightedge: in that second photo you can see what it looks like right after I cut off a 16" wide piece.  The straightedge is a milled piece of walnut :) 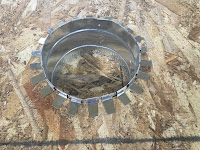 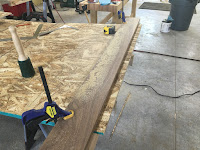 Posted by Unknown at (permalink) 3:48 PM No comments:

Paradise ponders...  Well, our goose has been off the nest for over 24 hours now.  So far there are just the two goslings in evidence.  Either she had the world's smallest clutch of eggs, or something got the rest of her goslings.  Dang.

The next step on my office heating system is to build an insulated plenum with a filter holder.  This is where the warm air from the first floor will go first, basically into a big box with a filter in the middle, then after being filtered into an insulated 7" diameter duct.  I'm building this plenum against an insulated wall, and on top of an insulated floor, so that means I have four insulated walls to build to make a fully enclosed box.  I started with the two sides, which are now finished.  You can see it in various stages of construction in the photos below, which are in order left-to-right. 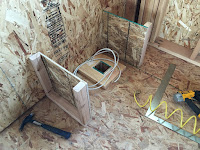 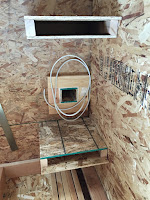 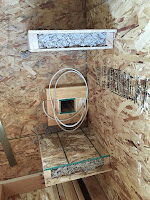 Having the right tools to do this with really makes this sort of thing easy to do.  The only addition I can think of that would have made it any easier would be a panel saw (for cutting 8' x 4' sheets of things like the OSB I used here).  Good panel saws are expensive, though, and my need (I think!) will be infrequent – so for now, at least, I'm sticking with a straightedge and a steady hand on the circular saw.

I started by installing the two partially finished walls in the right place.  I left one side off so that I could nail the 1x3 frames into the existing wall and floor.  The nail gun with 2" nails worked very well for this!  Then I nailed the final sides on, and (last photo) stuffed them with blow-in insulation (which I just fluffed by hand and stuffed in).

That insulation was slightly mysterious.  The marketing folks have “green” in every possible place they could on the package, and even in green ink.  They really, really want you to know that it's recycled (up to 85%!), itch-free (not like that nasty fiberglass stuff!), and safe.  What they don't tell you is that it's full of dust that will make you sneeze non-stop, your eyes will tear up, and you'll need to blow your nose approximately 10 times per minute.  They also don't bother mentioning what the stuff actually is made of.  This leads me to believe that they're not very proud of the ingredients, whatever they might be.  That rules out my favorite possibility: dehydrated, shredded politicians.  If that's what it was made of, you can be sure they'd be bragging about that!
Posted by Unknown at (permalink) 9:05 AM No comments: